Devoted KU basketball fans stand by their team; psychologists not at all surprised 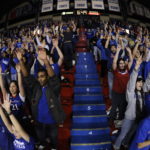 Kansas fans in the northern student section sing the Alma Mater before tipoff against Alcorn State during the first half, Wednesday, Dec. 2, 2009 at Allen Fieldhouse.

At Ladybird Diner in downtown Lawrence, Susan McCarthy was perusing the newspaper Thursday morning, trying to keep up with the latest news on the college basketball corruption trial underway in New York.

A devout KU basketball fan, McCarthy has had season tickets for decades. But at the moment, she is practicing tough love with her team, which has been in the news for several weeks during the federal trial for former Adidas representatives implicated in a college recruiting scandal.

“I hate to see it happen. I was hoping our program was as clean as it looks. But, I have my doubts. I love this team and I will love it no matter what. I feel so sad to be involved in this mess. It hurts.”

However, she firmly believes KU is not a victim. “It’s more they got caught. I think other teams are doing the same thing, and the Adidas thing backfired. I hate the money aspect.”

KU basketball fans are working at coping with their emotions right now because their identity as fans is threatened, said Dan Wann, a professor of psychology at Murray State University in Western Kentucky. Wann was the guest lecturer at KU on Wednesday evening, as part of the third annual Mawson Scholar Speaker Series. His book “Sports Fans: The Psychology and Social Impact of Spectators,” was just released.

“One thing KU fans are doing right now is being biased in their attribution and blaming a source not team-related,” Wann said.”They will try to externalize the blame and try to find a scapegoat.”

They will tell themselves, “We are not as bad as so-and-so; maybe we broke a few rules, but not the big rules,” Wann said.

Now that the trial has forced national attention on big-name shoe companies such as Adidas paying a player’s family to send their athlete to a certain university, McCarthy hopes all teams will deal with the issue.

“I hope it’s not pushed under the rug but the NCAA confronts it,” she said.

Around town, other KU basketball fans were searching for scapegoats. At Jock’s Nitch Sporting Goods, 837 Massachusetts St., where you can turn in any direction and spot a Jayhawk, Conner Riley was hanging some new KU apparel. The KU junior says he’s a basketball fan and accepts the way players are recruited.

“I’m under the assumption that everyone has done shady work,” Riley said. “College sports are that way.”

What’s important to him is that the players are treated right.

“When they go on to the NBA, I hope they’ll reflect positively on their time here,” Riley said.

Stepping into Rex Porter’s Stadium Barber Shop, 1033 Massachusetts St., is like walking into a shrine for KU athletics. Customers sit in crimson and blue chairs, jerseys from various sports cover the walls and ceiling, and athletes stop by for haircuts.

Porter, wearing an Adidas windbreaker, said he believes all college basketball teams are victims in the basketball corruption trial.

“We are in this world of shoe companies offering so much money to the kids,” Porter said.

However, regarding suggestive text messages between Self and Adidas consultant T.J. Gassnola (who has pleaded guilty to conspiracy to commit wire fraud), Porter said, “You can read anything into those conversations.”

“Our coaching staff hasn’t done anything wrong. It’s just hearsay. I have complete faith in our basketball program, and I’m proud to be part of the Jayhawk family,” Vigna said.

Omri Gillath, professor of psychology at the University of Kansas, is a devout KU sports fan. Plus, he understands the psychology of being part of the in-group. The in-group is not just sports teams; it can involve being part of a race or political party.

While people want their sports to be clean and pure, at the same time they will justify their team’s behavior, Gillath said.

He said “basking in reflective glory” is when your team is winning and you feel everything is great. However, on the negative side, when your team is under attack, you experience it as a threat to your sense of self.

Martin Watson, a devoted KU fan, is the owner of Watson’s Barber Shop, 925 Iowa St., where many of the basketball players come for haircuts. Sometimes Watson and his staff will go up to campus to offer cuts to the team.

“No matter what the outcome,” Watson said, with assurance, “KU basketball will survive.”

Tim “Nellie” Nelson, another barber at the shop, asked, “Is there any clean college programs? If you ain’t cheating, you ain’t trying, except for in marriage.”

Lawrence and KU basketball are synonymous for Charles Cornwell, who works in maintenance on the KU campus. He grew up in Lawrence and remembers his dad taking him to Hoch Auditorium to watch games. He watched such basketball legends as Clyde Lovellette and Wilt Chamberlain play.

The current events don’t come as a surprise to him.

“Losing coaches get fired and winning coaches are rehired,” Cornwell said. “To win, you have to have the best players. This has been going on forever. I don’t know how you can stop it.”