Former prosecutor: KU not in clear yet, but one past case provides hope 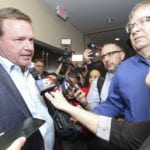 Even those with courtroom experience in cases involving NCAA corruption are reserving judgment as to what the ramifications will be for the Kansas basketball program from a federal indictment released Tuesday.

The indictment included material alleging that guardians for two members of this past season’s basketball team received payments from an Adidas executive who was steering them to Kansas.

“It’s hard to predict whether or not there will be additional information that will come out, either from further investigation, additional cooperation from participants or pretrial disclosure of the case,” said Stephen Hill Jr., a former U.S. attorney and current partner at Dentons in Kansas City, Mo. “But anyone who thinks this is done in a general sense, I think would be incorrect.”

In other words, people shouldn’t hypothesize that KU, its coaches and other officials are completely in the clear, yet. But Hill’s past work also shows that the university could still emerge from this case relatively unscathed even when it comes to NCAA violations.

In 1998, Hill was on the team that wrote the indictment in a case against former Kansas City-based AAU coach Myron Piggie. That case and the ongoing one from the U.S. Attorney for the Southern District of New York differ in many ways, but share some of the same language: schemes, secret payments, defrauding.

In the case from two decades ago, Piggie was sentenced to 37 months in prison, three years supervised release and ordered to pay more than $320,000 in restitution. And some of the schools who had players involved did face NCAA penalties. But one also did not. Duke largely avoided NCAA penalties because it successfully was able to prove to the NCAA that it did not know of the illegal payments made to one star player.

Thus far, federal prosecutors have not alleged that any KU coach or officials knew of the alleged payments made to the mother and guardian of two KU recruits.

The Piggie case involved direct payments to players. Today’s, at least to this point and as it pertains to KU, is focused on alleged payments made by Adidas executive Jim Gatto and two colleagues to a parent of one KU player and guardian of another.

In both cases, four universities technically were considered victims of fraud, based on illegal payments that compromised the amateur status of the athletes.

Hill said he read the 36-page indictment and explained why it’s obvious to him that not everything the feds have uncovered was included in it.

“They want to put forth as much factual information as necessary to demonstrate that a violation of federal law has occurred, as opposed to trying to convict the defendants of the allegations,” Hill said. “And it’s fair to say that they have not come forward with all of their information. You see they use references, but not full identities, for individuals involved in the alleged schemes. That’s just one example of how they have held back some of the information.”

Hill explained that neither the school nor either individual, at this point, was in any legal trouble because the current indictment is simply a case against three defendants: Gatto and Merl Code, of Adidas, and Christian Dawkins, who at various times had run an AAU basketball program and worked for Andy Miller, a player agent. The indictment alleges they defrauded four universities that currently hold sponsorship deals with Adidas.

“I did not see anywhere, nor do I believe that we were thought of to be anything other than a victim in the situation,” Kansas basketball coach Bill Self said after Tuesday’s postseason banquet.

According to Hill, that stance by Self and KU is both fairly standard and solid in such scenarios.

“It’s not out of line for the University of Kansas and its representatives to point to that indictment and say the legal theory alleges that we were defrauded,” Hill said. “I think that’s a perfectly appropriate position to take.”

That’s legally speaking. However, Hill conceded that, from a common-sense standpoint, such a claim might not be as widely accepted. He pointed to his experience with the Piggie case as the reason why.

“When we were doing our investigation and speaking with high-profile college coaches, one of them said to us, ‘We know the problems that are associated with summer basketball and the connection between those representatives and the colleges and universities that are trying to recruit these kids,'” Hill recalled. “Clearly, since that time period, high-level coaches have been on notice that this is an area that has a high level of risk associated with it.

“I think our indictment put all of college basketball on notice that there was a problem. It was a very high-profile investigation and indictment that I think everyone in college basketball was familiar with. So the notion that schools are caught by surprise by the general problem, I think, is subject to criticism.”

What happens next, however long it may take to come, will be key for KU and any potential eligibility issues that could land in the Jayhawks’ locker room as a result of the investigation.

Although neither the player nor his guardian was named, dates in the most recent indictment identifying a player who committed to KU on Aug. 30, 2017, match up with the timeline of freshman Silvio De Sousa’s commitment to KU.

De Sousa guardian Fenny Falmagne twice this week told the Journal-World that neither he nor De Sousa ever took money from anyone.

One thing worth noting about the position that a lack of knowledge about the alleged illegal payments could keep De Sousa eligible and also keep KU from having to vacate victories in which De Sousa played — including KU’s participation in the 2018 Final Four — is Hill’s recollection of one more aspect of the Piggie case 20 years ago.

“It’s a sound legal theory that this fraudulent conduct defrauds the universities,” Hill said. “I can’t speak for the NCAA and what they’ll do here; however, in our case, they visited penalties on individual players and required the schools to come in and explain how they were not aware of the fraudulent conduct.”

Hill indicated that he would be surprised if federal investigators had finished gathering information.

“It’s fair to say,” Hill began, “that based on the level of detail in this superseding indictment, as well as the public statements of federal agents, that this is still an ongoing investigation, which means that they continue to try to find every piece of information that either supports these charges or would support additional charges.”

At the end of the Piggie case, which involved blue-blood programs UCLA and Duke, along with Missouri and Oklahoma State, only Duke avoided severe penalties from the NCAA.

In 2004, five years after former Duke star and Piggie prospect Corey Maggette helped lead Duke to the 1999 national title game and after the 1998-99 season was found to be ineligible for accepting money from Piggie, the NCAA ruled that Duke would not be penalized for Maggette’s participation.

According to a Los Angeles Times article dated April 2, 2004, “the distinction was that Duke was not aware of Maggette’s eligibility issue when he played in the Final Four in 1999, despite rumors of improprieties.”

The three other schools involved in the Piggie case each were required to withhold their ineligible players from competition for extended periods.

In addition, the four schools combined, according to court documents, lost nearly $250,000, dubbed “intangible harms to the universities,” which included negative publicity, diminished support from donors, merchandise and ticket sales, and other revenue losses.

As for the current scandal and its impact on KU, one question now is whether Kansas, now that it has become officially tied to the investigation, will be proactive in the manner Duke was 20 years ago or reactive and wait to see what else federal investigators might expose.