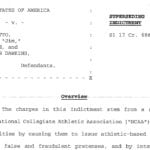 The U.S. Attorney's Office for the Southern District of New York is alleging in a federal indictment that an employee of an apparel company illegally paid the family of a University of Kansas basketball player.

The superseding indictment — which names multiple other NCAA Division I schools — expands the scope of previously filed wire fraud conspiracy allegations against Jim Gatto and two associates, Merl Code and Christian Dawkins, the U.S. Attorney’s Office for the Southern District of New York announced on Tuesday.

The parent of one of the KU athletes received at least $90,000 from Gatto’s global athletic apparel company in exchange for signing with KU, the indictment alleges.

The guardian of the second KU athlete received enough money from Gatto’s company to convince him to get “out from under” an illicit payment deal already set up with a rival apparel company to sign with one of the other company’s sponsored schools. That athlete then committed to KU, the indictment says.

The indictment does not accuse KU of wrongdoing. The parent and guardian are described as “scheme participants” but are not charged with crimes in the indictment.

KU on Tuesday evening released a statement saying that it would fully cooperate with investigators.

“Earlier today, we learned that the University of Kansas is named as a victim in a federal indictment,” the statement from Joe Monaco, KU’s director of strategic communications, read. “The indictment does not suggest any wrongdoing by the university, its coaches or its staff. We will cooperate fully with investigators in this matter. Because this is an active investigation, it is not appropriate for us to comment further at this time.”

KU basketball coach Bill Self also addressed the matter at the team’s annual basketball banquet, which was held Tuesday evening. He acknowledged the situation was still developing.

“So, yeah, there’s some unknowns there that obviously would be a concern to anybody that is involved in the sport right now,” Self said in response to questions. “But I’m not to the point where I feel like that there’s been wrongdoing on behalf of anyone associated with us.”

Gatto, Code and Dawkins stand charged with multiple counts of wire fraud and conspiracy for allegedly making payments to the families of six student athletes — including the two from KU — to convince them to attend certain NCAA Division I schools, all of which were sponsored by Gatto’s company, according to the indictment.

The indictment does not name any athlete, parent or guardian.

It also does not name the company Gatto was affiliated with, but he is an Adidas executive, and KU is an Adidas-sponsored school.

In exchange for payments up to $150,000 apiece in some cases, those students agreed to attend schools sponsored by Gatto’s company, with the expectation they would later sign “lucrative contracts” benefitting the defendants when they made it to the NBA, the indictment alleges.

Gatto was head of Global Sports Marketing – Basketball for his company, and had a multimillion-dollar annual budget. Code was a consultant for Gatto’s company and its high school and college basketball programs.

Gatto, Code and another unnamed company consultant aimed to convince players to go to schools sponsored by Gatto’s company and sign endorsements with the company when they went pro, the indictment alleges.

The other defendant, Dawkins, worked for sports management companies and brokered and facilitated some of the payments along with an unnamed financial advisor. Again, the indictment alleges, the expectation was that the players would retain their services once they got to the NBA.

The defendants, the families they conspired with “and, in certain instances, one or more corrupt coaches at the universities,” knew that for the scheme to work they had to conceal the illicit payments and falsely certify to their universities that the players were eligible.

NCAA rules mandate that student-athletes must be “protected from exploitation by professional and commercial enterprises” and can be deemed ineligible to compete if they or their relatives — whether the athlete knows it or not — accept prohibited financial benefits. Athletes who compete despite not being eligible can subject their schools to NCAA penalties, including forfeiture of games and titles, plus restrictions on future recruiting and postseason eligibility.

The at least $90,000 deal with the first KU player’s mother began around October 2016, shortly after the player, “who was considered one of the top recruits in his class,” unofficially committed to KU, the indictment said.

The illegal activity continued until at least November 2017, the indictment said.

The indictment includes some specific payment dates and sums, and it outlines allegations involving that mother and player as follows:

The mother received the money in a series of installments, funneled from Gatto’s company and through an AAU team controlled by the unnamed consultant.

At one point in October 2016, the consultant affiliated with the AAU team personally delivered about $30,000 in cash to the mother at a hotel room in New York City.

Around Nov. 9, 2016, that athlete and his mother signed paperwork committing to KU and certifying their understanding that eligibility must be maintained to play for the Jayhawks.

Illicit payments continued after that.

The indictment describes the second KU player as “a top-rated high school basketball player” and alleges payments were made to his legal guardian.

Not only did the defendants pay that player’s guardian to choose KU, the indictment alleges, they paid enough to turn the player away from a previous illicit deal with a competing company.

The allegations surrounding that player, according to the indictment, are as follows:

Around August 2017, the guardian told the consultant — the same one involved with the first player — that the guardian “had received illicit payments in return for a commitment to steer the student-athlete to a university sponsored by a rival athletic apparel company.”

“According to Guardian-1, the student-athlete was more interested in attending the University of Kansas, but Guardian-1 would need to repay the illicit payments in order to do so.”

The consultant agreed, and confirmed that Gatto was on board.

“On August 30, 2017, in what media reports called a ‘surprise’ decision, the student-athlete announced he would not attend the school sponsored by the rival apparel company but would instead enroll at the University of Kansas.”

In a September 2017 phone call the consultant told Gatto they would need to make “another $20,000” payment to the guardian in order to get the athlete “out from under” the previous illicit deal.

That player and guardian signed paperwork with KU around November 13, 2017.

The indictment does not allege that any KU coaches were involved.

However, it alleges specific and flagrant wrongdoing by unnamed coaches at some of the other schools.

In one case, a North Carolina State coach was the middle-man between the defendants and a parent, taking a $40,000 payment and agreeing to give it to the parent of a player who was threatening to de-commit, the indictment says.

More than one Louisville coach was directly involved in talks with the defendants, including one meeting where an envelope containing over $12,000 cash for the parent of a recruit was handed to the consultant, the indictment alleges.

The U.S. Attorney’s Office emphasized in its news release that their investigation remains ongoing — there’s even a special national FBI hotline set up to take in tips.

“The FBI strongly encourages anyone with information they believe to be relevant to contact the FBI by calling a special hot line established to receive tips in connection with this investigation: 212-384-2135,” the news release said.

In the case of the first player, whose family was alleged to have received $90,000, the indictment states the agreement to pay the family was made in or around October 2016 “shortly after the student-athlete, who was considered one of the top recruits in his class, unofficially committed to attend the University of Kansas.”

On Oct. 1 prized recruit Billy Preston attended KU’s Late Night in the Phog event. He then officially committed to KU in November. Preston never played in an official game for KU. His amateur status came into question after a minor car accident in November drew attention to the vehicle he was driving and caused KU to look into the “financial picture” of the car. Preston later left the KU basketball team and signed a contract in January to play professionally in Europe.

In the case of the second player, whose guardian allegedly received at least a $20,000 payment through Gatto, the indictment states the player announced on Aug. 30, 2017 that he had decided to attend the University of Kansas. Current KU basketball player Silvio De Sousa announced his commitment to KU on Aug. 30, 2017. Unlike Preston, De Sousa played in multiple games for KU this season, which could subject KU to NCAA penalties, if the allegations in fact do involve De Sousa and are found to be true.

“The kids and I never took money from anyone,” Falmagne told the Journal-World. “This is bigger than basketball. These kids and I have sacrificed so much because we know this could change our countries and nation. Anyone that knows me will know that coach Larry Brown is the only person that I take advice from because (of what) he means to me and the kids. He told me, ‘Fenny, the people at Kansas are good people and will help Silvio achieve his dream.’ And look what it did listening him. (Silvio) made it to the Final Four and got significantly better.”