Self declines to comment on testimony of former Adidas consultant; questions surface about KU compliance 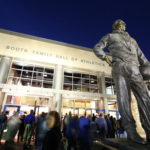 As a trial focused on corruption in college basketball continues, details of the University of Kansas’ involvement in the case are evolving.

During the trial on Wednesday, the defense for the men who are accused of fraud by paying the families of college basketball players — making them ineligible to play — without the universities’ knowledge introduced evidence that in two instances KU did not properly fill out compliance paperwork for former player Billy Preston, according to a CBS Sports report. What type of evidence was presented was not included in the report.

The revelation could show the university did not have a proper compliance method in place. How the NCAA will use this information is yet to be determined.

Previously, the Journal-World reported that if the NCAA takes action in the case, it will likely look to see if the university has a proper compliance system on checking if players are eligible to play. If the university does not have a proper system, the NCAA could charge the university with lack of institutional control, a major NCAA violation.

University of Kansas basketball coach Bill Self, shortly after KU’s annual media day Wednesday, declined to comment on the testimony of former Adidas consultant T.J. Gassnola regarding his relationship with Kansas.

At a federal fraud trial in New York, Gassnola, who pleaded guilty to wire fraud charges in March and is cooperating with the government in the case, testified that a cadre of fixers conducted covert “black ops” to funnel secret cash payments to the families or guardians of top prospects, including former KU player Billy Preston and current KU player Silvio De Sousa.

“I can’t talk about that,” Self said. “And I’m not meaning to be opaque about this at all. I just feel that our stance is still the same. We’ll comment when the time’s appropriate. And the appropriate time is when this is done.”

The university has previously declined to comment to the Journal-World about the ongoing trial.

Dan Wetzel, a Yahoo! Sports columnist covering the trial, said the case includes information that implies that Self and Gassnola had conversations about recruiting.

“A report Gassnola wrote did include that he ‘met with Coach Self and his staff … talked recruiting targets … assured them we are here to help,'” Wetzel tweeted.

Asked during the trial whose families he brokered deals with, Gassnola ticked off a list of five names, including DeAndre Ayton, who attended Arizona for his freshman season before being drafted by the Phoenix Suns, and Brian Bowen Jr., who committed to Louisville before departing without playing amid the widening recruitment scandal. Gassnola also named Preston and De Sousa, as well as Dennis Smith Jr. of North Carolina State.

Gassnola said he and other fixers referred to the deal-making as “black ops.” Asked what he meant, he responded, “It’s dark. Underground. You don’t want anyone to know about it.”

On trial are aspiring sports agent Christian Dawkins, former amateur coach Merl Code and former Adidas executive James Gatto. All have pleaded not guilty to charges of conspiracy and fraud in connection to the payments that were made to top recruits.

During the trial, prosecutors have repeatedly said that schools like KU are victims because they were unaware of the payments to their players and could have been at risk of NCAA sanctions and the loss of millions of dollars.

Defense lawyers, though, placed the blame largely on the schools’ lust for basketball glory, saying blue-chip athletes were used to attract tens of millions of dollars in donations and revenues.

Gassnola was expected to return to the witness stand Thursday in federal court in Manhattan.

Earlier, the jury heard from college administrators in charge of making sure Kansas and North Carolina State complied with NCAA rules. Both said that they were unaware of payments that would have made some of their biggest players ineligible.

“I didn’t know anything about that,” Jeff Smith, KU Athletics senior director of compliance, responded about an alleged scheme to channel $90,000 to Preston’s mother.

Jeff Smith also testified that the university first became aware of potential eligibility issues for De Sousa in April, according to a tweet from Matt Norlander, a college basketball reporter for CBS Sports.

When asked if he had any knowledge of De Sousa being ineligible, Jeff Smith said, “At this point, I do not.”

According to a report from ESPN.com’s Jeff Borzello, Smith also was asked Wednesday about a document showing De Sousa agreed to a contract with a professional team in Spain along with a document showing an agreement between De Sousa and an agent. The report states that Smith said Kansas became aware of the matters and took steps to look into them.

De Sousa, who committed to Kansas in August 2017, graduated from IMG Academy a semester early and was enrolled at KU in time for the start of the second semester, when he played in 20 games while helping lead the Jayhawks to the Final Four.

De Sousa arrived at KU in late December and was held out of competition until Jan. 13 while waiting to be cleared by the NCAA, which he eventually was.

Carrie Doyle, compliance director for North Carolina State, had a similar response as Smith when asked if the school knew about a $40,000 payment made to Dennis Smith Jr.’s father. She said there was some worry that former Wolfpack football player Eric Leak was involved in Dennis Smith Jr.’s recruitment despite the fact that he was barred from campus for providing improper benefits to two other players.

Dennis Smith Jr. spent one year at North Carolina State and now plays for the Dallas Mavericks; Preston left Kansas without playing a game and is under contract with the Cleveland Cavaliers in a developmental league.

Bowen, whose father testified at the trial about taking money, is playing professionally in Australia.

When asked Wednesday if he was glad that investigation had now reached the trial stage, Self said he was.

Although Jeff Smith was called to testify in the trial, Self said he did not think any members of his staff would be.

— The Associated Press and Journal-World reporters Dylan Lysen and Matt Tait contributed to this report.