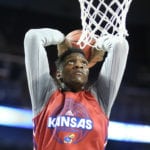 Kansas forward Silvio De Sousa comes in for a dunk during practice on Wednesday, March 14, 2018 at Intrust Bank Arena in Wichita, Kan.

The University of Kansas has “tacitly acknowledged” it has been subpoenaed by federal officials as part of a broad investigation into college basketball, according to a report by Yahoo Sports.

Yahoo Sports filed an open records request seeking any subpoenas KU has received related to the federal college basketball investigation since September 2017. KU officials acknowledged they had documents “responsive” to the request, but declined to turn over any of those documents. KU officials, however, added they are “cooperating with the government inquiry.”

The revelation comes four days after the University of Maryland acknowledged it had received a federal subpoena on June 29 related to its recruitment of KU forward Silvio De Sousa, a sophomore from Angola, who ultimately signed to play for Kansas and appeared in 20 games for the Jayhawks during their run to the 2018 Final Four.

It is unclear when KU was subpoenaed, and KU did not provide any information about whether information regarding De Sousa was the subject of the subpoena. De Sousa, however, has been linked to the investigation since April, when a federal indictment alleged a guardian of a Kansas basketball recruit received improper payment through a shoe company representative.

According to both Tuesday’s report and KU’s response, which was obtained by the Journal-World on Tuesday morning, Yahoo’s request was denied on the basis of the following exemptions from the Kansas Open Records Act:

• A federal law known as the Family Education Rights and Privacy Act (FERPA), which, according to a government web site, “protects the privacy of student education records.”

• An exemption that states that public records containing information of a personal nature where the public disclosure thereof would constitute a clearly unwarranted invasion of personal privacy.

• A criminal investigation provision, which Mike Leitch, Associate General Counsel for KU, explained via email was relevant because the superseding indictment filed in April “has not identified any University student or employee by name.” The indictment did, however, reference the guardian of a KU player who committed to KU on Aug. 30, 2017 (the same date as De Sousa’s commitment) as having taken a $20,000 payment from an Adidas employee.

Yahoo’s initial request for the documents was sent, via email, on April 10 and KU — the university not the athletic department — responded on April 13.

In an article titled, “Why Maryland Receiving FBI Subpoenas Should Worry Other College Programs, Basketball Players,” written last week by Sports Illustrated legal analyst Michael McCann in the wake of the Maryland news, McCann on a couple of occasions pointed out exactly what it means to be subpoenaed.

“It is worth stressing that being subpoenaed does not imply wrongdoing,” McCann wrote. “A subpoena is a request that compels production of documents or witness statements relevant to a case or investigation. Many persons and businesses that have done nothing wrong can be subpoenaed.”

Both De Sousa’s guardian, Fenny Falmagne, and KU officials, including head basketball coach Bill Self, have maintained that De Sousa has done nothing to jeopardize his status for the 2018-19 season.

On April 10, the university released the following statement regarding the superseding indictment.

“Earlier today, we learned that the University of Kansas is named as a victim in a federal indictment. The indictment does not suggest any wrongdoing by the university, its coaches or its staff. We will cooperate fully with investigators in this matter. Because this is an active investigation, it is not appropriate for us to comment further at this time.”

As recently as last month, both Self and De Sousa reiterated that they were not concerned about the 6-foot-9, 245-pound forward’s status for the upcoming season.

“I haven’t heard one thing to the contrary,” said Self when asked if he thought the sophomore from Angola who joined the KU program last December after reclassifying and leaving high school a year early, would be able to play during the 2018-19 season. “All our guys were cleared by the NCAA. They were eligible last year and we haven’t heard anything that that was not the case still.”

Self also classified KU as being “in a good place” with regard to De Sousa’s status.