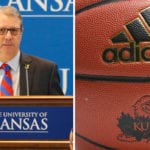 University of Kansas Chancellor Douglas Girod said Friday that he doesn’t plan to seek an independent investigation of the Kansas athletics department in the wake of a growing college basketball scandal.

A federal indictment on Tuesday alleges a family member and a guardian of two KU basketball players were paid, in total, at least $130,000 as part of a pay-to-play scheme by an executive of Adidas, which has a multimillion-dollar partnership with Kansas Athletics Inc.

Girod said he has “complete confidence” in the athletic department’s adherence to NCAA rules.

“The university constantly evaluates its processes to ensure we are in compliance and using best practices,” Girod said in a statement. “Last fall when news of the FBI probe first broke, the NCAA directed all Division I programs to examine their men’s basketball programs. We did that, with third-party assistance, and at the conclusion of that process, we expressed our complete confidence that our staff understand and follow the rules — and that hasn’t changed. The recent indictment names KU as a victim and asserts that unlawful activities were deliberately concealed from KU officials. The indictment does not suggest any wrongdoing by the university, its coaches or its staff.”

It wasn’t immediately clear what specific findings the NCAA-mandated examination referred to by Girod produced. The Journal-World has asked the chancellor’s office for all written reports related to that examination.

In October, the Journal-World reported that the athletic department hired the Overland Park law firm of Bond, Schoeneck and King to assist with the review. But, at the time, KU Athletics spokesman Jim Marchiony noted that the department wasn’t conducting an outside review and that most of the work would be done by KU staff.

“We are not asking them to come in and conduct an examination,” Marchiony said of the law firm. “We’re going to ask them to help us make sure that we’re doing it correctly and that we dot all the i’s and cross all the t’s.”

Since the pay-for-play scandal emerged in September, KU has become more directly involved. Tuesday’s indictment was the first one that mentioned KU. Tuesday’s indictment also shed more light on the practices of an Adidas executive and two Adidas consultants who are alleged to have played key roles in the scheme.

One of the Adidas consultants reportedly is a former Massachusetts AAU coach with a significant criminal history, who also had been punished by the NCAA for alleged ties to an NBA agent. The New York Times, citing two sources close to the investigation, reported T.J. Gassnola is the Adidas consultant who is implicated in the indictment. The indictment alleges he had direct contact with a guardian of a KU recruit and arranged for at least $40,000 in payments to the guardian.

Despite Gassnola’s history — he has admitted to once being involved in bookmaking — he continued to be employed as a consultant by Adidas, according to the indictment.

KU officials must decide whether they want to remain affiliated with Adidas. The school and the company announced in September a $191 million, 14-year extension for Adidas to serve as the shoe and athletic apparel provider for KU Athletics. However, that deal has not been signed.

On Friday, Girod offered little guidance on when or whether the extension would be signed.

“We constantly evaluate our arrangements with partners and sponsors,” Girod said in a statement. “Like universities across the country, we will continue to monitor the situation, evaluate new information, and make decisions that are in the best interest of our university and students.”

The chancellor’s statements on Friday did not address in detail several other questions posed by the Journal-World. They include:

• Whether the chancellor will play any formal role in authorizing the extension of the Adidas contract or whether that will be left to the discretion of the athletics department.

• Whether the university has employed anyone to evaluate what type of penalties it could face from the NCAA — and what type of defense may be required — if the allegations in the indictment are proven true.

Currently, KU coaches or officials are not the subject of any allegations in the criminal indictment. That is not the case with the three other schools that were included in Tuesday’s indictment. While the indictment doesn’t include charges against any coaches, it describes potential wrongdoing on the part of coaches at Louisville, Miami and North Carolina State.

As Girod’s statement notes, KU is listed as a victim in the indictment. The case is built on the legal theory that the university was defrauded as a result of student-athletes who were ineligible to compete taking scholarship dollars and financial aid from the university. The other three schools, despite allegations of wrongdoing by some school officials, also were listed as victims in the indictment.