‘We good?’ ‘Always’: Texts between Self, fixer presented in college basketball corruption trial 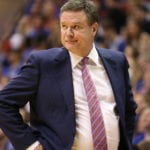 Kansas head coach Bill Self casts a look at his players during the second half on Friday, Nov. 24, 2017 at Allen Fieldhouse.

Although a former Adidas consultant testified in federal court on Monday that he never told University of Kansas basketball coaches about paying the families of players, text messages between him and KU coaches Bill Self and Kurtis Townsend show they were aware of some sort of involvement in recruiting.

In a federal trial in New York, ex-Adidas consultant Thomas “T.J.” Gassnola, a key government witness, was confronted during cross-examination with a record of texts he exchanged with Self.

Lawyers for ex-Adidas executive Jim Gatto have sought to use the texts to show that various basketball programs were aware of efforts to funnel secret payments to the families of Silvio De Sousa, a KU player, and other top-flight recruits.

According to an ESPN report, text messages dated Aug. 9, 2017, showed Townsend sending a message to Gassnola that said, “Coach Self just talked to Fenny let me know how it goes,” referring to Fenny Falmagne, the guardian of De Sousa, who is from Angola.

Gassnola and Self did in fact have a five-minute phone conversation later that day, according to the report. The FBI did not wiretap the call and Gassnola said he did not recall what he and Self talked about.

Gassnola testified that he did not tell Self or Townsend that he paid $2,500 to De Sousa’s guardian for online college courses, according to Adam Zagoria, who is covering the trial.

Self previously told the Journal-World he would not comment on the trial until it finishes.

In another text message shown in court, on Aug. 19, 2017, just days before KU announced a 12-year agreement with Adidas, Gassnola sent a text message to Self thanking him for helping to finish the deal, according to the report.

“That’s how ur works. At UNC and Duke,” Self responded. Gassnola said at Kentucky as well.

“I promise you I got this,” Gassnola wrote. “I have never let you down. Except Dyondre lol. We will get it right.”

Gassnola said the name “Dyondre” was in reference to Deandre Ayton. He previously testified in court that he tried to recruit Ayton to attend KU and he felt he let Self down when he failed and Ayton attended the University of Arizona, a Nike-sponsored school.

In another text message shown in court, dated Aug. 26, 2017, Townsend forwarded Gassnola a message that he said he’d received from Falmagne: “Coach has been on the phone with Angola. We are good to go. We will commit tomorrow.”

Gassnola previously testified Townsend asked him to connect Falmagne to Adidas, as Falmagne was looking to get Adidas gear for the Angolan National Team. Gassnola said he told Self and Townsend about Falmagne’s request, but did not inform them of payments he made to Falmagne for De Sousa to attend KU.

However, Self called former Adidas executive Jim Gatto to thank him when De Sousa committed to the university, Gassnola testified Monday, relating what Gatto had told him, according to Zagoria.

It wasn’t clear from the testimony why Self thought he ought to thank the shoe company as part of the De Sousa recruitment process.

Last week, Gassnola said he has a “very good” relationship with Self, noting he and his fiancee had dinner with Self and his wife before Self’s induction into the Naismith Memorial Basketball Hall of Fame, according to a Kansas City Star report.

Additionally, Gassnola testified again Monday that he did not pay the $20,000 he intended to give to Falmagne, according to Zagoria. Gassnola previously said he meant to pay $20,000 to Falmagne to get De Sousa out of the $60,000 deal with a Maryland booster, but he never made the payment because the FBI made its investigation public.

Gassnola also reiterated that the coaches did not know about the $90,000 of payments to the mother of former KU player Billy Preston, according to Zagoria.

During the trial, Gatto, business manager Christian Dawkins and former amateur coach Merl Code have pleaded not guilty to defrauding various colleges, including KU, by concealing the use of under-the-table payments of up to $100,000 from Adidas in exchange for recruits committing to programs that were seen as a path to big NBA paydays.

Gassnola, who pleaded guilty to wire fraud charges in March, has testified that the universities are the victims in the case.

The lawyers for the three men facing charges haven’t disputed that payments were arranged in violation of NCAA rules, but they argue the schools never suffered any harm.

But presiding judge Lewis A. Kaplan will not allow the defense to criticize the college sports organization in the trial, according to a CBS Sports report.

“Ladies and gentlemen, we are here today because the government alleges that Jim Gatto committed two federal offenses when Adidas took a tiny portion of the money that it brought in and shared it with the families of the players on the court,” Kaplan said, according to the report. “Now, the purpose of this trial is not to determine whether the NCAA amateurism rules are good or bad. It has nothing to do with it.”

Kaplan said the defense — highlighting the multimillion dollar contracts coaches earn while players receive relatively little as student-athletes — is trying to win the sympathy of the jury, according to the report.

“It was my view, and it remains my view, that the introduction by counsel for Mr. Gatto of the issue of the wisdom and impact of those rules on college players and others doesn’t belong in this courtroom,” Kaplan said, according to the report. “It belongs in the NCAA or the halls of Congress or in the boardrooms of universities. It has no proper bearing on this case. It doesn’t matter if they were children of Bill Gates or of welfare mothers. That’s not the issue.”

Kaplan said the argument must stick to whether the three men violated federal law, according to the report.

“The reason for that is because the government and these defendants are entitled to a verdict that is not swayed by extraneous considerations about the NCAA, the wisdom of its rules,” he said. “The question is whether federal statutes were violated.”