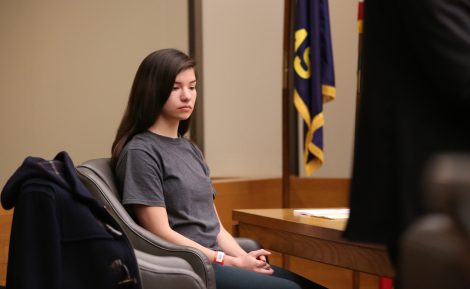 Sarah Gonzales-McLinn listens as her attorney, Jonathan Sternberg, rebuts the state's argument against four of the five points in his motion to vacate Gonzales-McLinn's "hard 50" sentence on Monday, Dec. 16, 2019, in Douglas County District Court.

A judge will hear evidence to determine whether a woman convicted in a Lawrence murder was not properly advised of a plea deal that would have cut her sentence by half.

Rather, her new attorney says that her counsel before and during her trial repeatedly told her, “We’re going to win, young lady.”

Sarah Gonzales-McLinn, now 25, returned to Douglas County District Court Monday for the first of two days of hearings in which she is seeking to vacate her “hard 50” sentence.

A jury convicted Gonzales-McLinn of killing 52-year-old Harold “Hal” Sasko on Jan. 17, 2014, when she was 19. Investigators said she drugged Sasko with sleeping pills, bound his hands and feet while he was asleep, then cut his throat, nearly decapitating him.

On Sept. 4, 2015, now-retired Judge Paula Martin sentenced Gonzales-McLinn to life in prison with no possibility of parole for 50 years. The Kansas Supreme Court upheld her conviction in January 2018.

Gonzales-McLinn’s new attorney, Jonathan Sternberg, of Kansas City, Mo., has filed a motion to vacate the long sentence. He lists five main reasons for that. On the additional four, Sternberg said that Judge Amy Hanley planned to spend the rest of Monday afternoon reading up on cases that he and Assistant Douglas County District Attorney Kate Duncan Butler had cited in their arguments.

Hanley will, however, hear evidence regarding whether Gonzales-McLinn was not properly advised of a plea agreement the DA’s office had offered.

Had Gonzales-McLinn pleaded guilty, the state would not have sought the “hard 50” sentence and she instead would have faced just 25 years before she became eligible for parole.

Sternberg argued in court Monday that Gonzales-McLinn’s counsel during her trial, Carl Cornwell, did not adequately explain to Gonzales-McLinn what the “hard 50” sentence meant or how it worked. 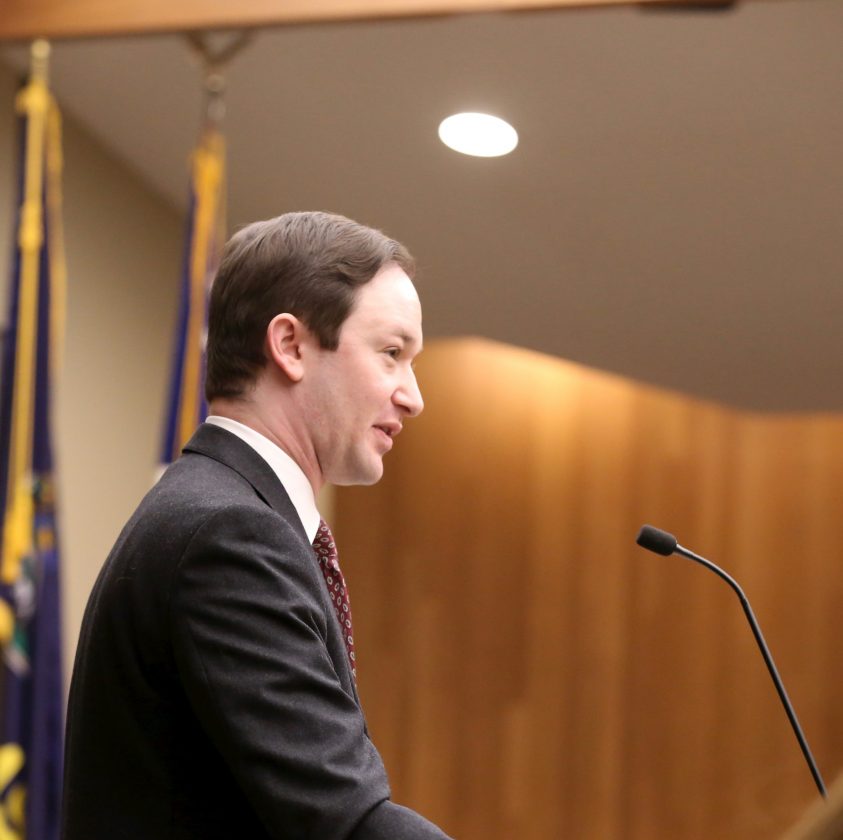 Jonathan Sternberg, attorney for Sarah Gonzales-McLinn, speaks during a preliminary hearing in a motion to vacate his client’s ‘hard 50’ sentence on Dec. 16, 2019, in Douglas County District Court.

Her family didn’t find out about the plea offer until after the trial, Sternberg wrote in his motion prior to the hearing. When Gonzales-McLinn’s father, Robert McLinn, asked Cornwell why his daughter did not take the plea, Cornwell said that “Sarah wanted her story told.”

That wasn’t true, Sternberg said; Cornwell actually told District Attorney Charles Branson that Gonzales-McLinn “would have to get a new attorney if she wanted to take this plea.”

It would have resulted in the sentence that Cornwell ultimately asked Martin to impose, arguing that Gonzales-McLinn was suffering from mental illness at the time of the crime and that 50 years would take away all hope.

Butler said that the state would agree that it was important to have an evidentiary hearing to understand what Gonzales-McLinn understood about the plea. That concern will be heard. Sternberg expects Cornwell, Branson, Gonzales-McLinn and McLinn to testify.

Gonzales-McLinn appeared in court Monday in the gray T-shirt typical of inmates, with her long brown hair down her back. About 15 to 20 people sat behind her in the courtroom. 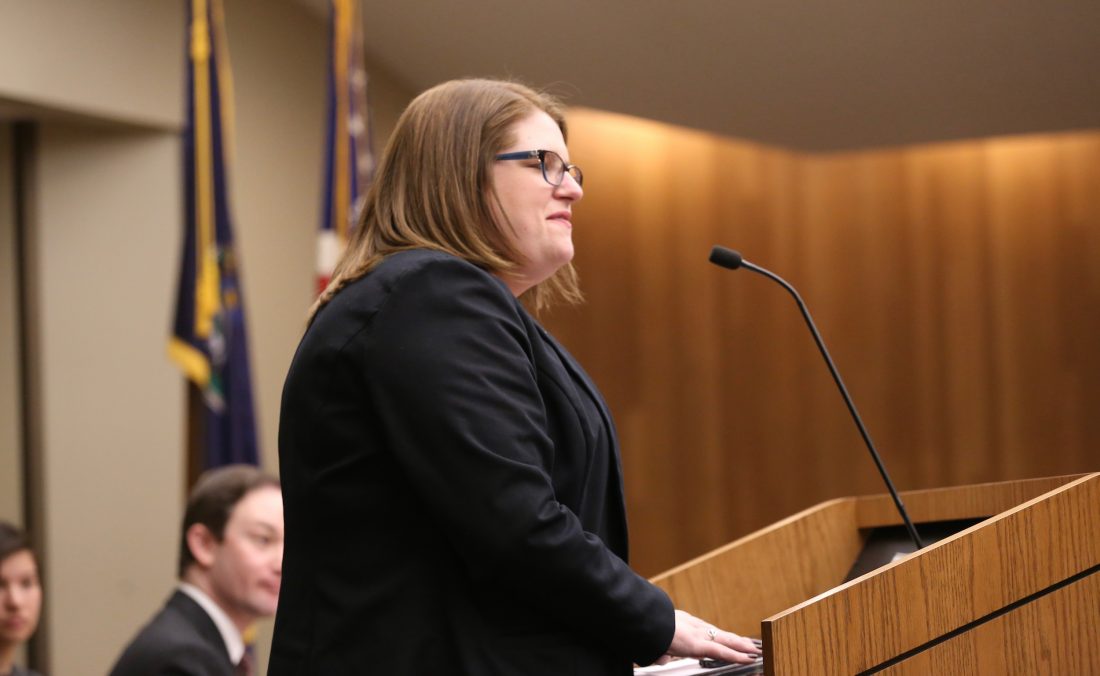 Assistant Douglas County District Attorney Kate Duncan Butler speaks during a hearing on a motion to vacate the ‘hard 50’ sentence of Sarah Gonzales-McLinn on Monday, Dec. 16, 2019. Seated in the background are Gonzales-McLinn and her attorney, Jonathan Sternberg.

Butler argued against the judge hearing evidence on the other four issues Sternberg pushed in his motion and in court:

• Cornwell failed to object to a report from Larned State Hospital being considered in sentencing.

During Gonzales-McLinn’s trial, Cornwell told jurors that his client suffered from dissociative identity disorder, or DID. Trauma — including sexual abuse as a child and a rape at age 15 — had contributed to Gonzales-McLinn’s mental illness, and she had multiple personalities.

Cornwell said that when she met Sasko at age 17, Gonzales-McLinn thought she finally “met someone who (was) going to help her.” Instead, Sternberg said Monday, Sasko held her in a state of sexual and financial servitude. There was also more to their backstory that Sternberg wrote about in his motion, going back to when Gonzales-McLinn was 14 and first started working at the Cici’s Pizza that Sasko ran in Topeka.

Sternberg said in court that “Vanessa” was contemplating suicide as the only way out of the relationship with Sasko. “Alyssa” saw that the only way to protect herself, and the other personalities, was to kill Sasko.

Sternberg argued that two expert witnesses — one for the prosecution and one for the defense — testified that Gonzales-McLinn did struggle with serious mental illness.

Dr. William Logan, an expert for the state, concluded after evaluating Gonzales-Mclinn that he was unsure whether she suffered from DID, but he was open to the possibility. The defense expert, psychologist Marilyn Hutchinson, reported that Gonzales-McLinn did suffer from DID and other mental health issues that rendered her incapable of acting intentionally and with premeditation as prosecutors alleged.

Sternberg said the report from Larned — which was completed by a trainee — said that Gonzales-McLinn did not suffer from DID and that she was lying or faking it. Cornwell should have objected to Martin considering it in sentencing, for legal reasons, but he did not do so, Sternberg said. Taking the report into consideration, Martin found no evidence to support sentencing Gonzales-McLinn to a treatment facility rather than prison.

Butler argued that the report was not the only factor Martin considered in sentencing, and the outcome would likely have been the same with or without it because of the doubts Logan’s report also cast.

• Cornwell failed to instruct the jury on second-degree intentional murder.

Sternberg argued that even considering the state’s “allegedly overwhelming evidence” that Gonzales-McLinn had murdered Sasko with premeditation, a jury still could have found his client guilty of second-degree murder.

If jurors had believed Hutchinson’s testimony that Gonzales-McLinn could not form intent, because intent would require rational thought of which the defendant was not capable at the time of the crime, Sternberg said they could have convicted for second-degree murder rather than the all-or-nothing option they faced: first-degree premeditated murder or acquittal.

Sternberg said Cornwell will testify that it “never occurred to him” to seek to instruct the jury on the lesser included offense. 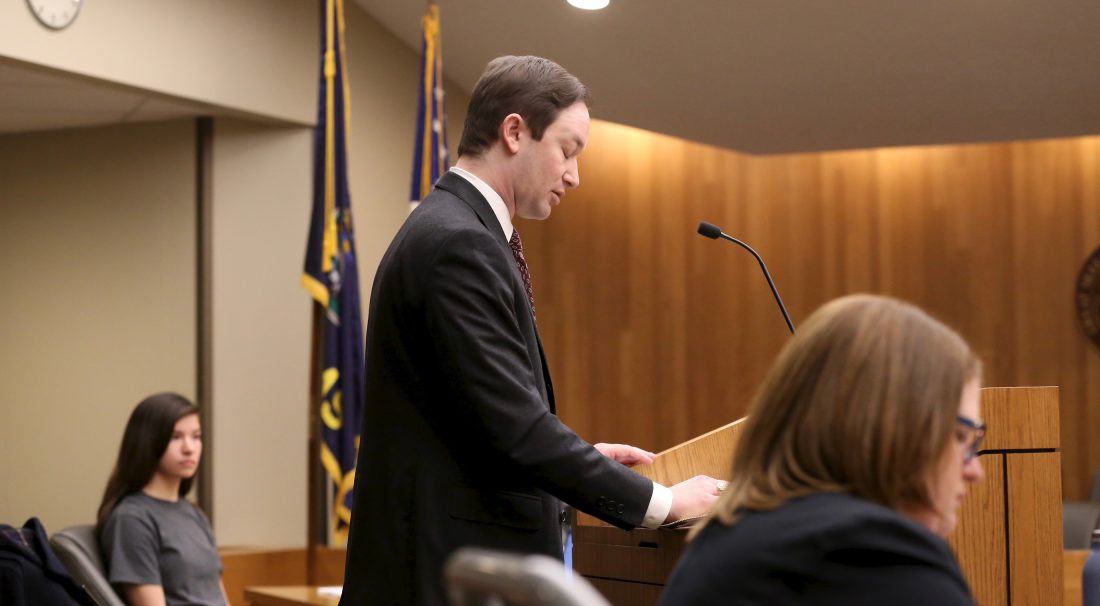 Hanley noted that the court was aware of Cornwell’s high level of experience.

“The idea that considering lessers simply didn’t occur to him, that’s what you proffer?” Hanley asked.

Sternberg said that’s what Cornwell had told him — he was convinced he was simply going to win the case.

Butler argued in a motion prior to Monday’s hearing that Cornwell has tried at least 50 homicides in his career and “he certainly did not … simply forget” to request a lesser included crime in jury instructions.

However, Sternberg noted that the Kansas Supreme Court in its opinion affirming Gonzales-McLinn’s conviction already said that it would have been appropriate to include. He said the question wasn’t whether the jury would have convicted her on the lesser charge but rather that a rational fact-finder could have done so.

Through Cornwell argued one of the first “battered woman syndrome” cases in Kansas, Sternberg said, he did not raise it as a defense in Gonzales-McLinn’s case.

Gonzales-McLinn had moved in with Sasko at age 17, Sternberg wrote in his motion. At first, he acted as a father figure — he was 33 years her senior. But over time, the two would drink and do drugs together; Sasko also began to keep a running tab of expenditures that he said she would owe him one day.

Sasko never liked the way Gonzales-McLinn’s nose looked, so he paid for her to get a nose job as well as gluteal implants, Sternberg wrote. The cost was added to her bill. The surgeon said she was too young for the breast augmentation he also wanted her to get, Sternberg wrote.

Sasko kept pushing Gonzales-McLinn until she finally relented and had sex with him once, immediately regretting it, Sternberg wrote.

Then Sasko would withhold the drugs and alcohol to which he’d gotten Gonzales-McLinn addicted, Sternberg wrote; if she would not have sex with him, she could “just go,” but she would have to pay her bill, which by fall of 2013 was more than $14,000.

She killed to escape her abuser, but Conwell never pursued that defense because he’d said “battered women don’t leave home,” Sternberg said. Therefore, Hutchinson was never asked to explore whether it could be used in Gonzales-McLinn’s case.

Butler argued that because Sasko was asleep at the time of his death, he was not posing an imminent threat to Gonzales-McLinn. She said that in State v. Stewart, the Kansas Supreme Court found in 1988 that the defendant’s abusive husband was asleep when she killed him and therefore no immediate threat existed, so her self-defense argument did not hold up.

However, on rebuttal, Sternberg said the main issue in that case wasn’t that the husband was sleeping — rather, it was that the woman had access to other, nonlethal means of escaping.

• Cornwell did not argue that Kansas’ abolition of the traditional insanity defense violated the Constitution.

As The Associated Press reported in October, the U.S. Supreme Court is in the process of reviewing Kansas’ lack of an insanity defense. Since state laws changed in 1996, Kansas defendants can only claim a “mental disease or defect” as a limited defense.

James K. Kahler was sentenced to death for killing his estranged wife, her grandmother and the couple’s two daughters in 2009. In his case, his attorneys have since argued that the state of Kansas violated Kahler’s rights under the Eight and 14th Amendments to pursue an insanity defense.

However, Sternberg argued Monday that had Cornwell raised the issue, Gonzales-McLinn’s case would be before the U.S. Supreme Court alongside Kahler’s.

Butler argued that if not for changes in the makeup of the Supreme Court, Kahler’s case would not have made it that far. She said we know things now that we didn’t in 2015 when Gonzales-McLinn’s case was tried. Kahler’s attorney is trying “a fun Hail Mary pass” that will never succeed, Butler said.

She said that to think trial lawyers need to be able to “read the tea leaves,” and raise every issue because it could grow legs in the future would render dozens of attorneys ineffective.

Sternberg said Cornwell did have the responsibility to be aware of the Kahler case, a “fairly notorious” capital murder, when the same issue is raised in the case he was handling.

Sternberg was ready to go — he told the judge there was time to start an evidentiary hearing on all the issues Monday afternoon.

However, Hanley adjourned for the morning.

Sternberg said Hanley would consider the other four legal issues, read over the numerous cases that he and Butler cited during their arguments, and rule on whether she will hear evidence on those matters when the hearing resumes at 9 a.m. Tuesday.

• Dec. 16, 2019 — Judge will hear evidence in Sarah Gonzales-McLinn motion that seeks to vacate her ‘hard 50’ sentence for murder conviction