Psychologist: McLinn has multiple personalities, compares herself to Jeffrey Dahmer 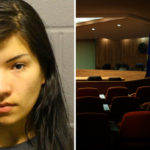 One of Sarah Gonzales McLinn’s multiple personalities killed Harold “Hal” Sasko, of Lawrence, “as an act of love” toward another of her personalities, psychologist Marilyn Hutchinson said in the third day of testimony in McLinn’s first-degree murder trial.

McLinn, 20, is charged with intentional, premeditated murder in the Jan. 14, 2014, death of Sasko, 52, of Lawrence. McLinn lived with Sasko at the time of his death and had previously worked for him at Sasko’s CiCi’s Pizza restaurant. On Wednesday, jurors watched McLinn’s videotaped post-arrest interview, where she detailed drugging Sasko with five sleeping pills, zip-tying his wrists and ankles, feeling for his artery and plunging the knife into his neck.

Hutchinson, hired by the defense to counsel McLinn a total of 17 hours from February 2014 to July 2014, said she diagnosed McLinn with dissociative identity disorder, or multiple personalities. Hutchinson said she refers to McLinn as “the system of Sarah.” Within that “system” are “Vanessa,” “Alyssa,” “Mila” and “No-name,” Hutchinson explained.

Hutchinson said she could summon each of McLinn’s personalities or “sub-identities” through a countdown procedure that she demonstrated for the court. First, she asked if “Alyssa” would be willing to come out and talk, counted from one to 10, then asked if “Alyssa” was there. Jurors looked at McLinn during the countdown, but McLinn remained unmoved.

Hutchinson said she based the diagnosis on her time with McLinn, a series of psychological tests, an interview with McLinn’s sister, mother and father and McLinn’s medical records.

Branson questioned whether McLinn was malingering, or falsifying symptoms of a mental disorder for secondary gain. McLinn has been reading psychology books in her jail cell since she has been incarcerated, Branson said, and one of McLinn’s psychological tests was inconclusive due to “over-reporting” symptoms. A second test said results should be read with caution because her answers “magnified illness,” showing an “inclination to complain” and “extreme vulnerability.”

Hutchinson said McLinn was reading the psychology books to “figure herself out” and that it was her job to interpret the tests’ results.

Hutchinson testified that the person known as “Sarah” died at the age of 16 after a brutal rape in which a man threw her into a glass table and burned her arm with a cigarette. She said McLinn suffered neglect as a child, with an absent father and a mother with whom she never bonded.

Other instances of abuse mentally scarred McLinn from a young age, Hutchinson said, causing her to mistrust adults and seek a father figure. Hutchinson said that McLinn told her that when she was young, a neighbor would shoot and mutilate squirrels and rabbits, hold them to her face, then tell her that he would do the same to her if she ever told about his molestation of her.

As Hutchinson told jurors the extent of McLinn’s alleged childhood abuse, McLinn began sobbing harder than she had at any point during this week’s trial. She plugged her ears with her thumbs to block out the details and kept tissues within arms reach.

But when she moved in, Sasko began giving the then-17-year-old marijuana and alcohol and paid for her nose job, Hutchinson said. Sasko then began pressuring McLinn to have sex with him, Hutchinson said, “insinuating that unless she did that, she would have to move out.”

“He had regular discourse with her that no man would find her attractive because her breasts were not big enough and her butt was not big enough,” Hutchinson said.

“She convinced him she was too young to have breast implants because she was under 25.”

Hutchinson said this began to degrade McLinn’s self-esteem, but she agreed to have a buttocks enhancement in April 2013. After recovering from the surgery, McLinn fell into a deep depression, Hutchinson said. McLinn began taking Zoloft, which mellowed her sadness but turned it into rage, Hutchinson explained.

A few days before Sasko’s death, Hutchinson said, McLinn decided to kill Sasko. Once she’d made the decision, Hutchinson said McLinn “stopped seeing red and had an incredible sense of calm.”

Hutchinson said that the kinder “Vanessa” had been controlling McLinn until that point. But when it came to the murder, “Alyssa” took over.

Hutchinson said she asked “Alyssa” why she killed Sasko, and “Alyssa” said it was because “Vanessa” was going to kill herself.

“Alyssa didn’t want that to happen. She perceived the greatest act of love she could do would be to protect the rest of the ‘system.'”

“Alyssa” used a hunting knife instead of a gun to kill Sasko, Hutchinson said, because “a gun would be weak and she needed to be strong.”

“She had such hopes for Sasko and the disappointment was so intense.”

Hutchinson said those who are abused think the world has three kinds of people: victims, abusers and rescuers.

“Alyssa took on the role of rescuer, but in doing that she became the persecutor of great violence.”

When Branson asked whether “Alyssa” had planned and had the foresight and intent to kill Sasko, Hutchinson said that she had “never doubted that.” Hutchinson also said that she thought McLinn as a whole could not form intent “because she didn’t have all of the parts of her that would go into making a rational decision.”

McLinn’s attorney Carl Cornwell is arguing the “not guilty by mental disease or defect” defense and said that jurors should find McLinn not guilty because she was not in control of herself when she killed Sasko.

Both the state and defense rested their cases Thursday. Branson will call one rebuttal witness Friday morning, then the attorneys will make closing arguments and the case will be submitted to the jury.

McLinn remains in the Douglas County Jail on a $1 million bond.

Reports on testimony from previous days:

Follow testimony via the tweets of Journal-World reporter Caitlin Doornbos, who is covering the trial from the courthouse.

Warning: some testimony may be graphic.