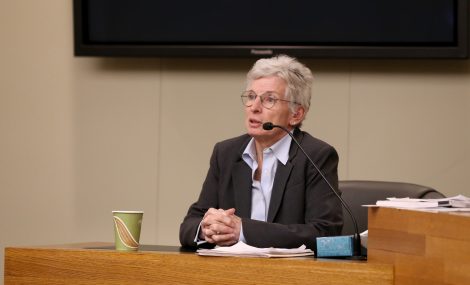 Psychologist Marilyn Hutchinson testifies during a hearing Tuesday, Dec. 17, 2019, on a motion to vacate the "hard 50" sentence of Sarah Gonzales-McLinn.

Although a psychologist had written the words in her report on a Lawrence murder defendant, attorney Carl Cornwell said a “battered woman” defense did not occur to him.

Sarah Gonzales-McLinn, now 25, is serving a sentence of 50 years to life for the 2014 murder of Harold “Hal” Sasko. Her new attorney, Jonathan Sternberg, has argued in hearings this week that her sentence should be vacated. Judge Amy Hanley ruled Tuesday morning that she would hear evidence on two of five arguments that Sternberg had raised.

Marilyn Hutchinson, a psychologist Cornwell had hired as an expert to evaluate Gonzales-McLinn’s mental health, testified about the characteristics she believed the defendant and the victim both exhibited that were consistent with “battered woman syndrome.”

Gonzales-McLinn also testified, crying at times, about the relationship with Sasko.

It’s not an actual diagnosis, but the American Psychological Association has addressed battered woman syndrome in amicus briefs to the U.S. Supreme Court, Hutchinson said. The defense allows some “escalation of retaliation” because the defendants, usually women, generally can’t match the strength of their abusers, usually men, she said: “She can’t slug back with equal force and cause equal damage.”

Hutchinson explained that the name came from an examination of similar cases across the nation. Many of the defendants suffered from post-traumatic stress disorder, depression and learned helplessness, she said. They’re desperate, and most don’t have the ability to get free or leave.

Gonzales-McLinn was depressed and hopeless, she had low self-esteem and she felt guilty for getting herself into her situation with Sasko, as is common in these types of cases, Hutchinson said.

Though she acknowledged on cross-examination that her only information about Sasko came from Gonzales-McLinn and police reports in the case, Hutchinson said Sasko also exhibited characteristics of abusers. He would put Gonzales-McLinn down and say no one would ever want her but him, he was self-centered, he abused drugs and alcohol and he demanded sex, raping Gonzales-McLinn when she tried to say no, Hutchinson claimed.

Sasko’s abusive behaviors would escalate, then plateau, then escalate again, Hutchinson said, in a cycle typical of these cases. Often the abusers will then do something nice, something to mitigate what had occurred.

“His threats and his harm to her would continue if she didn’t do something to stop it,” Hutchinson said.

Hutchinson said those factors may have combined with a physiological change to Gonzales-McLinn: she had recently switched to a different depression medication that gave her energy. When high energy combines with high depression, “that’s when things happen,” Hutchinson said.

“I believe that in her mind, this was the most reasonable action to take,” Hutchinson said. “She had to kill him in order to be free and to save her own life.”

In her May 2014 report from her evaluation of Gonzales-McLinn, Hutchinson wrote: “Like a battered woman, she was demeaned, controlled, and over time she felt worse and worse.”

If she was called to testify in this case again, Hutchinson said, she would emphasize integrating Gonzales-McLinn’s mental illness with self-defense.

When Cornwell took the stand, he said a “battered woman” defense never occurred to him.

He had lodged a “mental disease or defect” defense based on Gonzales-McLinn’s dissociative identity disorder, or DID. He told Sternberg that he thought Gonzales-McLinn’s multiple personalities explained the killing and showed that she was not rational enough to have premeditated the act. A defense based on self-defense would not have been compatible with that, Cornwell said.

With Cornwell’s strategy, the defense focused on Gonzales-McLinn herself. Had he argued self-defense, the emphasis could have been more on Sasko’s alleged actions.

However, Cornwell, said he didn’t think the battered woman syndrome defense would have fit the case because “battered women don’t leave” the home; Gonzales-McLinn had. He said Tuesday that he knows that occasionally they do leave.

Gonzales-McLinn said it took a long time of talking with Hutchinson about her life and some of her past experiences before she “could even physically speak it out loud.”

She didn’t speak of the sexual abuse that occurred when she was a very young child, which Cornwell had discussed at her trial. She did talk about a night when she was “somewhere she shouldn’t have been,” and a friend who was very intoxicated sexually assaulted her and burned her arm with a cigarette. 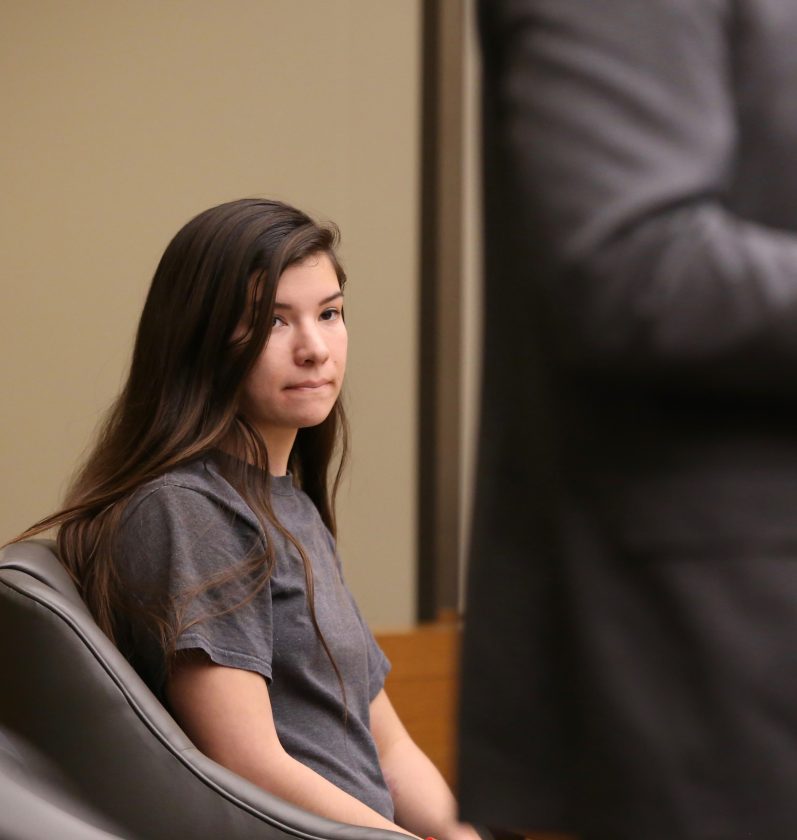 Sarah Gonzales-McLinn listens as her attorney questions a witness during a hearing on her “hard 50” sentence, Tuesday, Dec. 17, 2019.

She was 16 and working at Cici’s Pizza in Topeka at that time. Sasko, who owned the restaurant, noticed the burns on her arm. He asked if she was being abused; she said yes, though she did not go into detail. But from that point he “took me under his wing a little,” she said.

Sasko, who was 33 years her senior, became like a mentor or father figure to her for a while, she said. He’d come pick her up at her high school and take her to Taco Bell for lunch sometimes. She and her family were in a rough patch because her parents had an “ugly” divorce, her grandfather had recently died and “everybody was just a mess and couldn’t take care of themselves,” she said.

So she graduated from high school a semester early, and at 17 she took Sasko up on his offer to live with him. But before long, he was saying he had romantic feelings for her and asked her if she could ever feel the same way about him, she said.

Her answer was consistently no, but eventually when they were drunk one night, a sexual encounter “kind of just happened,” she said. She said that afterward she felt disgusting and told him she didn’t want it to happen again, but in the future when she tried to tell him “no,” he’d act like he didn’t hear her and sometimes hold her arms.

She had agreed that she would pay Sasko rent, and she said he kept most of her paychecks from her part-time jobs at Office Depot, then at Bed Bath & Beyond. She said Sasko kept a running bill on his laptop, and he’d print off invoices and leave them around the house or slide them under her bedroom door when he was mad.

Gonzales-McLinn started to cry multiple times as she testified Tuesday about the embarrassment she experienced in the relationship. She said her shame controlled her whole life for a long time.

She’d never liked the way her nose looked, she said, so Sasko helped her get plastic surgery. But she said he opened a credit card in her name so she could build credit, and he was making payments on it. The $6,000 surgery was added to her bill.

She spoke very slowly about the next surgery she had. She’d always been very insecure, she said, and Sasko would often talk down to her and make fun of her and the way her body looked. Sasko wanted her to have a breast augmentation, but the surgeon said she was too young at 18, Gonzales-McLinn said.

Instead, she testified that Sasko said she “needed to do something else. She got gluteal implants, which she said are an “augmentation for your butt,” pausing between each word.

“I was so embarrassed and I hated myself because it had gotten that far,” she said, referring to the relationship with Sasko. She and her sister used to talk about and make fun of “girls who did that, and that was something we’d never do.”

That $10,000 surgery was also added to her bill, she said. Afterward, she quit her job because she was too embarrassed and ashamed to go back, and she just stayed on the couch, drunk and high all day. The surgeries left her in pain, too, she said. When she ran out of her prescribed painkillers, Sasko would get more from a friend.

“He owned me at that point, and that surgery just solidified it for him,” she said.

By that point, Gonzales-McLinn was isolated from her family, and she didn’t want anybody to know what was going on. She said she’d tell Sasko she was going to leave, but he told her that if she did, she’d still owe him — at this point, upwards of $16,000 — and he’d sue her. She’d “never be able to have a house or anything.”

She said she doesn’t remember the Jan. 17, 2014, killing — the fall leading up to that date, and even the time after her arrest, “felt like dreams.” There were a lot of times she couldn’t recall.

She said she knows now that she did kill Sasko. The evidence showed she had drugged him with sleeping pills, bound his hands and feet, and cut his throat almost to the point of decapitation. The first thing she remembers was the blood on her hands and going to wash it off in the shower.

In an interview with police after her arrest, she described writing on the wall in Sasko’s blood. When asked, in the video, why she killed Sasko, Gonzales-McLinn told the investigators that it was something she’d been thinking about for some time. She said she decided to kill him about five days before the homicide. She confessed to plunging a knife into Sasko’s neck “to see what it felt like to kill someone.”

She fled to Florida, via Texas, in Sasko’s car after the slaying, collecting tattoos along the way.

She remembered being in the car and driving, she said Tuesday. She was so exhausted that she stopped and slept in the car, and she woke up shaking from the cold. So she drove south, where it was warm, she said.

She said Cornwell never mentioned a battered woman defense to her. If he had, she would’ve told him to do it, she said.

Assistant Douglas County District Attorney Kate Duncan Butler’s cross-examination of Gonzales-McLinn had just started before the judge recessed for the day at 5 p.m. The hearing will continue Jan. 13.

• Dec. 16, 2019 — Judge will hear evidence in Sarah Gonzales-McLinn motion that seeks to vacate her ‘hard 50’ sentence for murder conviction