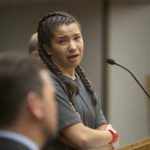 Sarah Gonzales McLinn gives a statement Friday, Sept. 4, 2015, in Douglas County District Court before her sentencing for the first-degree murder of Harold “Hal” Sasko in January 2014.

A young woman who murdered an older man she lived with in Lawrence is trying another route to appeal her conviction, or at least her “Hard 50” life prison sentence.

Among other arguments, 24-year-old Sarah B. Gonzales-McLinn contends that her trial attorney should have employed a battered women’s defense strategy instead of emphasizing her mental illness, her new lawyer said.

“This wasn’t simply a question of her having dissociative identity disorder or other mental disorders … she was held in sexual and financial slavery by Mr. (Harold) Sasko for essentially over a year,” said Jonathan Sternberg, the Kansas City, Mo.,-based attorney who filed the civil matter on Gonzales-McLinn’s behalf Tuesday in Douglas County District Court. “A reasonable person essentially would have snapped and seen this as the only way out.”

Gonzales-McLinn’s new civil case asks for her sentence to be reduced or her conviction to be undone and retried in court, Sternberg said. Appeals in her criminal case have been exhausted and did not succeed.

In 2014, Gonzales-McLinn drugged and sliced the throat of pizza franchise owner Sasko, 52. At the time, McLinn was 19, had gotten a job at Sasko’s Lawrence Cici’s Pizza restaurant and then moved in with Sasko at his house.

Gonzales-McLinn then fled the state in Sasko’s car, leaving the word “FREEDOM” smeared in Sasko’s blood on a wall where she left his body, zip-tied at the wrists and ankles.

In September 2015, Gonzales-McLinn was sentenced to a “Hard 50,” or life in prison with no chance at parole before 50 years. She appealed her case, but in January 2018, the Kansas Supreme Court upheld her first-degree murder conviction and Hard 50 sentence.

Sternberg said Gonzales-McLinn’s petition for post-conviction relief is asking for a new trial or, in the alternative, to have her sentence downgraded from a Hard 50 to a Hard 25.

In her new case, Gonzales-McLinn argues that her trial lawyer — seasoned Johnson County-based criminal defense attorney Carl Cornwell — gave her deficient assistance in a number of ways that could have changed the outcome of her case.

Sternberg said one of Cornwell’s errors was his failure to employ the battered women’s defense. He said that with that argument, Gonzales-McLinn’s actions could have been viewed by jurors as a “reasonable” form of self-defense.

Gonzales-McLinn did not testify at her own trial.

In her civil petition, she alleges that Sasko — after learning of her troubled personal life — invited her to move in with him, then “groomed” her and “plied her” with drugs, including cocaine and ecstasy. She said in the petition that he pressured her into sex when she was intoxicated and then demanded it repeatedly by threatening to cut her off, from living in his house and from the drugs and other expenses he was covering for her.

“He told her he would be her ‘father figure’ – the father she then felt she never had – and would take care of her,” the petition says.

“…Finally, and partially due to preexisting mental disorders stemming from prior abuse, she reasonably believed she had no choice, seized an opportunity, and killed Mr. Sasko to escape.”

The petition says that Gonzales-McLinn does not remember planning the killing, however.

“Ms. Gonzales-McLinn knows she killed Mr. Sasko,” the petition says. “She does not presently have much memory of it, if at all. She does not remember writing ‘freedom’ in his blood on the wall. Her memory feels like she was watching herself do it as if from above, like a dream. She remembers showering to remove the blood, and then abruptly leaving and driving to Florida.”

At Gonzales-McLinn’s trial and sentencing, covered by the Journal-World, Cornwell used the “not guilty by reason of mental disease or defect” defense because a psychologist hired by the defense had diagnosed her with dissociative identity disorder, or multiple personalities. Cornwell insisted that Gonzales-McLinn herself did not kill Sasko, but rather one of her compartmentalized personalities, “Alyssa,” did.

At Gonzales-McLinn’s sentencing, the Journal-World reported, Cornwell said his client suffered sexual abuse as a child and a brutal rape at 15 that contributed to her mental illness. He said that when she met Sasko at age 17, she thought she finally “met someone who (was) going to help her.” Testimony at trial indicated that there may have been a sexual component to their relationship, and that Sasko had paid for two plastic surgeries — a nose job and buttocks implants — while she lived with him.

Other complaints about Cornwell’s performance include that when the Douglas County District Attorney’s Office gave Gonzales-McLinn a plea offer that would have resulted in a Hard 25 sentence, Cornwell did not adequately consult her about it, according to the petition.

The office of DA Charles Branson has yet to file any replies to the new lawsuit.

Currently, Gonzales-McLinn is incarcerated at the Kansas Department of Corrections facility in Topeka. KDOC lists her earliest possible release date as Feb. 1, 2064.