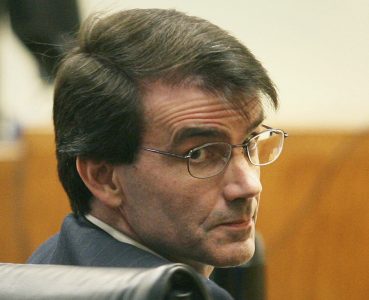 In this Aug. 29, 2011, file photo, James Kraig Kahler, who was convicted of capital murder in the fatal shooting of his estranged wife, their two teenage daughters and his wife's grandmother, looks into the spectators gallery in Osage County District Court in Lyndon, Kan., during a break in his sentencing hearing. The U.S. Supreme Court is preparing to consider whether Kansas is improperly denying criminal defendants the right to an insanity defense as it takes up an appeal from Kahler who was sentenced to death for the killings. (Thad Allton/The Topeka Capital-Journal via AP)

TOPEKA — The U.S. Supreme Court is preparing to consider how far states can go toward eliminating the insanity defense in criminal trials as it reviews the case of a Kansas man sentenced to die for killing four relatives.

The high court planned to hear arguments Monday in James Kraig Kahler’s case. He went to the home of his estranged wife’s grandmother about 20 miles south of Topeka the weekend after Thanksgiving 2009 and fatally shot the two women and his two teenage daughters.

Not even Kahler’s attorneys have disputed that he killed them. They’ve argued that he was in the grips of a depression so severe that he experienced an extreme emotional disturbance that disassociated him from reality.

In seeking a not guilty verdict due to his mental state, his defense at his 2011 trial faced what critics see as an impossible legal standard. His attorneys now argue that Kansas violated the U.S. Constitution by denying him the right to pursue an insanity defense.

The nation’s highest court previously has given states broad latitude in how they treat mental illness in criminal trials, allowing five states, including Kansas, to abolish the traditional insanity defense. Kahler’s appeal raises the question of whether doing so denies defendants their guaranteed right to due legal process.

“Maybe they will establish some ground rules,” said Jeffrey Jackson, a law professor at Washburn University in Topeka. “They’ve been vague about what the standard is, and maybe now they’re going to tell us.”

Until 1996, Kansas followed a rule first outlined in 1840s England, requiring defendants pursuing an insanity defense to show that they were so impaired by a mental illness or defect that they couldn’t understand that their conduct was criminal. Now Kansas permits defendants to only cite “mental disease or defect” as a partial defense, and they must prove they didn’t intend to commit the specific crime. Alaska, Idaho, Montana and Utah have similar laws.

Christopher Slobogin, a professor of both law and psychiatry at the Vanderbilt University, said even seriously mentally ill defendants typically intend to the commit their crimes, even if their acts result from delusions.

Kansas Attorney General Derek Schmidt argues that the Supreme Court has previously taken a “laboratories of democracy approach” so that states can try to improve criminal justice.

“Scholars and practitioners have struggled for literally hundreds of years to decide to how to handle evidence of a criminal defendant’s mental condition,” Schmidt said in an interview. “Kansas is merely continuing the long tradition of trying different approaches.”

Kahler’s attorneys contend he snapped under the strain of crumbling personal and professional lives. His estranged wife, Karen, was in a relationship with another woman and was seeking a divorce. He had lost his job as utilities director in Columbia, Mo., and moved back to Kansas weeks earlier to live with his parents.

Karen Kahler and their three children were spending the Thanksgiving 2009 weekend at the home of Karen’s grandmother, Dorothy Wight, in Burlingame. James Kahler shot the women, then found his daughters and killed them. His young son, Sean, fled to a neighboring house and later testified at his father’s trial.

Slobogin, who helped write a handbook for attorneys and mental health professionals on psychological evaluations for courts, said insanity defenses typically arise in less than 1% of felony cases, and when those cases go to trial, the defendant loses three out of four times.

Still, Kansas legislators enacted the tougher standard in response to a push by crime victims, family members and friends.

They argued that defendants who escaped prison could be released from a state mental hospital after a relatively short stay. A report to state lawmakers in 1994 said that in the previous five years, 39 people who had been found not guilty by reason of insanity were confined to a state hospital. The average length of stay was 14 1/2 months.

Supporters also argued that the new method was more straightforward for juries. Schmidt called it “simpler, cleaner and less confusing.”

But Jackson said: “Most standards that eliminate part of the defense are simpler for juries to understand.”