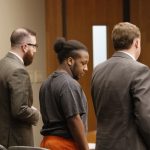 Shawn K. Smith appears in Douglas County District Court on Thursday, April 18, 2019, alongside attorneys Joshua Seiden, left, and Nicholas David. Smith is charged with murder in a 2017 homicide at the North Lawrence Motel 6.

It will be nearly six more months before a murder defendant from the 2017 homicide at Motel 6 in Lawrence faces a jury for his second trial.

The case involved a lot of bullets — three men were shot a total of 17 times, and stray bullets traveled as far as a neighboring business, evidence at the first trial showed. The defense team said it needed time to consult a ballistics expert, among other things.

When Shawn K. Smith, 20, of Kansas City, Mo., first went on trial alongside two co-defendants last summer, the jury couldn’t agree on a verdict for his charges. Smith’s retrial had been set to begin next week, but on Thursday Douglas County District Court Judge Sally Pokorny agreed — at Smith’s request — to reschedule it for Oct. 7.

Smith hired a lawyer to represent him at his first trial, but afterward Pokorny appointed one for the retrial, Nicholas David. On Thursday the judge appointed a second attorney, Joshua Seiden.

“As the court’s well aware, this is a very complex case,” David said in asking for the delay. “Mr. Smith is facing a potential life sentence if he’s convicted … We believe that this is necessary in order to provide Mr. Smith an effective defense.”

In addition to giving Seiden time to get up to speed, the defense plans to hire an investigator and a ballistics expert to prepare for the retrial, David said.

After a two-week trial in August 2018, co-defendants Tyrone J. Carvin, 20, and Ramone Singleton, 24, both of Kansas City, Kan., were convicted not of first-degree felony murder as charged but of voluntary manslaughter. Carvin, who had multiple previous felony convictions, was later sentenced to more than 23 years in prison; Singleton, whose record was clean, was sentenced to just under 10 years.

However, the same jury couldn’t agree on a verdict for Smith, so the judge declared a mistrial.

Smith, Carvin, Singleton and a fourth man from the Kansas City area met up with five other men to party in the room, with plans to go out later to a strip club and Massachusetts Street.

At the first trial, victims and defendants both testified they were drinking, smoking marijuana, eating pizza and watching football when a barrage of more than two dozen bullets suddenly broke out inside the small room. Each friend group accused the other of trying to rob them first, sparking the shooting.

Cameron Hooks, 23, of Lenexa, was shot five times and died from his injuries. Laroyce Thomas was shot eight times, and Dominck Frye was shot four times, but those two survived.

Smith himself took the stand at the first trial, saying that he came to Lawrence with his co-defendants that night but that he didn’t have or fire a gun. He was wearing “house shoes,” or slide-style sandals, that fell off as he ran from the room in fear, he said.

His attorney described Smith as “just a guy in the back seat” and “a kid looking to meet girls on a Saturday night.”

“He goes along, and he ends up in the wrong place at the wrong time, presumably with the wrong people,” Gary Long said in his closing arguments. 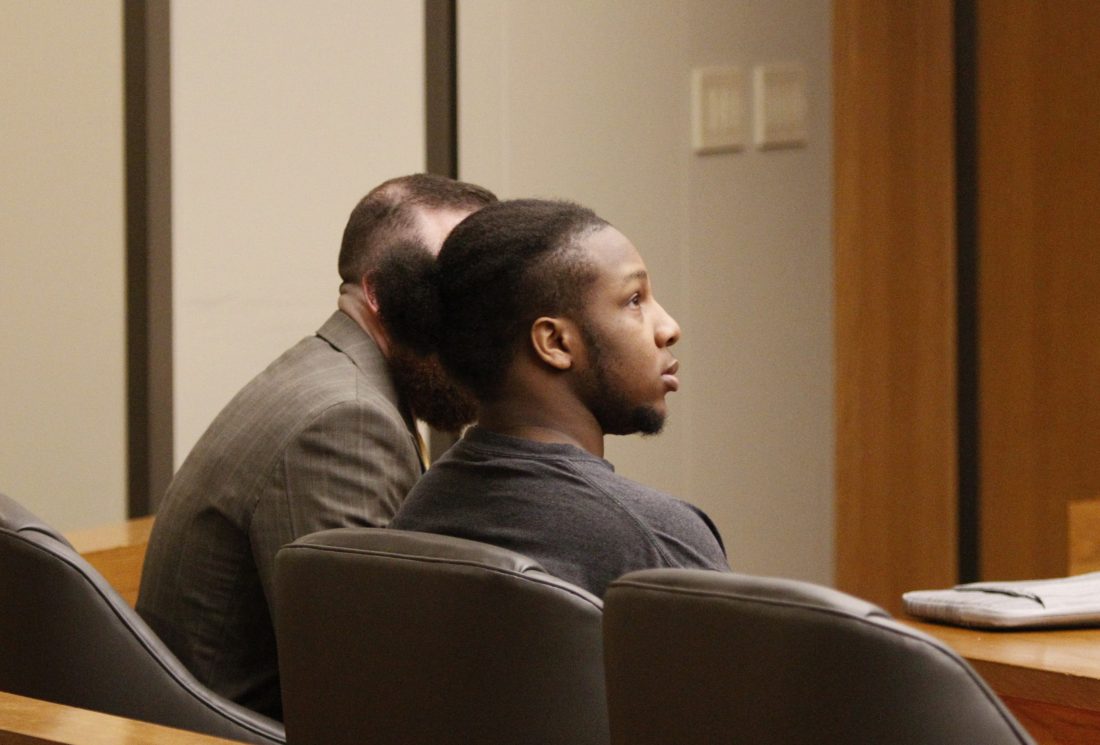 Shawn K. Smith appears in Douglas County District Court on Thursday, April 18, 2019. Smith, charged with murder in a 2017 killing at the North Lawrence Motel 6, is scheduled for a retrial after a hung jury at his first trial.