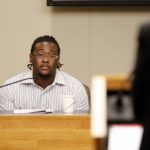 Murder defendant Tyrone J. Carvin, 20, is cross-examined by prosecutor C.J. Rieg while testifying at his own trial on Thursday, Aug. 23, 2018, in Douglas County District Court. Carvin is one of three co-defendants charged with murder and other crimes in connection with a multiple shooting on Sept. 2, 2017, at Motel 6 in North Lawrence.

Two murder defendants took the witness stand at their own trial on Thursday, flipping a key part of the story that’s been presented by alleged victims in the case.

They didn’t rob anyone at Motel 6, they said. The other people tried to rob them.

Tyrone J. Carvin said he did fire a gun, but only after two men he hadn’t met until that night pulled guns on him and his friends and tried to rob them. Co-defendant Shawn K. Smith said he didn’t have a gun but that he heard the first shot come from the direction of the same two men.

Those men, the defendants said, were Cameron Hooks and Laroyce Thomas.

Hooks was shot five times and died. Thomas was shot eight times and survived, but told the judge he refused to testify at this trial to avoid incriminating himself in cases he has pending in another county.

Both the state and the defense have rested their cases, and closing arguments are planned Friday.

A group of nine men had been partying in room 308 — with plans to go to a strip club and then Massachusetts Street — when at least two dozen shots erupted inside.

Mathdaniel Squirrel and fellow Topeka friends Dominck Frye and Tanner Marlow had rented the hotel room for what they described as a guys’ night out in Lawrence. Squirrel invited Thomas, who brought Hooks — who had recently moved to the area and whom others said they’d never met.

Squirrel also invited Carvin, whom he knew from a previous stint in juvenile detention. Carvin brought Smith and Singleton, plus a cousin of his. No one other than the three defendants has been named by authorities as a suspect or publicly charged in the case.

Squirrel testified at the preliminary hearing in November that one of the Kansas City men pointed a gun at him and tried to rob him, and he ran out the door as bullets started flying. Squirrel didn’t testify at the trial because the Douglas County District Attorney’s Office couldn’t find him to serve him a subpoena.

Frye and Marlow testified that the four men from Kansas City were the ones shooting, though they didn’t personally hear words indicating a robbery. At one point Marlow said he did but then backtracked.

He didn’t bring a gun but saw three other guns in the room when he got there: one at Thomas’ waist, one that Hooks repeatedly picked up and set down from a table, and one that Frye had been trying to sell to him. Later, he noticed a gun on the bed next to where he was sitting but said he didn’t know whose it was.

Everyone was hanging out in the room drinking, smoking marijuana and watching football.

“I heard someone get up and say, ‘Run this (expletive),'” Carvin said. “I seen Hooks and Laroyce standing up with the two guns pointed toward our way.”

Carvin said the two were swinging the guns back and forth, and he took off his watch — a Rolex, according to photos shown earlier in court.

Carvin said he heard someone who he thought was either Hooks or Thomas say, “Don’t do it, don’t do it,” then his ears started ringing and he felt a sharp pain in his right shoulder from being shot. Then, he said, he picked up the gun that was lying on the bed, and fired four or five shots behind him as he ran out the door with the gun and his watch still in his hand.

Smith, questioned by his attorney Gary Long, said he was sitting on one of the hotel room beds looking at his phone when he heard a gunshot from his left, where Hooks and Thomas were.

He said he ran for cover in the bathroom, fearful of getting shot in the back if he tried to run out to the hall. He said Singleton ran into the bathroom with him, then they both made a break for the hall.

Smith said he didn’t have or fire a gun in the room.

The four Kansas City friends got back into Singleton’s car outside and headed back toward home.

Carvin said that, on the way, he threw out the window the gun he’d picked up and fired, and that Singleton also threw a gun out the window. Back in Kansas City, a relative took him to the University of Kansas Hospital where he was treated for the gunshot wound to his shoulder.

Singleton, represented by appointed attorney Forrest Lowry, did not take the stand. 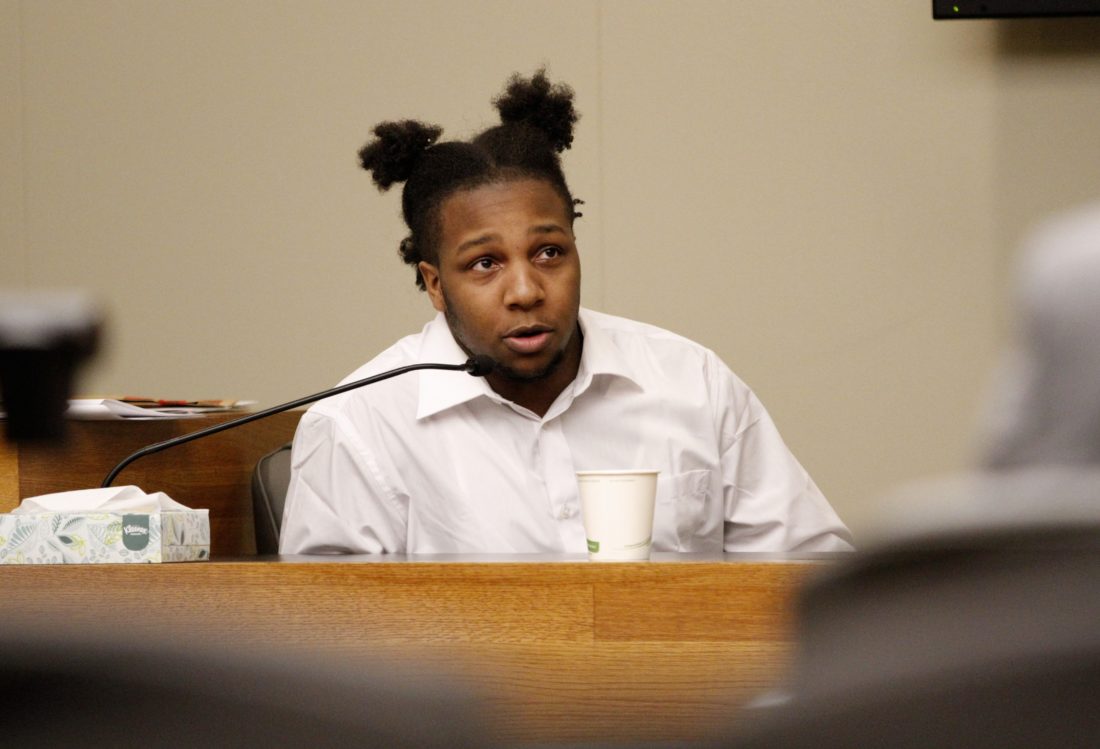 Murder defendant Shawn K. Smith, 19, is cross-examined by prosecutor C.J. Rieg while testifying at his own trial on Thursday, Aug. 23, 2018, in Douglas County District Court. Smith is one of three co-defendants charged with murder and other crimes in connection with a multiple shooting on Sept. 2, 2017, at Motel 6 in North Lawrence. 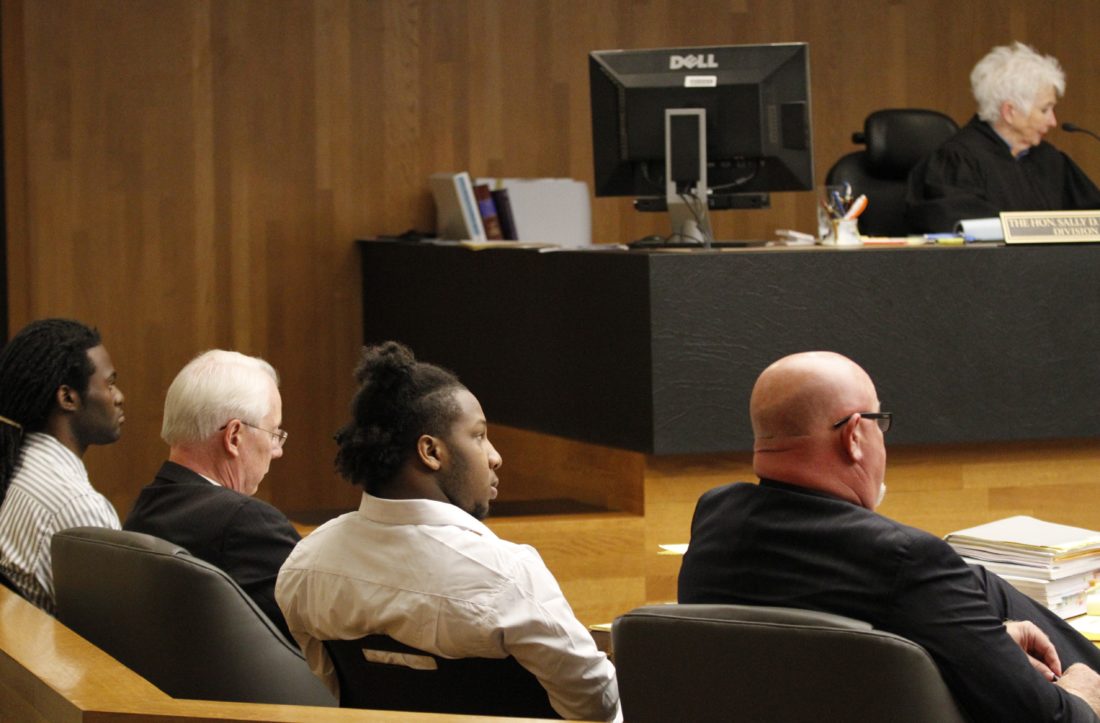 The defense table is pictured as one co-defendant testifies on Thursday, Aug. 23, 2018, before Judge Sally Pokorny in Douglas County District Court. Three men are charged with murder and other crimes in connection with a multiple shooting on Sept. 2, 2017, at Motel 6 in North Lawrence. Pictured, left to right, are Ramone Singleton, his attorney Forrest Lowry, Shawn K. Smith and his attorney Gary Long.