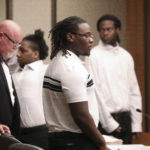 Defendants Tyrone Carvin, front, Shawn Smith, second from left, and Ramone Singleton, second from right, stand to leave the courtroom for a recess on Wednesday, Aug. 15, 2018 in Division II courtroom of the Douglas County Courthouse. The three defendants are charged with the murder of Cameron Hooks and other crimes in connection with a Sept. 2, 2017, shooting at the North Lawrence Motel 6. Also pictured with the defendants are Gary Long, Smith's attorney, left, and Forrest Lowry, Singleton's attorney, right. Carvin's attorney, Michael Clarke is not pictured.

After taking in eight days of evidence in Lawrence’s Motel 6 murder case — from testing on dozens of bullet components to testimony by the accused themselves — jurors began deliberating at 3 p.m. Friday.

They did not reach a verdict Friday and plan to continue deliberations Monday morning.

Prosecutors contend the three defendants tried to rob a group of men they were invited to party with in the hotel and that all of the defendants are guilty of first-degree felony murder because one man died during the attempted armed robbery. The others were either shot or put at risk of being shot.

In her closing arguments, prosecutor C.J. Rieg painted the victims like sitting ducks. Only one victim, Mathdaniel Squirrel, escaped out of the room as the shooting began.

“Dominck Frye, Tanner Marlow, Laroyce Thomas and Cameron Hooks were trapped, in Lawrence, in Motel 6 room 308, and were shot 17 times,” Rieg said in her closing arguments Friday. “There was no escape.”

But defense attorneys said it was the other way around, arguing that any of their clients who shot did so in self-defense because people in the other group pulled guns and tried to rob them first.

“The victims in this case are really the three men who got charged,” defense attorney Forrest Lowry said. “They are lured into this motel room, and then they become victims of attempted robbery.”

The fatal incident happened about 11:30 p.m. Sept. 2, 2017, at Motel 6, 1130 N. Third St. A group of nine men had been partying in room 308 — drinking, smoking marijuana and watching football with plans to go to a strip club and then Massachusetts Street — when at least two dozen shots erupted in the small room.

Though the men are being tried together, the jury will determine whether they’re guilty individually.

In addition to Hooks’ death, the defendants are charged with aggravated battery, attempted robbery and two counts of aggravated assault.

Prosecutors said the intentions of the victims from Topeka, who set up the guys’ night in Lawrence, were transparent. They’d gotten new clothes that afternoon, brought marijuana and alcohol, had some money for pizza and the club, and rented the hotel room in their own names to party. Rieg said evidence showed they were caught off-guard when one of the defendants’ group tried to rob them by saying “Run everything,” and bullets started flying.

Unlike the defendants — who bolted, and ditched their phones and guns afterward — the victims called 911 and waited for police at the scene, Rieg said. Police found the two guns the victims brought, and Kansas Bureau of Investigation testing confirmed that neither was fired in the room that night, but rather that four other guns fired all 24 rounds, Rieg said. Investigation also determined all the bullets were fired from the hallway side of the room, where the victims said the defendants were standing.

But the defendants said that Hooks and Thomas pointed guns at them, and that one or both fired first.

Rieg called that “convenient” because those two men weren’t available to contradict it. Hooks is dead and Thomas, for legal reasons, didn’t testify.

Furthermore, Rieg said, Hooks was shot in the back and side — which isn’t consistent with someone who’s an aggressor in a gunfight.

“He’s trying to protect himself,” Rieg said. “They’re trying to kill him.”

The defendants had no reason to want to kill anyone there, and had never even met Hooks or Thomas, Clarke said. He said they just wanted to go to Lawrence to have fun on a Saturday night.

As for the alleged robbery attempt, Clarke said the defendants didn’t prepare for that either. There was no getaway driver, and they came in the clothes they’d worn to a picnic earlier that day — including one defendant, Smith, in slide-style sandals that fell off when he ran from the room.

Clarke attacked the victims’ credibility, pointing to the inconsistent stories they all gave police and the jury.

“Mr. Carvin and Mr. Smith did a much better job of telling you what happened,” Clarke said.

Long and Lowry emphasized that nothing was taken, and if robbery was the defendants’ plan they could have combed everyone’s pockets after “subduing” the room. Instead, the attorneys said, security video from the hotel shows them “running for their lives.”

Long said being threatened by people with guns is a reason to shoot in self-defense. He said it’s plausible that Carvin and the friends he brought with him were lured to Motel 6 to be robbed by the other men.

“The problem is, they tried to rob the wrong people, apparently,” Long said. 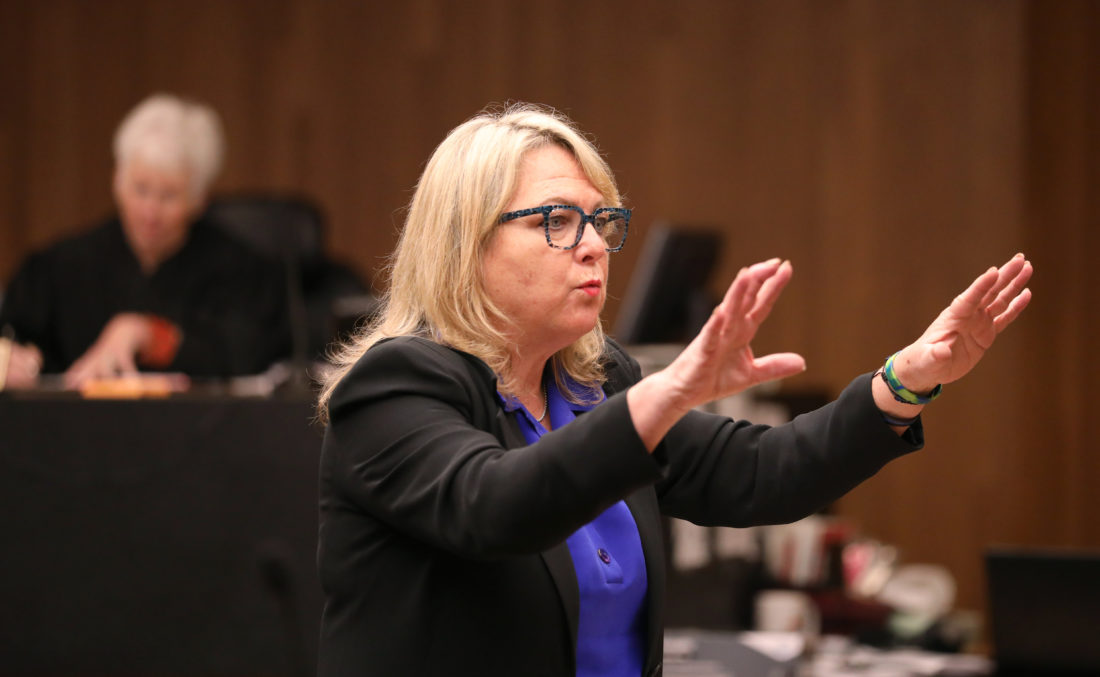 Prosecutor C.J. Rieg paints a picture for members of the jury during her opening arguments on Wednesday, Aug. 15, 2018 in Division II courtroom of the Douglas County Courthouse. 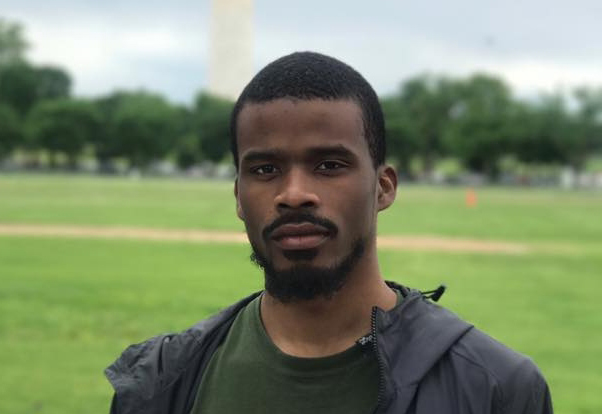