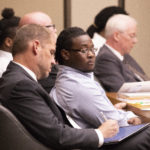 Defendant Tyrone Carvin, looks over at his counsel Michael Clarke's notes as the two listen to testimony on Monday, Aug. 20, 2018, in Douglas County District Court. Carvin and two other defendants are charged with the murder of Cameron Hooks and other crimes in connection with a Sept. 2, 2017, shooting at the North Lawrence Motel 6.

A key witness, missing for months and reportedly feared dead by his father, resurfaced just in time to testify in the Motel 6 murder case on Tuesday.

Tanner Marlow, 21, was arrested Sunday in Lyon County on suspicion of fishing without a license, prosecutor C.J. Rieg said first thing Tuesday morning, with jurors out of the courtroom for attorneys to discuss the unexpected witness issue with Judge Sally Pokorny.

Rieg said she learned early Tuesday morning that Marlow had turned up in Emporia. By about 1:15 p.m. that afternoon he’d been driven into Lawrence and was sitting down in front of the jury in Douglas County District Court.

None of the victims who survived the barrage of gunfire inside the hotel room — including Marlow — gave totally consistent stories about what happened to authorities, from their initial interviews with police through their testimony in court.

Those inconsistencies were the defense teams’ main focus on Tuesday.

After Marlow testified, the state rested its case. Defense witnesses began Tuesday afternoon and are expected to run through Wednesday morning.

Pokorny said attorneys anticipate giving closing arguments and turning the case over to the jury before the end of the day on Wednesday.

A group of nine men from Topeka and the Kansas City area had been partying in room 308 — with plans to go to a strip club and then Massachusetts Street — when gunfire erupted, killing 23-year-old Cameron Hooks, of Lenexa, and injuring two other men. Surviving victims have testified that four men who came together from Kansas City were the shooters.

Despite testimony about the fourth man, no other suspect has been publicly named or charged.

There are five alleged victims in the case:

Marlow was allegedly endangered but not shot. His longtime Topeka friend Dominck Frye was shot four times. His other Topeka friend Mathdaniel Squirrel allegedly had a gun pointed at him in an attempted robbery but bolted out the door, wasn’t hurt and didn’t have anything taken.

Hooks was shot five times and died in the ambulance shortly afterward.

Upon questioning by the defense, Lawrence police detectives and officers testified Tuesday that:

• Thomas, who refused to testify so as not to incriminate himself in a pending out-of-county case, said from his hospital bed that he was engaged in gunfire in the hotel room.

Thomas told police he had a gun and fired it after he heard someone say, “empty it all, or give it all up.” Earlier in the same interview, however, Thomas first said he didn’t shoot.

• Squirrel, whom police found in the Motel 6 parking lot right after the shooting, first gave officers a fake name, denied knowing Carvin, and said he’d seen five or six guns out in the hotel room earlier but didn’t know whose they were.

By the end of a seven-hour interview, however, Squirrel admitted his real name and that he did invite Carvin.

Squirrel explained to police that he was scared to give any details about the incident, saying, “I’m afraid of getting shot for giving out names.”

Squirrel testified at the preliminary hearing in November but isn’t testifying at the trial because the Douglas County District Attorney’s Office’s extensive efforts to find him have been unsuccessful.

‘I was worried for my life’

Marlow, of Topeka, also testified at the preliminary hearing.

But the DA’s office investigator and Lawrence police couldn’t find Marlow to serve him with a subpoena to testify at this month’s trial. His grandparents, whom he previously lived with, said they didn’t know where he was. His father filed a missing person report in April with Topeka police, saying in that report that he feared someone would try to kill his son and that he may already be dead.

After Marlow turned up as a missing person in a national law enforcement database, Lyon County contacted Topeka, Topeka then contacted Douglas County law enforcement, which told the DA’s office and hit the road to pick him up, Rieg said.

Over objections by defense attorneys — because Marlow had previously been declared unavailable and his preliminary hearing transcript read in court last week — Pokorny approved him taking the stand in person.

The judge said “live testimony” is a priority, so attorneys can question witnesses and jurors can see them to help determine their credibility and weigh their statements.

During his hour and a half on the stand, the judge refereed numerous objections by attorneys and unsolicited — at times defensive or combative — statements by Marlow himself. 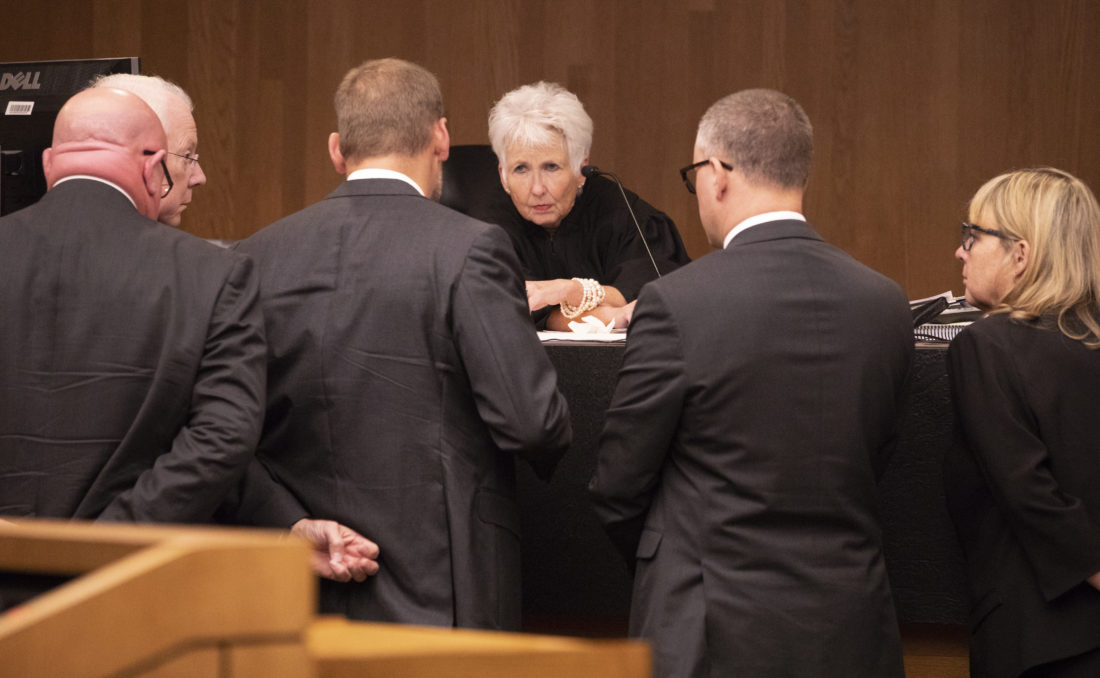 District judge Sally Pokorny listens to members of the defense and prosecution during a meeting at the bench on Monday, Aug. 20, 2018, in Douglas County District Court. On Monday, witnesses provided testimony in the case of three men, who are charged with the murder of Cameron Hooks and other crimes in connection with a Sept. 2, 2017, shooting at the North Lawrence Motel 6.

When prosecutor Mark Simpson asked Marlow whether he knew the DA’s office had been looking for him, Marlow said, “Well, I would presume.”

Simpson asked him why he didn’t show up on his own.

“I was worried for my life, I was getting threats,” Marlow said, though he did not elaborate when or from whom.

Marlow testified that the group was in the hotel room smoking marijuana, drinking and watching a football game and that everything seemed fine.

He said the four men from Kansas City suddenly jumped up and he heard, “Run it, run it!” which made him and his friends think they were being robbed. He said he didn’t know who said it but that it was someone from the defendants’ group.

“My group wasn’t trying to rob nobody,” Marlow said.

Marlow said the gunshots started coming from the front of the room near the door, and he hid behind a bed to escape getting shot.

When the firing was over, the four Kansas City men were gone, Marlow said, along with Squirrel. He was left alone with the three men who had been shot. He said he threw the marijuana out the window because he was afraid of picking up a charge for it and called 911.

Marlow said he didn’t have a gun that night.

He said Thomas had a gun that night but that he didn’t see him fire it.

He said he didn’t recall Frye having a gun, but after being pressed by defense attorneys, he said Frye did have a gun. He explained his reluctance to say that about his friend.

“I’m not going to sit here and snitch on my brother; I’m testifying against the people I should be,” Marlow said. “That’s not the answer that I should have said … I didn’t mean to lie, I’m trying to give all the facts and the straight truth on what happened to my best recollection.”

Marlow said he was caught off guard by learning shortly before the hearing that he’d have to testify that day. He said he was nervous, and admitted to being angry when questioned by one of the defense attorneys.

“I mean who wouldn’t be, in my shoes?” Marlow said. “I’m a little upset with how I’m being questioned like this.” 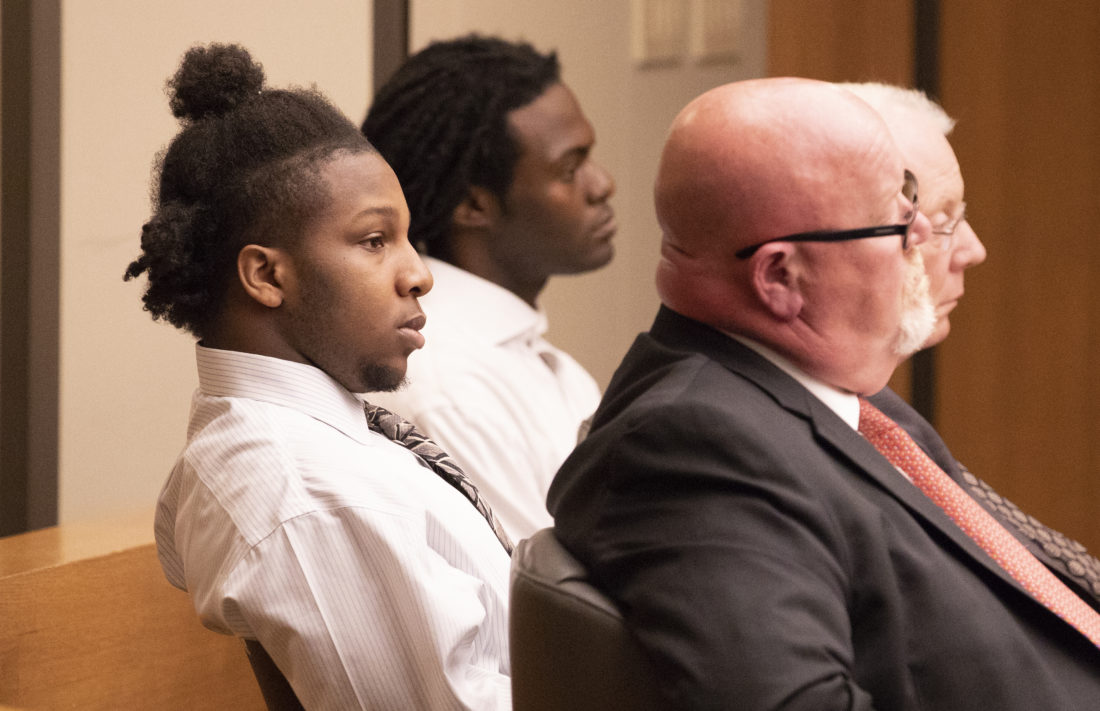 Defendants Shawn Smith, left, and Ramone Singleton listen to testimony on Monday, Aug. 20, 2018, in Douglas County District Court. The three defendants are charged with the murder of Cameron Hooks and other crimes in connection with a Sept. 2, 2017, shooting at the North Lawrence Motel 6. Also pictured are Smith’s attorney, Gary Long, front right, and Singleton’s attorney, Forrest Lowry, partially obscured.