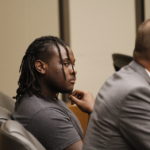 Two friends were both convicted in August of killing Cameron Hooks, shooting another man and threatening a third man with a gun at the North Lawrence Motel 6.

One of those friends will go to prison for more than 23 years, while the other was sentenced to just under 10 years Wednesday in Douglas County District Court.

Tyrone J. Carvin, 20, of Kansas City, Kan., was sentenced to a total of 286 months in prison. Not only does Carvin have prior felony convictions for aggravated robbery, aggravated battery and aggravated assault, he also was on probation for those crimes when he committed the new crimes at Motel 6, Judge Sally Pokorny emphasized when handing down his sentence.

On the other hand, Ramone Singleton, 23, also of Kansas City, Kan., had no criminal history — his attorney called his record “spotless” save for a speeding ticket — and for that reason was sentenced to 117 months in prison.

Both sentences fall within state guidelines, which recommend more time for factors such as criminal history and committing crimes with guns.

Pokorny rejected both defendants’ requests to overlap the sentences for their trios of crimes, instead ordering them to run consecutively, totaling more time behind bars.

“We have three separate victims, and each one of those victims, I believe, is entitled to have his offense sentenced,” Pokorny said.

Prosecutor C.J. Rieg had asked for the maximum sentence, emphasizing the bloodbath that resulted from the multiple shootings.

“These two defendants came armed and dangerous to Lawrence, Kansas,” Rieg said. “They killed Cameron, shot him five times — he had 10 holes in his body.”

On the witness stand, victims and defendants accused each other of instigating a botched robbery attempt that sparked a barrage of more than two dozen bullets inside the small hotel room, about 11:30 p.m. Sept. 2, 2017, at Motel 6, 1130 N. Third St.

Minutes earlier, the nine men hanging out in room 308 had been drinking, smoking marijuana, eating pizza and watching football with plans to go out to a strip club and Massachusetts Street.

The one who ended up dead — Hooks — was new in town and didn’t know anybody except the man he drove in with, whom he’d only just met at work.

Police identified Hooks with help from a tattoo of his mother’s name, “Sylvia,” inked on his forearm in elaborate letters.

Sylvia Pearson, of Lenexa, spoke at Wednesday’s sentencing, describing the unending agony of losing Hooks, whom she called “my child.”

She told the judge her son was a “good person” who came from “good stock,” with parents and other relatives who worked in law enforcement, the military and the federal government.

Pearson got married this summer, and Hooks came out for the wedding, she said. He was living in North Carolina but no longer had relatives there, so Pearson begged him to stay to be closer to her and his siblings.

Hooks quickly got a job working at the Amazon warehouse, where he’d already gotten a raise and clearance to operate a forklift, Pearson said. She said Hooks “trusted” someone he’d just met at work, and came with him to Lawrence that night.

“My son came to Kansas June 1, and he was dead Sept. 2,” Pearson said. “What they did is going to affect me and mine forever.”

Neither defendant spoke at Wednesday’s sentencing hearing. Their attorneys, Michael Clarke and Forrest Lowry, said they advised them not to, as they plan to appeal their cases.

Upon release from prison, both Carvin and Singleton must remain on supervision for three years and register as violent offenders for 15 years, the judge said.

Both men said they had no money — when asked the last time he was employed, Carvin said he’d never had a job — so Pokorny declared them indigent and waived fees.

A third man who was on trial alongside Carvin and Singleton will have a new trial, currently scheduled to begin Jan. 22.

Shawn K. Smith, 19, of Kansas City, Mo., faced the same charges as the other two men, but the jury couldn’t agree on a verdict and a mistrial was declared in his case.

The same jury acquitted all three defendants of charges that they used a gun to threaten and try to rob an additional victim in the hotel room. That man, Mathdaniel Squirrel, described the incident during a preliminary hearing but didn’t show up to testify in person at the trial. 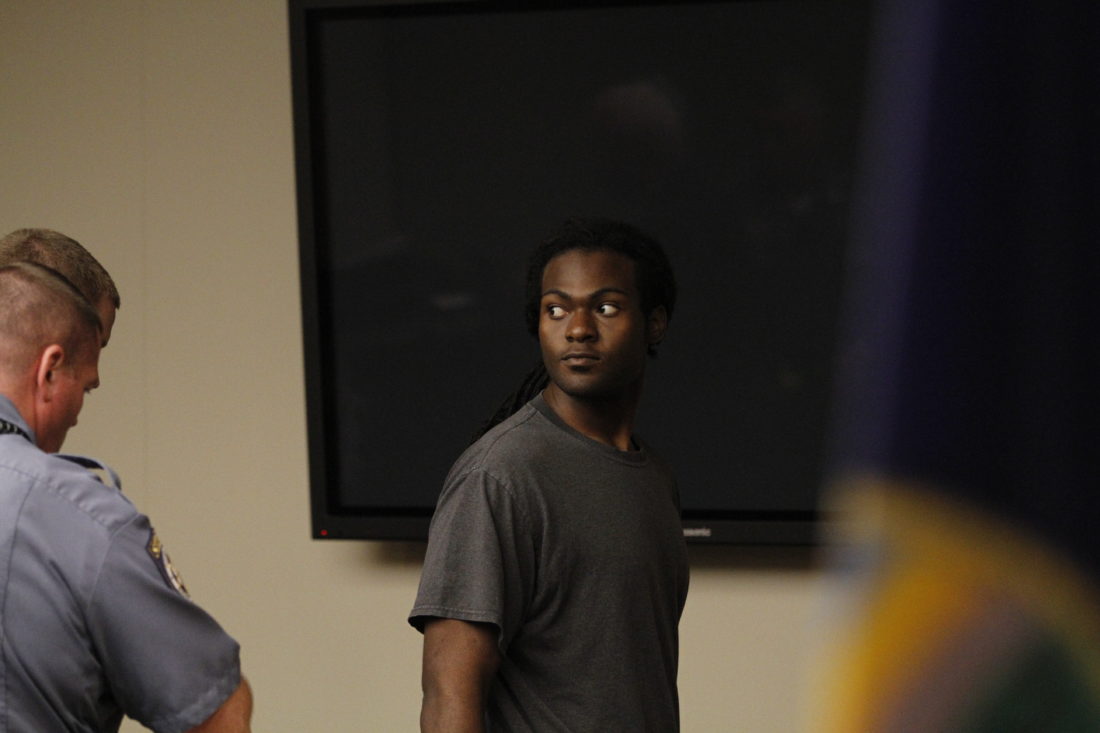 Ramone Singleton leaves the courtroom after being sentenced on Wednesday, Oct. 10, 2018, in Douglas County District Court. A jury previously convicted Singleton and co-defendant Tyrone J. Carvin of voluntary manslaughter, aggravated battery and aggravated assault from a Sept. 2, 2017, shooting at Lawrence’s Motel 6 that killed 23-year-old Cameron Hooks, of Lenexa, and wounded two other men.