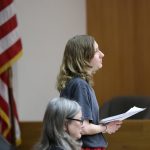 Tria L. Evans reads a lengthy statement at her sentencing hearing on Tuesday, March 19, 2019, in Douglas County District Court. Evans was sentenced to life in prison for the premeditated murder of the father of her child. Evans appeared with alongside attorney Carol Cline.

For the extensively premeditated and violently executed murder of her ex-boyfriend, Tria L. Evans should be locked away for the rest of her life, prosecutors told a judge Tuesday.

“This woman does not deserve to see the light of day,” Amy McGowan said.

And she may not.

Douglas County District Court Judge Kay Huff sentenced Evans, 39, of Lawrence, to life in prison for the crime, noting that under the Kansas “Hard 50” sentence Evans would be almost 90 years old before she could even ask for parole.

In handing down Evans’ sentence, Huff emphasized the plotting that went into killing the victim.

“This was very premeditated,” Huff said. “It doesn’t get much more premeditated than this case.”

Evans and Wales never lived together but had a tumultuous relationship, which disintegrated after the birth of their daughter in 2014. Evans has two older children, as well.

Prosecutors contended that an angry, jealous and possessive Evans stalked Wales for years and plotted his death for months.

Wales was shot six times before gasoline was poured over his body and lit on fire along with the house, according to evidence at Evans’ trial. Neighbors called 911 when they heard a spurt of gunshots and saw a female figure run to a car in the driveway as flames erupted on the front porch.

Evidence included a GPS device from the getaway car showing that it drove from Evans’ alleged conspirator’s house to her house, then to the scene of the crime at the precise time of the crime, and back again.

Testimony also featured friends saying that Evans had asked them to kill Wales before, as well as friends of Wales describing Evans stalking him and causing him to fear for his life.

Wales’ mother, now the guardian of the couple’s young daughter, said she would not forgive Evans for killing her son.

“Nobody deserves to die that way,” Debbie Wales told the judge before Evans was sentenced.

Wales said she struggled with how to explain to a little girl what happened to her father and why she also no longer has a mother in her life. Wales said she grieves for the child because her father won’t be there to see her grow up, teach her to drive, meet her first boyfriend or walk her down the aisle when she gets married.

“Most importantly,” Wales said, “he is unable to protect her.”

Evans said jurors in her case delivered a “faulty verdict” based on “mostly incorrect information.”

“I did not kill Joel,” Evans said. “I have been very grieved and sorrowful about Joel’s death … and I have forgiven the person who killed him.”

After asking the judge to be patient so she could tell her story, Evans proceeded to spend nearly 45 minutes reading a scathing handwritten statement demonizing — one by one — Wales, his mother, trial witnesses, prosecutors, law enforcement and the criminal justice system in general.

Evans did not take the stand during her trial, but most of the claims she made Tuesday were contradicted by witnesses who did.

She said Wales was the abuser in the situation, not her. She called him violent, hateful, dishonest and driven by his drug addiction. She said he abused both her and their daughter.

Evans called herself a peaceful, loving and devoted woman who “shared a life” with Wales despite early “red flags.” She said Wales’ abuse drove her into depression and substance abuse, which forced her out of her career, formerly as a nurse and doula.

Evans claimed she tried to get help from community resources and the legal system but was treated unfairly and “gave up.” She called the court corrupt and run by prideful, selfish people.

“I am not a danger to the community or anyone else. Your legal system is the danger,” she said, adding, “You have no right to judge me … only God has that right.”

Evans asked the judge for mercy in sentencing.

“My children and I deserve a peaceful long life together, and I ask you to give us that chance,” Evans said.

Evans wept and wiped her eyes with tissues as she read her statement.

It was the only obvious outward emotion she’s shown in court — both before and during her trial, or minutes after concluding her statement as she was sentenced to life in prison and escorted from the courtroom.

McGowan asked that sentences for all those crimes run end to end, meaning Evans would be imprisoned longer than the Hard 50. However, Huff ordered the sentences to overlap instead.

Evans’ appointed attorney, Carol Cline, did file a request for a new trial, which the judge denied, citing strong evidence in the case.

“The jury said later that they found the evidence overwhelming,” Huff said, adding that they said the GPS device from the car was particularly “powerful.”

Prosecutors, Douglas County Sheriff’s Office agents and family members of Wales attending Evans’ sentencing hearing will be back in the same courtroom in less than a week.

The woman Evans allegedly conspired with to kill Wales is scheduled to go on trial beginning Monday.

Christina L. Towell, 38, of Leavenworth, is charged with the same crimes Evans was convicted of.

For her part, according to the charges, Towell got personal information and a photograph of Wales from Evans and provided it to another person, and also drove Evans to and from the scene of the crime.

Law enforcement said they found the GPS device that helped convict Evans inside Towell’s red Ford Mustang after the murder. 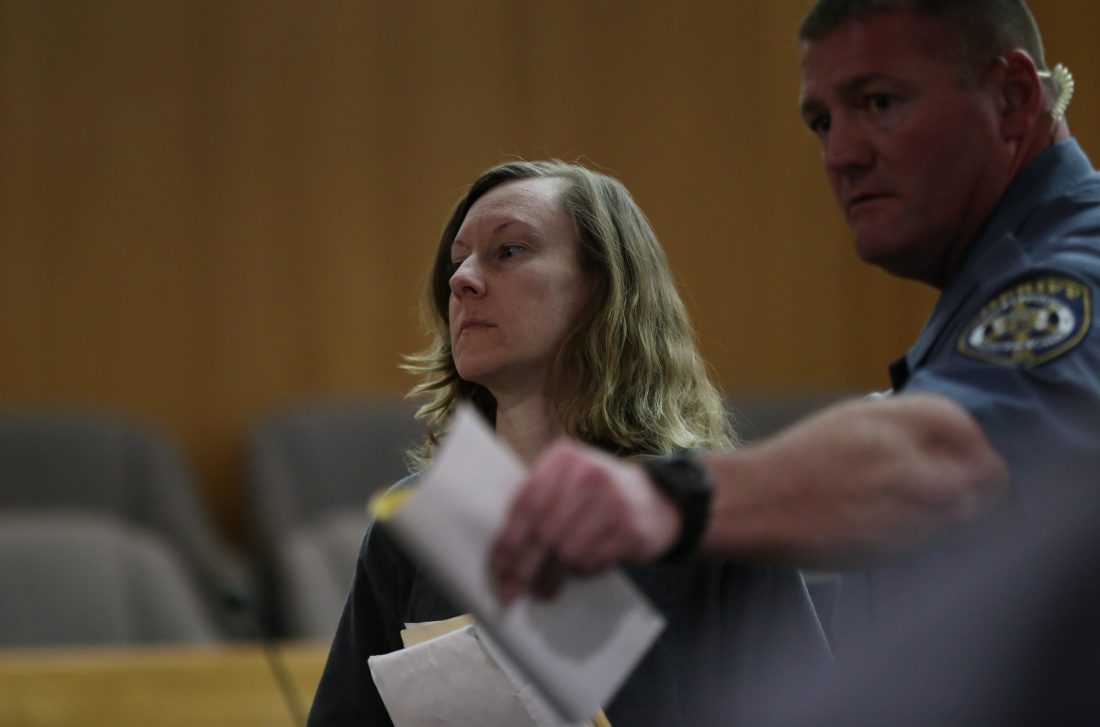 Tria L. Evans is escorted from Douglas County District Court on Tuesday, March 19, 2019, after being sentenced to life in prison for the 2017 premeditated murder of the father of her child.