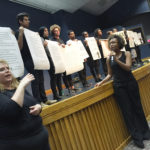 A group of about a dozen, mostly black Kansas University students that carried signs onto the stage and temporarily took over Wednesday’s town hall forum on race read a list of 15 demands they had of KU.

I didn’t have much information on those demands in my story about the forum. They were only one scene in an event that lasted more than two hours and included many voices from students and faculty of all colors. (Also, the woman who read the demands on stage refused to give me her name or answer any questions about them afterward.)

Thursday, the group — which called itself by the hashtag it’s using on Twitter #rockchalkinvisiblehawk — published its demands in a tweet from @InvisibleHawks. Here’s their list, word for word.

Below some of the demands involving issues I’m familiar with, I’ve added, in parenthesis, additional notes and links I think are helpful for context.

Demands for the University of Kansas Governing Bodies

1. Director of OMA hired by December

(Former Office of Multicultural Affairs director Blane Harding left KU in May. Precious Porras has been interim director since.)

2. Mandatory, intense “inclusion and belonging” training for all levels of students, staff, faculty, and administration

(The comprehensive survey aims to assess KU’s climate in the following areas: respect and collegiality; communication, collaboration and cooperation; overall work and academic environment; and diversity, equity and inclusion, according to KU’s Office of Diversity and Equity. KU has contracted with Rankin & Associates Consulting to conduct the survey, and it’s currently scheduled to be sent out in fall 2016.)

(KU’s Office of Institutional Opportunity and Access is charged with investigating reports of discrimination on campus — including sexual harassment and sexual violence — and recommending disciplinary action. Director Jane McQueeny resigned in October, and KU currently is searching for a replacement. The office still has four employees. )

(It’s not labeled as a diversity hiring program, but KU’s “Hiring for Excellence” initiative aims to get more candidates of color on campus and, ultimately, hired. I wrote about the effort earlier this year, and administrators said increasing faculty diversity is a challenging goal but credited the initiative with making some progress so far.)

6. Increase the percentage of underrepresented domestic and undocumented students

(Some students have complained that a Student Senate decision to raise the spending cap for elections prevents minority students from running for office.)

8. Increase aid and assistance to active military and veterans

(The number of vets at KU is going up. I just reported some numbers this week, along with plans to build a new Student Veterans Center inside Summerfield Hall once the business school moves out.)

9. Establish team of multicultural counselors to specifically address severe mental illnesses and the needs of students of color by Fall 2016

(Under Kansas law, concealed weapons must be allowed on public university campuses beginning in July 2017. The Kansas Board of Regents currently is seeking input from KU and other universities to develop a policy covering how the new law will be implemented.)

11. Remove all professors who assault, sexually harass, or engage in abusive relationships with students. Apply this policy retroactively as well, specifically to Dr. [name redacted by the Journal-World]. Immediate expulsion of those that commit sexual assault.

(Several years ago a female student accused the professor listed by name of sexually harassing her, and she was unhappy with how KU handled her complaint. KU does not release information about individual investigations.)

(KU Black Student Union president Kynnedi Grant said during Wednesday’s forum that she and several black friends were physically assaulted and called a racial slur at an off-campus house party on Halloween. A police report was not filed, Grant said Wednesday. It’s unclear if the women filed a report with KU IOA, though Grant posted an account of the event on her Facebook page earlier this week. After the forum, Grant declined to answer my questions about the incident.)

UPDATE: On Friday, Lawrence police confirmed they are investigating the incident as a battery and aggravated assault case.

13. Reopen investigation into the murder of Rick “Tiger” Dowdell

(Dowdell, a 19-year-old black Lawrence resident, was fatally shot during a gun battle with police near Ninth and Rhode Island streets in July 1970, a summer filled with race-fueled violence at KU and throughout the community. The Kansas Bureau of Investigation determined that Dowdell had exchanged fire with a Lawrence police officer and that a bullet from the officer’s gun killed Dowdell, according to previous Journal-World reports. A coroner’s inquest found that Dowdell’s death was justified. KU does not have jurisdiction over homicide investigations.)

15. Thorough plan of action from Administration by January 19, 2016