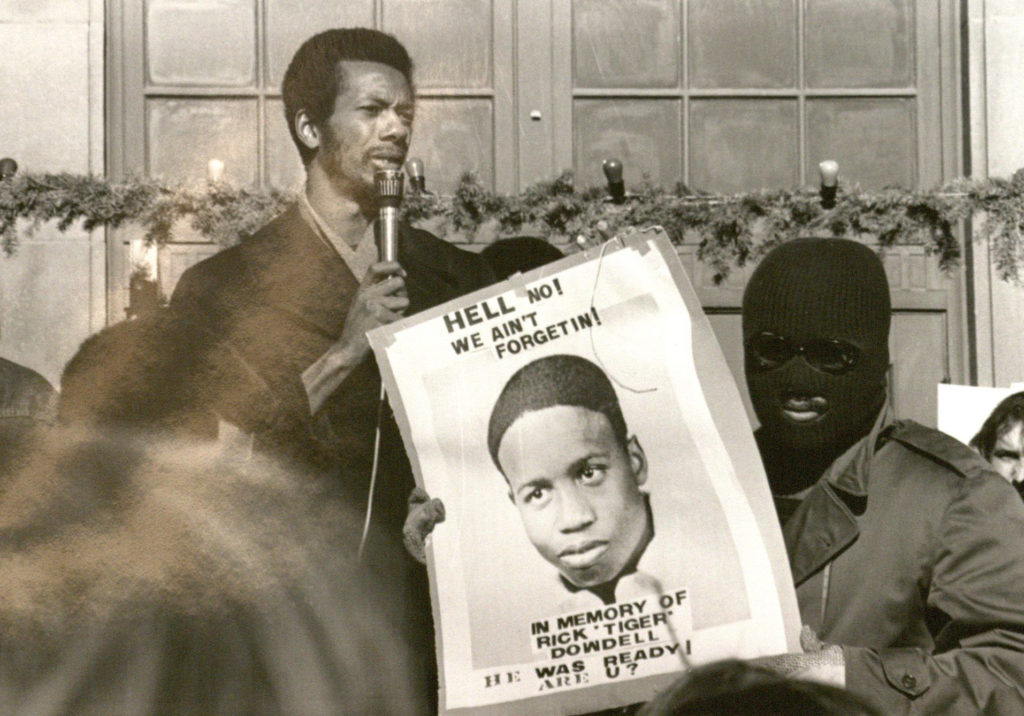 Protesters speak out against the death of Rick Tiger Dowdell at KU. Dowdell was killed by police on July 16, 1970.

Rick “Tiger” Dowdell, a 19-year-old black man, fell dead in an alleyway off Rhode Island and Ninth streets. He was killed by a police officer’s bullet.

Four nights later, Lawrence police fired into a crowd that had just overturned a Volkswagen along Oread Avenue. Harry “Nick” Rice, a white 18-year-old man from Leawood, died in the chaos that followed. Several in the crowd carried Rice’s body into the Gaslight Tavern just off the KU campus, which quickly filled with tear gas coming from police.

Forty years later, some in the Lawrence community still debate versions of those events.

Dowdell was shot in the back of the head while running down an alleyway. By all accounts, Rice was a bystander witnessing the events on Oread Avenue, not a radical.

A report from the Kansas Bureau of Investigation was inconclusive on whether Rice died from a police officer’s bullet.

The same KBI report determined that Dowdell had exchanged fire with Officer William Garrett and that a bullet from Garrett’s gun killed Dowdell. A coroner’s inquest found that Dowdell’s death was justified.

Rusty Monhollon, who researched those summer days for his book “This is America? The Sixties in Lawrence, Kansas,” wonders what good it does to lay blame 40 years later.

“It was part of all sides not understanding each other and not making an effort to understand one another,” he said.

What is important in remembering the events of 1970 is the context, Monhollon said.

In the spring of 1970 and from a window inside Lawrence High School, Andy Benton watched as black students gathered across the street at Veterans Park.

“I knew that as they came across the street, there was probably an equivalent number of white students and there was going to be a confrontation. And there was,” said Benton, who was student body president that year.

In the middle of the chaos, he found a classmate who had been hit in the head with a brick and was bleeding heavily. Benton took the boy to the principal’s office. Then Benton demanded outside help.

The violence that swept through Lawrence in 1970 had just as much to do with strained race relations as moral opposition to the Vietnam War, Monhollon said.

Riots broke out at Lawrence High School the same month the Kansas Union was set on fire and curfews went into place.

Benton mostly remembers feeling angry that no one — not the school, not the police, not the students — was prepared for the social discontent that seemed to flow down from Kansas University.

“Very sophisticated, complex, difficult issues were being debated, discussed and fought over up on the hill,” Benton said. “Maybe they were equipped for them. But we were not equipped to deal with it.”

Black students at LHS were angered by the lack of black cheerleaders and homecoming queens. They wanted an expanded black studies curriculum and more black teachers. On April 13, to make those demands heard, 50 students locked themselves inside the high school’s main office.

By the time 1970 ended, Lawrence would experience many acts of violence, protest and unrest. A three-day series explores that stormy year.

Thursday: How 1970 shaped the city and its future.

The black students’ demands, which some may deem trivial, represented racial injustices that ran much deeper, said Jesse Milan, the first black teacher hired in Lawrence’s integrated school system in 1954.

Still fresh in the minds of many blacks were days when Lawrence had segregated schools, businesses and movie theaters.

Even in 1970, blacks weren’t hired as downtown sales clerks or bank tellers, Milan said. The city had undrawn lines on who lived where. And as the city’s commercial districts grew, residential areas for blacks shrunk.

Just three years before the unrest in 1970, city residents approved funding to build a public swimming pool. It was a campaign that took more than two decades and several bond proposals before voters passed it. For those in the black community, the failure to pass the bond was seen as race issue.

Among those protesting the segregated pools was Harold Shepard, a black activist in Lawrence who said that by 1970 many in the black community had had enough.

Hours before Dowdell’s death, a woman was shot in the leg while standing in her backyard at Ninth and New York streets. Witnesses said the men who fired the shots ran about two blocks to the Afro House, a home at 946 1/2 Rhode Island where members of the Black Power Movement gathered.

Soon afterward, Dowdell left the Afro House with a friend in a Volkswagen. Police followed. The car stopped. Dowdell ran down the alley. Officer Garrett pursued him.

Stephen “Jere” Dowdell, one of Tiger Dowdell’s six older brothers, was at the Afro House when he heard the news that his brother was shot. He walked into the alley and found him dead.

That night in anger, Stephen Dowdell began shooting out the windows of the police station. He didn’t stop until he ran out of bullets.

Dowdell was never charged for shooting the station. But in the wake of Rick Dowdell’s death, animosity between the Black Power Movement and police reached new levels of violence. 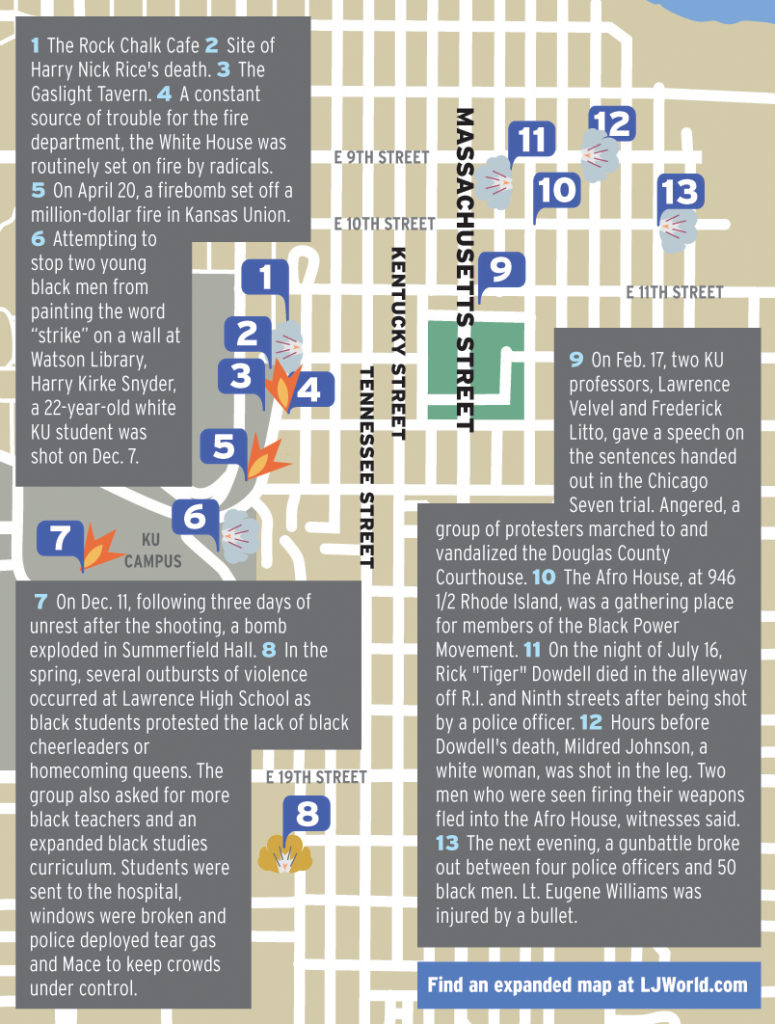 “We all got together and we had guns and stuff. We just went out into the neighborhood and any police car that would come by, we would shoot at them,” Dowdell said. “And it wasn’t that we were trying to hurt anybody, we were just trying to put some scare into them.”

The night after Rick Dowdell died, a gun battle broke out between four police officers and about 50 black men, according to the KBI’s report. Police Lt. Eugene Williams was injured in the crossfire.

Tempers eased with the arrival of Col. William Albott, the Kansas Highway Patrol superintendent who walked among the radicals, hippies and street people living along Oread Avenue.

Among those Albott talked to was George Kimball, who at the time was known as leader of the street people. Today Kimball says he wasn’t negotiating for anyone, but he was able to appeal to Albott’s sensibilities that less law enforcement was needed.

“They curtailed the show of force. So you didn’t have them marching around with bulletproof shields, riot gear and automatic weapons on the street,” Kimball said. “That did contribute to a lessening of tension.”

Youth is killed in gun battle

No one else would die that year from the city’s civil unrest, but violence continued. In December, the Black Student Union at KU protested the firing of Gary Jackson, an assistant to the dean of men. Jackson had purchased ammunition the day after Dowdell’s death. Throughout campus, students spray painted the word “strike” on buses, sidewalks, buildings and statues.

On Dec. 7, Harry Kirke Snyder was shot in the neck when he confronted a pair of students spray painting the stairwell of Watson Library.

While protests continued in 1971, they were was mostly lacking the violent undertones. Some say the social discontent faded when outside agitators moved on. Others said the deaths of Dowdell and Rice prompted people to re-evaluate their actions.

As for the police officers, Garrett was relieved of his duties until the findings of a coroner’s inquest, which determined the shooting was justifiable. He left Lawrence shortly afterward.

The KBI never determined who shot Rice. And Lawrence police officers were cleared in a wrongful death lawsuit that Rice’s parents brought before the courts.

And, eventually, change would come to Lawrence, even if it didn’t arrive with the force or speed many protesters had hoped.