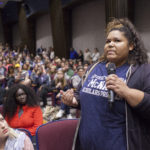 Trinity Carpenter, Kansas University senior from Ottawa, speaks during a KU town hall forum on race Wednesday at Woodruff Auditorium in the Kansas Union. Carpenter shared her concerns about how to speak up about race issues on campus without worrying about consequences.

About 1,000 people attended the event in the Kansas Union, filling the seats and lining the walls of Woodruff Auditorium, and also filling an overflow room across the hall.

In the crowd were KU students, faculty and staff of all colors, plus a number of community members and local and state elected officials.

At the front moderating the forum — and taking a fair amount of heat directly — was KU Chancellor Bernadette Gray-Little.

Gray-Little opened the forum by saying that KU has offices, staff members and initiatives dedicated to increasing diversity but needs to do more. She said KU has an obligation as a university to encourage thoughtful conversation.

Since it was founded 150 years ago, KU has always been open to minorities and to women, Gray-Little said, although it hasn’t always been “faithful” to those values in practice.

“I know and you know that there are still instances of racism here,” she said.

“It’s disappointing that we are still talking about these topics, but we do still need to talk about them.”

And for more than two hours, people did.

‘More than one kind’ of racism

Part of the conversation revolved around which issues KU needed to address.

One of the first to take the mic was a black female student who criticized Gray-Little for using “diversity rhetoric.”

“Why can we not just call it anti-black racism?” she said.

Gray-Little disagreed, saying, “There is more than one kind that is going on.”

Speakers that followed included a Native American student, a gay Asian instructor and a Latina communications student who said they, too, had been hurt by racial and sexual jokes and slurs.

The Native American student — in tears — said he’d had people ask him why he got so upset by things like cultural appropriation on Halloween.

“Whenever you ask me that, you are diminishing my ancestors that were killed on the Trail of Tears,” he said. “You’re telling me to ‘get over’ the genocide of my people, and I am not OK with that.”

One trend that emerged from students of color was stories of instructors and professors ostracizing them — whether purposely or unwittingly — because of their race.

One light-skinned black female student said an instructor asked her whether she was half white, and when she said she was not, the instructor suggested that she tell people she was.

Another black female student and track athlete said that she’d been in classes where she was the only black student and had instructors single her out and ask her her opinion on things as though she represented all black people.

The majority of speakers, however, were black — including most in a group of about 12 holding signs that took the stage midway through the forum, interrupting Gray-Little and other students to speak and read a list of demands.

The group said they were called “Rock Chalk Invisible Hawk,” the same as a hashtag that emerged last year within the KU community.

Student Kynnedi Grant, president of KU’s Black Student Union, said from the stage that she and some friends were verbally and physically assaulted at an off-campus house party on Halloween, called racial slurs and had a gun pulled on them.

Grant shared the story on social media this week. She said no police report was filed.

Grant said KU’s forum was not an attempt to hear student voices but rather an attempt to “silence” them. “Don’t be fooled,” she told the crowd.

Another black female student read a list of the group’s 15 demands, including hiring a new Office of Multicultural Affairs director by the end of the year (the position has been vacant since May), creating a separate multicultural student senate, giving more support to veterans and banning concealed carry of guns on KU’s campus (which Kansas law says must be allowed beginning in 2017).

After the group left the stage, she declined to give her name to a reporter or answer follow-up questions. However, members of the group presented their concerns later in the evening to the Student Senate Rights Committee, which passed a resolution to address them, according to tweets from a University Daily Kansan reporter at that meeting.

KU’s forum was held in response to a race-fueled crisis on the University of Missouri campus. On Monday, MU System President Tim Wolfe and MU Chancellor R. Bowen Loftin resigned under pressure from students who said the school failed to properly respond to racial problems there.

KU announced its forum on Monday.

A number of Wednesday’s speakers made suggestions.

They included requiring cultural training for all staff, requiring all students to take courses such as African-American studies or Latin American studies, and giving more money to minority student organizations such as the Black Student Union so that they would have as much money as “privileged” organizations. One student even said Gray-Little should give those groups money from her salary.

Another student suggested increasing diversity of faculty and staff, “and not just in positions that pertain to their culture or race.” He used African-American studies as an example — everyone expects African-American instructors there, but there should be more in other disciplines.

The student also suggested KU do more to “punish” students for acts that offend others and asked white people in the room to support peers of color by recognizing their “white privilege” and not tolerating racist comments or jokes by family members or others.

“The university has programs, we have offices, we have people doing stuff,” she said. “It’s not enough.”

One student told Gray-Little she sounded like Roger Goodell or Donald Trump.

“I don’t want to sit in here and waste everyone’s time when we’re not going to do anything,” he said.

Another student told her, “All I have to say is do your job or get replaced.”

Gray-Little closed the conversation saying it was valuable to hear about students’ experiences and that she knew they were real.

She did not make on-the-spot promises.

She added that she wanted to see the individuals and groups continue to be involved.

“I am dedicated to making changes,” she said. “I make that commitment to work with you.