Lawrence Vice Mayor Brad Finkeldei is highlighted in this screenshot of Lawrence city staff and city commissioners from the city's virtual meeting on May 19, 2020.

Questions are still mounting more than a week after Lawrence city leaders agreed to pay more than $100,000 to the outgoing police chief, despite no contractual obligation to do so.

The Lawrence City Commission on May 19 approved an agreement to pay outgoing Lawrence Police Chief Gregory Burns Jr. a minimum of $106,805, representing nine months’ worth of his salary, as a “separation payment.” Depending on his moving expenses and any losses he might incur in the sale of his home, he could receive up to $20,000 on top of that. All amounts are less taxes, deductions and withholdings.

The only official reason city officials have given for the payment was a brief phrase included in the agreement that said “the City desires to provide Burns with certain benefits to assist him in his transition away from employment with the City.”

The Journal-World began inquiring more about the city’s decision to provide financial assistance to Burns because it has not been common for the city to provide that type of assistance to other employees who have decided to leave the city’s employment, especially if they don’t have an employment contract. 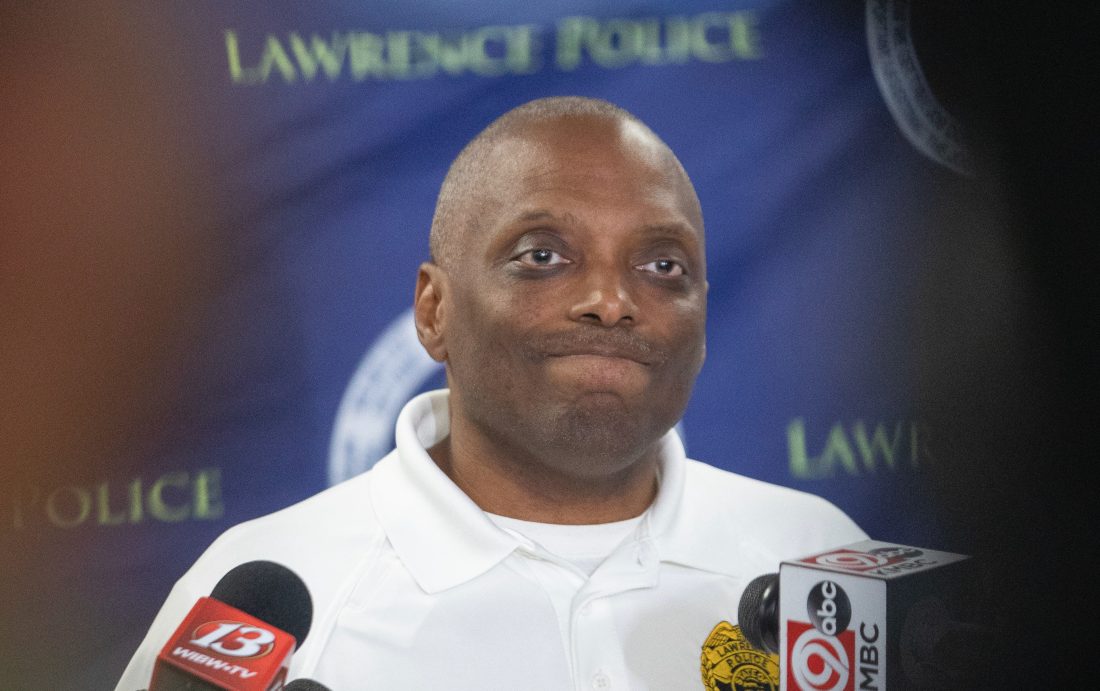 The Journal-World this week confirmed with the city clerk that Burns had no employment contract with the city, meaning there was no buyout clause or other prenegotiated separation agreement the city was required to pay if Burns was asked to leave the city’s employment. The city has stopped short of saying it asked for Burns’ resignation, but rather has said it was a “mutual decision” for the chief to leave. Earlier this year, the city’s police union approved a vote of no confidence in Burns, but the union’s leaders have declined to state why the union lost confidence in the chief.

City Manager Craig Owens also has provided few public details about why he recommended the $100,000-plus payment. He also has said little about what he knows of Burns’ performance as chief. Earlier this year when questioned about the union’s no-confidence vote, he said the message he’d received was that there was a lack of direction and poor lines of communication.

The lack of an employment contract means the $100,000-plus payment is both unbudgeted and discretionary on the part of the City Commission. Traditionally, unbudgeted and discretionary spending items get significant scrutiny by the commission. This one comes at a time when the city, facing financial hardships due to the pandemic, is projecting a budget deficit of approximately $8 million to $12 million.

The Journal-World reached out to each city commissioner to find out what information they had been given to determine whether the unbudgeted expenditure was appropriate. Mayor Jennifer Ananda declined a request for an interview and also declined to answer a list of questions sent to her via email. She cited a general concern about discussing personnel matters. Other commissioners did answer questions, but in several instances either said they lacked information or declined to provide it to the Journal-World. Those issues included:

• Commissioners either declined to answer or said they weren’t given much information about why Owens felt it was in the best interest of the city for Burns to resign as police chief. Owens has hiring and firing authority over the police chief, but spending issues related to the position are subject to City Commission approval.

Some commissioners, though, did say they can understand why members of the public may have questions about the payment. Commissioner Lisa Larsen said the commission is always striving to improve trust in government and make the situation better. Whether this impacts those levels of trust, she said, is up to whoever’s interpreting it.

“I do believe that we are doing our best under the rules that we have with personnel to address this,” she said. “Does that mean more can’t be done? That’s a strong possibility.”

Besides detailing the separation payment, the agreement also includes other provisions that limit what Burns can say about the city. Burns cannot make any comments “to the media or to others that may be considered to be derogatory or detrimental to the good name” or business reputation of the city or city officials. The city, in turn, agreed to instruct Lawrence Police Department command staff and the city manager “not to disparage Burns while operating in their official capacity.”

Burns also agreed to release the city from any claims, pending or future, though the document does not limit his right to engage in any protected activity, including filing a charge with the Equal Employment Opportunity Commission, which handles workplace discrimination complaints, among other issues. Burns was the city’s first black police chief since a black man held the job of city marshal in the 1890s.

Larsen and Commissioner Courtney Shipley, reached by phone Wednesday, answered several questions from the Journal-World about the agreement. Specifically, both were asked what they would say to members of the community who might perceive the agreement as “hush money,” given that Burns is being required to release the city from any claims and is barred from making negative comments against the city.

Shipley said she doesn’t think that’s “how we talk about things in this community.”

“That’s very pointed and intentionally inflammatory, and I don’t think that’s what the situation is, as far as I can tell,” she said. “This is a legal agreement between two parties and two parties have made appropriate, adult concessions, and if it’s in someone’s interest or political interest to make it inflammatory, that’s certainly up to them.”

Larsen said in response to the same question that she thinks “we need to make sure that we appropriately question” personnel issues that need to be addressed, bearing in mind the limits on what information can be released in personnel matters.

“I’m not seeing it (as hush money); however, everybody’s entitled to their interpretation,” she said. “And again, I go back to if there’s more information that can be released legally, then it should be released, and then folks can make their own judgment on how it was handled.”

The Journal-World asked why the city wants a contractual guarantee that Burns will not disparage it or city officials, given that ordinary members of the public are able to do so at any point, including during public comment sessions of City Commission meetings.

Often the city has asked for public feedback on issues, either negative or positive, in an effort to improve city operations. This agreement, however, creates questions about whether Burns, if he were so inclined, could publicly share details about problems within the police department or mismanagement by his superiors in city government.

Both Shipley and Larsen said they weren’t entirely sure of the scope or intent of some of those provisions.

“I don’t remember reading that in the verbiage,” Shipley said of Burns’ agreement not to disparage the city or city officials. “As an American, I suppose he could disparage us any way he chooses. I don’t believe I agreed to say that he has no freedom of speech.”

After the Journal-World read back the language in the agreement, Shipley said the newspaper could ask Burns how he interprets it. The newspaper has been unable to reach Burns.

Larsen said she didn’t have much comment on that question beyond what was written in the separation agreement. Larsen, upon further questioning of details in the agreement, did say some further discussion about the breadth of the agreement might be warranted.

The agreement doesn’t seem to limit Burns’ future comments to his time with LPD, but rather states he will not “in any way disparage” the city or city officials. That creates questions about whether he would be able to express a political opinion about a city commissioner running for reelection, for example.

“I think that that goes to a legal question, and if it means giving up somebody’s First Amendment rights, I think that would be something that would need to be discussed,” she said, and noted that she’d need to look closer at the language in regard to that interpretation.

Vice Mayor Brad Finkeldei did not participate in an interview with the Journal-World, but did send a general statement via email Wednesday to a list of questions provided to him. Finkeldei, a private practice attorney, previously told the Journal-World that he thinks such nondisparagement agreements are relatively common.

Nondisparagement agreements are common in the corporate world. It wasn’t immediately clear how often the city has used them with their employees or other parties, though Larsen said she did not recall seeing one previously in her tenure as a commissioner. Settlement agreements in which commissioners have been asked to approve a financial payment have been relatively rare.

Commissioner Stuart Boley also participated in an interview with the Journal-World, but he declined to comment on most of the questions related to the agreement.

Boley, when questioned about how he determined whether the $100,000-plus payment was appropriate, did say he felt he had enough information to make a good decision. Other commissioners who commented also said they felt they had adequate information and trusted Owens’ judgment in the matter.

Burns started his job with LPD on Oct. 2, 2017. He is using up his accrued vacation time, and his resignation goes into effect June 12. Longtime LPD Capt. Anthony Brixius has been appointed interim chief.

It is not yet clear how the hiring process for the new police chief will be conducted. The process that hired Burns, which was done under a previous city manager, involved large amounts of public input, including committees of residents who listened in on parts of the interview process for finalists.

Commissioners generally did not respond to questions about how the public could meaningfully weigh in on the selection of the next police chief if it did not have basic information about what led to Burns and the city parting ways.

Larsen, however, did say she thought this might be a good time to possibly take a long view of the police department and policies as a whole and evaluate more of the “big picture as to what’s going on.”

“We have got many, many great police officers out there, and I support them a hundred percent,” she said, “but we’ve got to make sure that all of our employees are able to thrive in a positive manner when they’re asked to either lead as a manager or as an employee.”

• June 15, 2017: Lawrence police chief candidates give views on policing, why they want the job