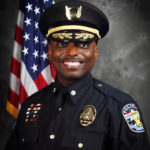 Burns, who will be the city’s first black chief of police, has been in law enforcement since 1993 and is assistant police chief in Louisville, Ky. Burns commands the Louisville Metro Police Department’s Support Bureau, which includes four divisions: major crimes, narcotics, community services and special operations.

Markus said the thing about Burns that resonated with him was Burns’ descriptions of how he connected with people in the community.

“He tried to resolve problems that came forward and really got personally involved in the community to help people resolve issues that they might have with not just the police department but with the community at large,” Markus said.

The police chief oversees the department’s 150 officers, 30 civilian staff members and an operating budget of $23.4 million. Markus said Burns’ starting salary will be $130,000.

In an interview with the Journal-World in July, Burns said his top objectives if selected as chief would be preventing and controlling crime while protecting the constitutional rights of all involved; increasing interactions between officers and the community; and improving transparency.

Burns said in a city news release that he is humbled to be afforded the opportunity to serve as the next chief in Lawrence.

“I look forward to working with the citizens and the men and women of the police department to make Lawrence a better place to live, work, play and learn,” Burns said in the news release.

Markus said that in addition to Burns’ interactions with people in his community, it was very clear to him that Burns spends a lot time working within his department to build relationships among the staff. Markus said that’s something he’d like to see transfer to Burns’ role as chief of the Lawrence police department.

“I thought he would probably enhance our efforts to bring the police department closer to the community,” Markus said. “And that’s my hope for him.”

Burns’ arrival will also coincide with significant facility improvements for the police department. The city’s 2018 budget includes $17 million for the construction of the first phase of a new police headquarters.

Burns earned a bachelor’s degree in criminal justice from Bethel University in McKenzie, Tenn., where he graduated with honors. He is also a four-year veteran of the United States Air Force. Burns was named a Dean’s Scholar while attending the Southern Police Institute at the University of Louisville.

The city received 31 applications for the position of Lawrence police chief and announced four finalists in June. The other three finalists, all of whom are from outside Lawrence, were Deputy Police Chief Simon Happer, of Overland Park; Police Chief Scott Lyons, of Papillion, Neb.; and Police Chief Stephen Monticelli, of Harrisonburg, Va.

Former Lawrence Police Chief Tarik Khatib confirmed in December that he planned to step down as the department’s leader this summer. Khatib had been with the Lawrence Police Department for more than 20 years and had served as chief since 2011. Markus appointed Lawrence Police Capt. Anthony Brixius as interim police chief beginning June 25 and continuing until Burns begins.

Burns will begin work on Oct. 2.

• Candidates for police chief share their plans for Lawrence