Lawrence police chief candidates give views on policing, why they want the job 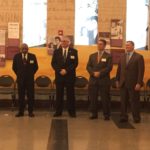 Residents of Lawrence got their first introduction to the four candidates vying to be the city’s next police chief at a reception Thursday evening at the Carnegie Building.

About 50 people showed up to the event, where they heard introductions from each candidate before having the chance to speak with them one-on-one.

“I did not take the decision to put in for this job lightly,” Assistant Police Chief Gregory Burns, Jr., of Louisville, Ky., told attendees. “I want to be your chief; I want to come to Lawrence.”

Burns, who has been in law enforcement since 1993, currently commands the Louisville Metro Police Department’s Support Bureau. Following the introductions, Burns later said that he is interested in the position because of Lawrence’s demographics. Specifically, he noted that Lawrence is a diverse college town with a growing population.

“The Lawrence Police Department is ready to grow, and I’m ready to grow,” Burns said. “I looked at it as a perfect marriage.” He added that he saw the number one job of policing as preventing crime while protecting the rights of all citizens.

Deputy Police Chief Simon Happer, of Overland Park, told attendees that as part of his position he’s learned the importance of community policing, and that he would like to bring that to Lawrence if selected as chief.

“You can have a lot of individual communities, but I believe that the best way we can cure the ills that we have right now going on in the United States is to think of ourselves as one community,” Happer said. “…I really fell in love with that idea of community policing and the importance of working with groups.”

Happer, who graduated from the University of Kansas, has served his entire 27-year law enforcement career in Overland Park. Later, Happer said that he enjoyed the years he lived in Lawrence, and that he sees the position as an opportunity to be part of the community and help make it more united.

“I’m not going to be a job jumper; that’s not what I want to be,” Happer said. “I want to really stay and be a part of the community. But I also see the opportunity here to bring the different communities that are here together, because I kind of get the sense that they’re kind of separate.”

Police Chief Scott Lyons, of Papillion, Neb., told attendees that the aspect of his career that he loves the most is interacting with the community. He said he thinks police departments need to be more than statistics.

“The quality of American policing is defined by how close we’re connected to the community,” Lyons said.

Lyons, who has been the chief in Papillion since 2015, began his law enforcement career in 1990 at the Raytown Police Department in Missouri. He later spent 20 years with the Lee’s Summit Police Department. Lyons, who also attended KU, later said what drew him to the job in Lawrence is the small-town atmosphere, including residents’ high level of civic participation and interest.

“That’s the kind of small town that I want to be a part of, because they actually care about what happens in the community,” Lyons said. “You don’t get that in a bigger city and certainly don’t get that in cities that have grown overnight, where everything’s new.”

Police Chief Stephen Monticelli, of Harrisonburg, Va., told attendees he thought an important aspect of policing is transparency. He said he believes in the importance of body-worn cameras, which officers use in Harrisonburg.

Monticelli, who has spent 37 years in law enforcement, has been the chief in Harrisonburg since 2012. Monticelli is originally from Columbia, Mo., where he served in various positions for about 11 years. He said he is interested in the police chief position because he sees Lawrence as very similar to Columbia.

“This gets me back to the Midwest,” Monticelli said. “I really love the city.”

Following the event, attendees were asked to fill out a feedback form about their impressions of each candidate and any comments they want City Manager Tom Markus to consider when selecting the new chief. Residents can also provide feedback online until 5 p.m. Monday via the Lawrence Listens survey.