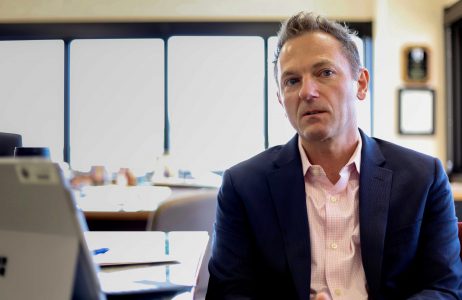 Lawrence City Manager Craig Owens is pictured during an interview with the Journal-World on March 5, 2020, in his office at City Hall, 6 E. Sixth St.

City Manager Craig Owens says he thinks unrest within the Lawrence Police Department stems from a lack of direction and problems with communications.

In his most detailed comments since the public learned last week that the Lawrence police officers union had taken a vote of no confidence in the chief of police, Owens did not endorse the union’s sentiments.

In a vote at the end of January, 92 of 100 voting members of the police officers union voted that they do not have confidence in Chief Gregory Burns Jr., the Journal-World found from documents obtained through a Kansas Open Records Act request. Six members abstained, and one voted that he or she does have confidence in the chief.

The reasons for that vote have remained vague, and none of the voters themselves have spoken with the Journal-World on the record. Officer Bill Bradford, chair of the Lawrence Police Officers Association, declined to comment about the vote last week. As of Thursday evening, he had not responded to an email sent Tuesday afternoon seeking an interview this week.

Burns, via email last week, said that he “came to the City of Lawrence for the right reason, which was to carry on in my career with my calling to serve.” He went on to say that he will continue doing his job and had no further comment.

Owens said during an interview with the Journal-World Thursday that the “pretty clear message” he’s gotten was that the conflict is related to poor lines of communication and lack of direction.

He also sought to rule out some other potential concerns: Owens said he has “not had any sense of” any suspicions of malfeasance on the chief’s part, nor of improper administration of justice.

“I wouldn’t want to … and I would expect the LPOA and other parts of our department wouldn’t want to reflect that we’re not providing great service or that there’s malfeasance in this,” Owens said. “That’s not my sense.”

Owens also said that he “did not pick up anything particularly about race” being an issue. As the Journal-World has reported, Burns is the first black man to hold the title of Lawrence police chief, and his department comprises 86.5% white officers.

“That shouldn’t be out there on the table,” Owens said of those concerns. “That’s not my perception.”

The city’s elected leaders have mostly stayed quiet on the union’s vote of no confidence, with the exception of Mayor Jennifer Ananda and Commissioner Lisa Larsen, who both declined to answer whether they have confidence in the chief. However, they noted that they do have confidence in Owens’ ability to manage personnel and handle the situation — “in a diligent and thoughtful manner,” Larsen wrote in an email, and “effectively and professionally,” Ananda said in a phone interview.

Vice Mayor Brad Finkeldei and Commissioners Courtney Shipley and Stuart Boley declined to comment and referred questions to Owens. None responded to follow-up emails listing questions that did not pertain to personnel matters, including whether the public has a right to know about what’s going on and whether the union handled the situation properly. Emails between union leaders and Owens had indicated that the LPOA did not intend to make the vote public knowledge unless “there is not appropriate leadership in place” by May 14.

Owens, who started in his position in July 2019, said he thinks the situation will resolve through the work in his strategic planning process. He’s made it a goal to listen to employees across the whole organization, as well as the community, to come up with a strong direction for the city, he said.

“When we get that clarity and we communicate that well and everybody sees their part to play in it, I think a lot of these concerns and issues that may be coming toward this conflict will help to be resolved,” he said.

“… If you get the vision right, everything else falls into place much easier,” Owens said. “That is what I think the police department craves and needs and deserves and … we will be able to address a lot of concerns if we are clear on our visions for the future.”

He also noted that policing has become “much more complicated” in the last few years, and he wants to get clarity in community expectations of how to make Lawrence a safe place for all people. That will give those who serve and lead the police department an “alignment for success,” he said.

“In my experience, blame and credit are rarely fairly attributed to a single individual,” Owens said he wanted to emphasize. “We are all in this together. We have important, vital work to do.”

• June 15, 2017: Lawrence police chief candidates give views on policing, why they want the job