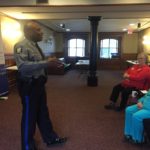 Strengthening ties between police officers and the community they serve is the “key” to public safety, Lawrence police chief Gregory Burns Jr. told the crowd gathered at the Watkins Museum of History.

About two dozen people attended Thursday’s “Hot Topic” discussion hosted by the League of Women Voters of Lawrence-Douglas County. Amid talk of police initiatives, violent crime rates and “bridging the gap” between officers and community members, Burns peppered his remarks with moments of humility and humor.

Confronting reality isn’t always pleasant, Burns told the crowd, but it’s the necessary work police officers do every day — even before their first official day on the job, in Burns’ case. The former Louisville, Ky., assistant police chief had only been in town “one night,” he said, when three people were slain in a spray of gunfire along Massachusetts Street on Oct. 1.

“I got here early Saturday morning; the shooting happened early Sunday morning. So I hadn’t even been here 24 hours yet,” Burns recalled. “Wasn’t even sworn in as your chief yet.”

The response from one audience member? “Thanks for staying,” generating some gracious laughs and cheers from the crowd. “You’re very welcome,” Burns said in return, with a smile.

Burns said Lawrence police officers “impressed” him in their response to the downtown shooting, the city’s first triple homicide in at least a decade. Since then, the police department has announced plans to implement the use of body cameras by the end of 2018. Coming from a police force that had already been using body cameras for three years, Burns said, he’s a “firm believer” in the tool.

“I believe they’re of great value. I believe that they increase accountability with officers,” Burns said. “I believe that they protect the public and officers by creating an impartial record of events, and they also allow for an immediate review (of events) … that provides invaluable evidence for investigators and for prosecutors.”

Burns on Thursday also shared the police department’s recent decision to purchase what he calls a FATS machine, short for firearms training simulator. At the Louisville police department, he said, the public was invited to take part in the virtual training system (Burns described it as a situation-based “video game”) as part of the city’s citizen police academy.

In the simulator, participants are placed into the kinds of potentially dangerous situations police often encounter and are given only seconds to react. It all comes down to “shoot or don’t shoot,” Burns said.

“It teaches officers how to handle a crisis situation and also is a good way for us to educate the public about the split-second decisions required of law enforcement,” he said, adding, “of course, what’s valuable to officers is, this is where you get to practice, because in real life you don’t get to practice.”

Burns, who was sworn in as chief just one day after October’s triple homicide, spoke again Thursday in support of building a new police facility in west Lawrence. “As an outsider,” Burns said, it was clear to him that more space and the ability to house disparate departments under one roof were needed.

“The community must come first, and we must make sure we are always working hard to address their needs,” he later said.

Building relationships and trust between police officers and community members, he said, will be one of his biggest priorities as chief. One initiative he hopes to introduce soon is a community service requirement for all police recruits as part of their training.

Making sure his officers “start learning the value of community,” if they haven’t already, “is important to me,” Burns said.

“Hopefully it will remain in them and drive them as they go forth in their careers,” he said of community service. “That’s something that hasn’t been done here that I’m bringing forth.”