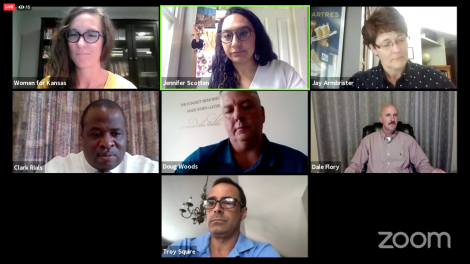 In this screenshot, candidates for Douglas County sheriff and undersheriff participate in an online forum on July 22, 2020. Pictured from left to right and top to bottom are moderators Tai Edwards, of the northeast chapter of Women for Kansas and Jennifer Scotten, of Native American/Indigeonus Voters in Lawrence-DGCO Kansas; Capt. Stacy Simmons, Lt. Clark Rials, Capt. Doug Woods, Deputy Dale Flory and Lawrence police Capt. Troy Squire.

Murder is the third leading cause of death for American Indian and Alaska Native women and girls ages 15-24, according to National Vital Statistics Reports from 2018.

That was among statistics that candidates for Douglas County sheriff heard during a forum hosted by Jennifer Scotten, of Native American/Indigenous Voters in Lawrence-DGCO Kansas, and Tai Edwards, of the northeast chapter of Women for Kansas, Wednesday morning.

The three Democratic candidates and their running mates, in the order in which they filed, are Lt. Jay Armbrister and Capt. Stacy Simmons; Deputy Dale Flory and Lt. Clark Rials; and Capt. Doug Woods and Capt. Troy Squire, of the Lawrence Police Department. No Republicans have filed, so the election will most likely be decided in the Aug. 4 Democratic primary.

Although the undersheriff candidates’ names don’t appear on the ballot, they have played a role in their running mates’ campaigns, and all three answered questions as part of Wednesday’s forum.

Scotten also shared that rates of violence against American Indian and Alaska Native women on reservations can be up to 10 times higher than the national average. She asked the sheriff candidates how they would navigate such issues with the local Native community.

All three candidates said they had not been aware of the statistics.

Flory said he thought it started with reaching out to Haskell Indian Nations University and having conversations locally. He said marginalized communities were suffering and being hurt, and law enforcement needed to facilitate conversations — “it’s on us to do that,” he said.

Armbrister said law enforcement — and middle-aged white males, as all three sheriff candidates are — need to take responsibility for things that have happened in the past that have destroyed trust. He said he didn’t have answers, but he would look to leaders in the culture and communities to find out how best to do it.

Woods said he wanted to build relationships within the Native community and to communicate that if there’s a missing person or an issue like that going on, law enforcement will investigate aggressively. He said he wanted to make sure that people were comfortable coming to the sheriff’s office to make reports. 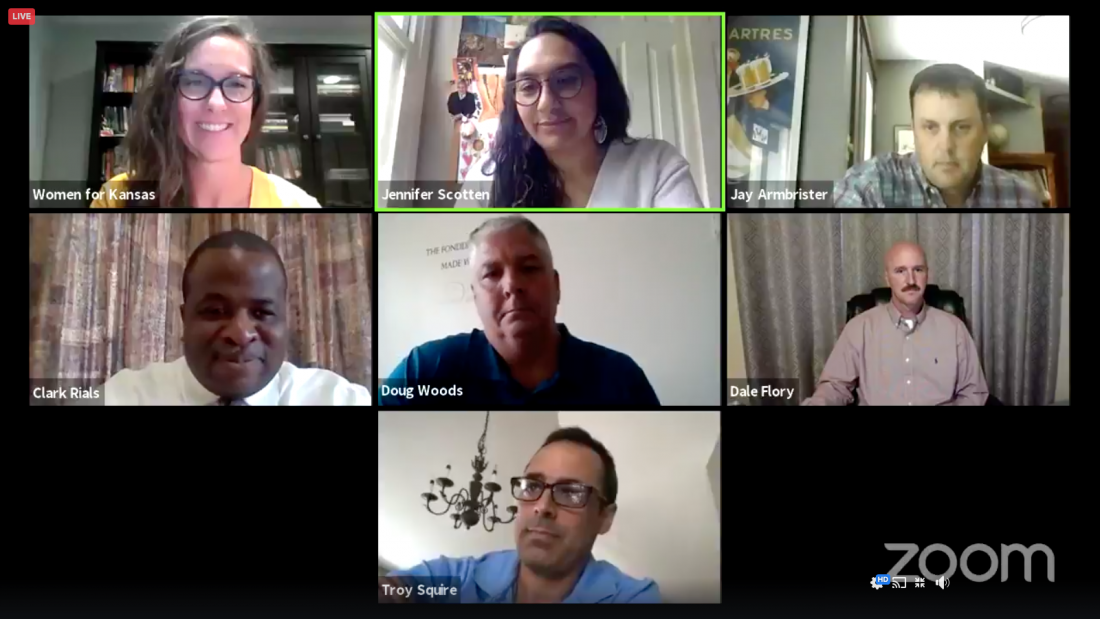 In this screenshot, candidates for Douglas County sheriff and undersheriff participate in an online forum on July 22, 2020. Pictured from left to right and top to bottom are moderators Tai Edwards, of the northeast chapter of Women for Kansas and Jennifer Scotten, of Native American/Indigeonus Voters in Lawrence-DGCO Kansas; Lt. Jay Armbrister, Lt. Clark Rials, Capt. Doug Woods, Deputy Dale Flory and Lawrence police Capt. Troy Squire.

Edwards asked the undersheriff candidates how they ensure the sheriff’s office is a welcoming and supportive workplace for women and how they prevent sexual harassment between members of staff as well as staff and members of the public or people in the jail.

Rials said the sheriff’s office has a strict policy on sexual harassment in the workplace, and each year employees undergo training on the topic. He said they also encourage victims to report harassment to their supervisors; if supervisors don’t address it, they’re “just as responsible” as the person doing the harassment. He said there’s zero tolerance in the agency, and he thinks they practice that well.

Squire said that the Lawrence Police Department has worked to recruit more female applicants and that having “more women wearing the uniform” shows a more welcoming environment for women in law enforcement. He said the sheriff’s office could not allow inmates in the jail to be victimized, and education, strict policies and enforcement were key.

Though she didn’t elaborate on the specifics, Simmons said she experienced sexual harassment yesterday, and “we have to address it.” She said that seeing people in positions of rank “shut that down” shows those in the lower ranks that it’s OK to do the same. She said it’s getting easier to hire women, because if women feel that the sheriff’s office is a safe place to work, they’re comfortable recruiting other women to come work there.

The full video of the forum is available on the Women for Kansas Facebook page, facebook.com/W4KNE/.

At 10 a.m. Thursday, the groups will host a forum for the Democratic candidates for the 10th district of the Kansas House of Representatives, Christina Haswood, Brandon Holland and A.J. Stevens.