Captain files to run for Douglas County Sheriff in 2020 election 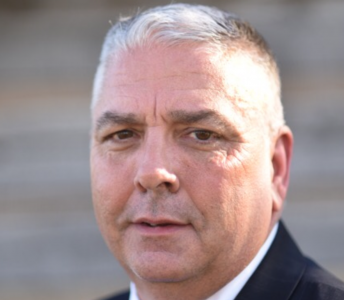 A 33-year veteran of the Douglas County Sheriff’s Office is the fourth employee of the office to join the race to become its next leader.

Doug Woods, the office’s operations division administrative captain, announced his candidacy for the sheriff position in a news release on Tuesday. He told the Journal-World he is filing to run as a Democrat.

Woods, 52, was born and raised in Lawrence and continues to reside in town. He graduated from Lawrence High School in 1986 and began his law enforcement career in 1987 as a corrections officer for the Douglas County Jail. In his current position, Woods supervises several departments of the sheriff’s office, including its investigations, court security, warrants, internal affairs and civil process departments, according to the news release.

If elected, Woods said he would focus on ensuring access to mental health services and drug and alcohol counseling for individuals housed in the county’s jail. He also said he would work to ensure the county’s reentry program provides “the best opportunities for those transitioning back into our community,” among other initiatives.

Current Sheriff Ken McGovern, 60, announced in June that he would retire after his current term expires. He was first elected to the position as a Republican in 2004, the Journal-World has reported.

Woods is also the fourth Democrat to throw his hat into the ring. The others who have filed so far are Undersheriff Gary Bunting, of Lawrence; Lt. Jay Armbrister, of Baldwin City; and Dale Flory, a member of the Underwater Search and Recovery Team who lives in the southern part of the county.

The candidate filing and withdrawal deadline for the 2020 election is June 1, according to information on the county clerk’s website, douglascountyelections.com. The primary election is scheduled for Aug. 4.