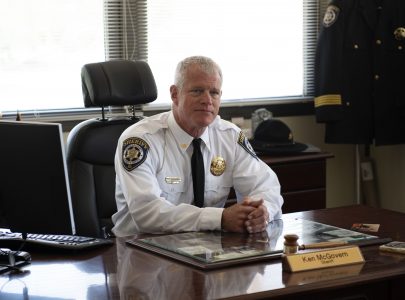 Douglas County Sheriff Ken McGovern will soon retire after 39 years with the sheriff's office. He is pictured in his office on June 12, 2020.

When one cabinet door closes, another opens.

That may not be exactly how the old adage goes, but it is how Douglas County Sheriff Ken McGovern embarked on a long career in law enforcement that is now winding to a close.

McGovern had been working for a cabinet company that closed in March of 1982. Then-Sheriff Rex Johnson had an opening in the department, and McGovern took it.

“I told myself early in that when I quit having fun with what I was doing, it was time to get out,” McGovern said, “so obviously it’s been fun for 39 years. It’s had its ups and downs, but overall, I’ve enjoyed what I’ve done and enjoyed the people I’ve worked with, and still enjoy the community and the people that I get to meet.”

McGovern announced a year ago that he wouldn’t run again after the end of his fourth term. However, at that time he had planned to stay in the position until someone new was elected.

Plans have changed. He said he’d maxed out the state retirement system at 36 years, and he recently realized that “this is when it was the best time for me and my family — that it’s time to step aside.” But he said he has “great people” who will help make the transition easy. 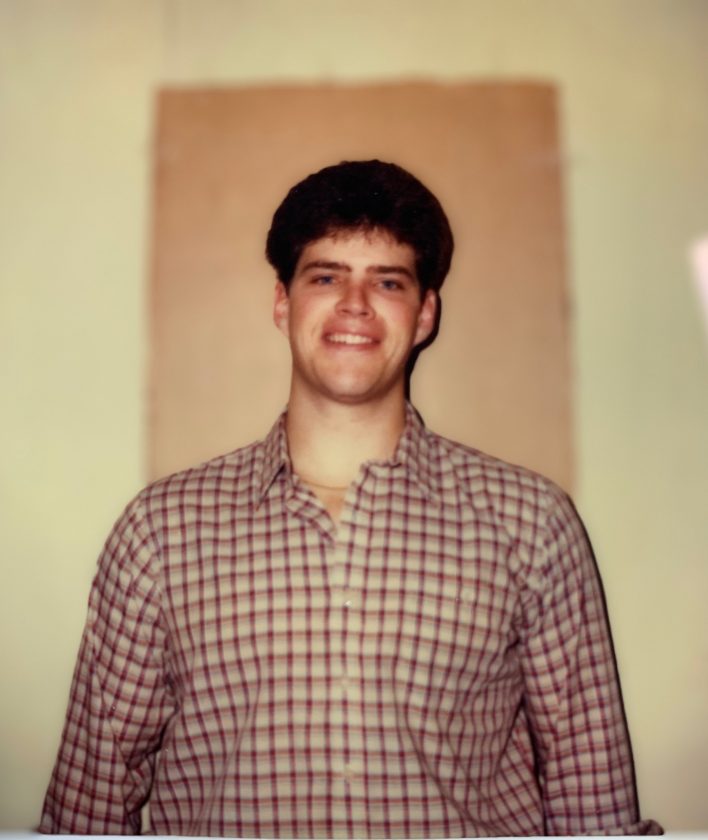 Ken McGovern is pictured in this contributed photo from 1982, the year he joined the Douglas County Sheriff’s Office.

Steve Buchholz, a captain with the sheriff’s office, was recently promoted to undersheriff. By state statute, he will serve as interim sheriff once McGovern’s retirement takes effect June 27. McGovern said he was not sure if the Douglas County Republican Party would appoint a successor to recommend to the governor’s office. The Journal-World was unable to reach party chair Ronald Thacker on Friday.

Among the biggest changes to the way law enforcement operates in the nearly four decades since McGovern signed on is technology: in-car computers, body cameras and such. But there are other things the department still tries to “instill in our people,” he said. He said the technology is part of the work, but it’s still about stopping and talking to people — “not just because the call is there,” he said.

“It’s more getting out and getting people to know you, and that’s what we continue to urge our folks (to do) when they’re out and about,” he said. “They’ve got to know who you are and what you’re about.”

As one of his employees noted, McGovern is not one to boast about his accomplishments, even though he’s been “such an integral part of so many things that have moved us forward,” Capt. Wes Houk said.

Houk joined the sheriff’s office as a deputy in 1997, with McGovern as his supervisor. Asked what some of the sheriff’s most noteworthy accomplishments were and what’s been most meaningful to the department, Houk said it’s not necessarily the things you can see on paper, or the measurable impacts — it’s the things you don’t see, “and the modesty in which he carries it.”

“He’s always been a family-first man, and what I mean by that is he’s always made sure not his family’s first, but we, as family, made sure our families were first,” Houk said. “He’s very caring.” 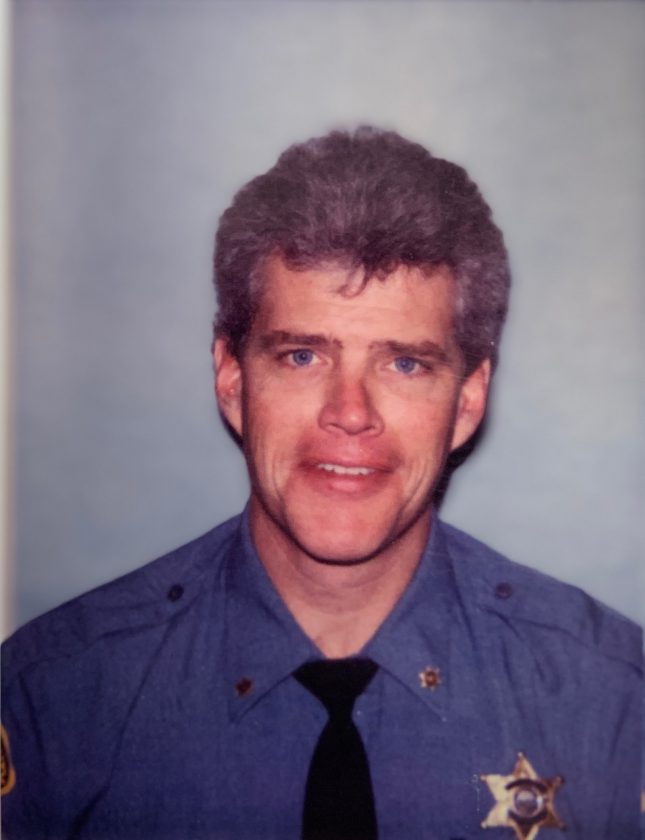 Ken McGovern is pictured in uniform for the Douglas County Sheriff’s Office in this contributed photo from 1997.

Houk did note, though, that McGovern has been a big part of moving the Douglas County Correctional Facility’s reentry programs forward, and he’s kept the department up-to-date and current with technology. McGovern has also demonstrated that he sees the need for first responders to both understand the mental health of those they serve as well as to care for their own mental health.

The Douglas County Commission appointed McGovern to the board of directors for Bert Nash Community Mental Health Center shortly after he was first elected in 2004. In the time since, he’s seen how Bert Nash can help law enforcement and vice versa.

“That’s where I find great value — that we were able to help Bert Nash and Bert Nash was also being able to help in our community, both out and about countywide, but also in our jail,” McGovern said.

During his time as sheriff, McGovern said the department has tried to figure out programs that would help people who were leaving the correctional facility. It required building partnerships with other agencies in hopes that those who left the jail wouldn’t come back.

“People are going to fail, but how do we get them back up and get them going again?” he said. 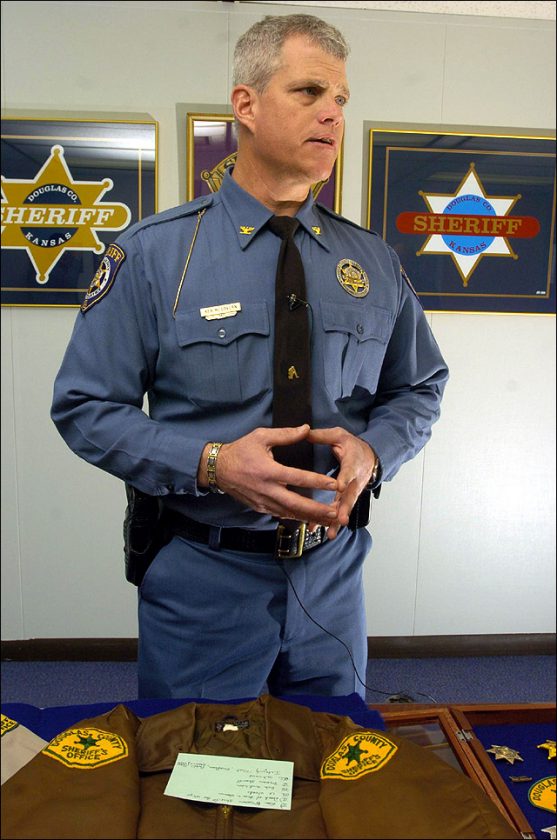 In this file photo from December 2005, Douglas County Sheriff Ken McGovern displays items as part of the sheriff’s office’s 150th anniversary. Officers were wearing new badges and shoulder patches to recognize the occasion.

He said it started a little bit at a time, looking at job programs and services. As time went on, the programs continued to grow, and staff began to research other programs across the country; soon, Douglas County was sharing its programs’ successes with other counties.

But supporting first responders’ mental health has been another focus for McGovern over the years. He’s sought money and resources to launch officer peer support groups within the agency. In addition, support that began with one volunteer chaplain in 2009 has grown into a full-time first responder assistance coordinator and six additional volunteer chaplains.

“Sheriff McGovern had a vision and was very instrumental in the chaplaincy program as it is today,” then-Sgt. Kristen Channel, now a lieutenant, told the Journal-World in 2018. “He had the foresight to realize the need was growing and we needed to grow the chaplain corps.”

As another recent example, McGovern brought a new resource to first responders countywide last year — a smartphone app full of resources, customizable and created specifically for all types of first responders, including law enforcement, fire-medical personnel and dispatch, as well as their family members.

“One of the biggest fears of law enforcement is an officer suicide, and you don’t want to see those happen,” he said. “But there are so many traumas that go on. How can we help these officers and their families deal with it?”

His staff has taken notice: “The best thing about him is that he’s always been there for us,” Houk said. 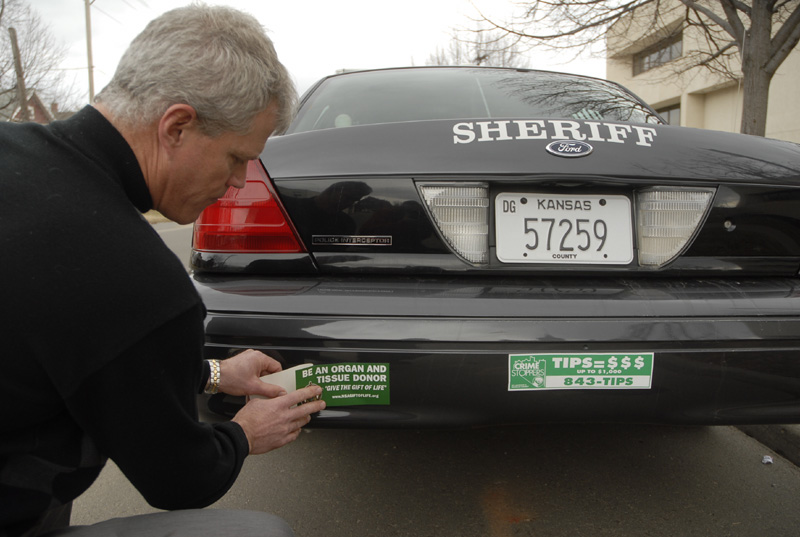 McGovern has also had a hand in getting the county’s Criminal Justice Coordinating Council to where it is today, giving input to since-retired County Administrator Craig Weinaug about which players need to be at the table at the right time. Now he thinks the groundwork is done and the CJCC has a solid foundation for the right people to share their ideas and visions, “and then for the group to come together and make good decisions on where we go with it.”

As president of the Kansas Sheriffs Association, McGovern has testified for the Kansas Legislature on behalf of sheriffs from across the state who couldn’t attend themselves. He also sat on a subcommittee that helped craft a DUI statute change a few years ago, and he’s testified on retirement issues for corrections officers, he said.

He also launched the department’s Citizens Academy, which allows participants to get an in-depth firsthand view of how law enforcement works over the course of a seven-week program.

Asked for his advice to law enforcement and the leadership that will take the reins in the future, McGovern said, “I couldn’t have done all that without hiring great people and trusting that they’re out there to do the right things. And we continue to encourage our officers — you’ve got to do the right things, and that’s what we expect.”

“Count on those around you, and do the right things,” he said. 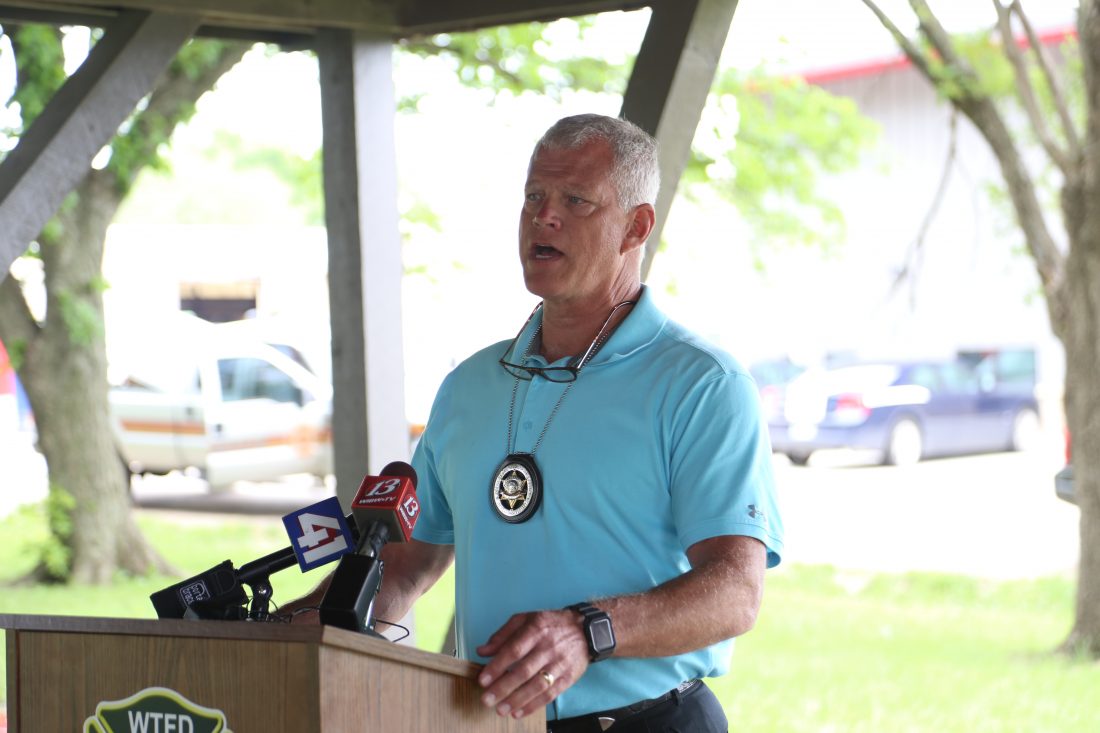 In this file photo from May 29, 2019, Douglas County Sheriff Ken McGovern shares information about the tornado that struck near Lawrence, during a news conference at Broken Arrow Park.

McGovern joked that in retirement he’s going to “get a real job.” He said he doesn’t have any firm plans yet, but his three kids and five grandkids are close, so he’s going to spend time with his family.

McGovern said when he first started, he never saw himself becoming sheriff. But he takes pride in the sheriff’s office and “who we are in our community.”

“These folks are in it, and they love what they do and love why they’re doing it,” McGovern said. “I take pride in taking over from Sheriff Johnson and building on what he’s built, and I expect the next person to come in to continue to build off what we’ve been given and what we’re handing off, and making the community proud of the sheriff’s office.”

Houk said he hates to see McGovern go, but that the sheriff has certainly earned his retirement.

“He’s served, he’s served well, he’s done it for 39 years,” Houk said, “and the sacrifices that he’s made throughout his life to serve the people of Douglas County and that in which he helped so many in our organization and outside our organization — it’s very well deserved.”