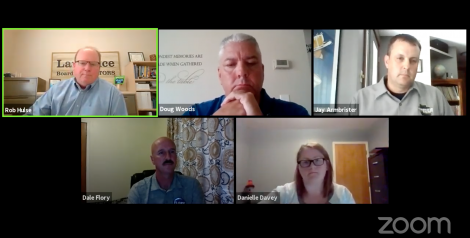 None of the three candidates for Douglas County sheriff spoke firmly in favor of expanding the Douglas County Jail during an online forum Thursday afternoon, and one said he opposes it.

Rob Hulse, executive vice president of the Lawrence Board of Realtors, and Danielle Davey, governmental affairs director for the board, moderated the forum.

In the order that they filed, Democratic candidates Lt. Jay Armbrister, Deputy Dale Flory and Capt. Doug Woods have all been with the Douglas County Sheriff’s Office for the entirety of their law enforcement careers. The next sheriff will likely be decided in the Aug. 4 primary, as no Republicans have filed for the seat.

The forum kicked off with a question about plans to expand the Douglas County Jail, which in recent weeks have seen new discussion. Due to technical difficulties, that question was cut off from the beginning of the online recording but was asked of candidates again toward the end of the forum.

All three candidates acknowledged that the decision of whether to expand the jail is not the decision of the sheriff, but instead lies with the Douglas County Commission. The next sheriff will have to figure out how to staff an expanded jail, and staffing has already been an issue.

Flory said he doesn’t think the jail expansion would benefit the community, and that he applauds the County Commission for revisiting those plans.

“I think our focus should be shifted to fully exploring alternatives to incarceration,” he said, naming initiatives such as enhanced or expanded probation, drug court, pretrial release, mental health court and the county’s behavioral health campus. “… We need to give those programs a chance to work and come up with sustainable long-term goals.”

Woods said he doesn’t really have a position on the jail, but that the office is required to provide a safe and secure environment for the inmates as well as the people who work there. The sheriff doesn’t get to choose who’s arrested, what their bond will be or what their sentences will be, he said.

Armbrister said he feels like the tide is turning and the jail expansion is probably not going to happen. He said the county needs help from the state in adding another division and judge in Douglas County District Court. He also said he thinks bail reform is an issue that’s hardly been addressed.

“We’re keeping people who are too poor to get out of jail,” he said.

Davey asked the candidates how current issues — violence, protests, navigating race and ideas of defunding the police — concern them, and how it would influence them as leader of the sheriff’s office.

Armbrister said the current state has presented the opportunity to make long-overdue changes to the entire system, in which social problems become police problems.

“Let’s not call it ‘defunding the police;’ let’s call it ‘refunding social programs,'” Armbrister said, suggesting putting money into housing, mental health, social services and drug programs and “kill this failed war against drugs stuff, because it has absolutely put us in the predicament we’re in.”

Woods said he knows systemic racism exists, and that’s what concerns him most. He said 90% of police are doing the right things, and the small percentage is making it difficult for the others to do their jobs, but he wants to increase training against bias-based policing.

“That’s where I really want to work at it,” he said, “getting our officers and our deputies to understand what’s going on, and that we treat everybody with dignity and respect.”

Flory said he would want his undersheriff, Lt. Clark Rials, to spearhead a social justice committee to facilitate an open dialogue between all parties.

“As a person who deeply cares about humanity, I will not hesitate to act on matters that are unjust, unlawful and create a greater divide in the relationships that we are trying to build,” Flory said.

Davey also asked the candidates what they would do to end corruption within the sheriff’s office.

Armbrister said they’re not in a profession where they can have any bad apples. Any corruption or accusations of criminal activity needs to be investigated by an outside agency, he said.

Flory said he believes the community has a right to know when substantiated complaints are made against law enforcement, and he hopes anyone who witnesses misconduct will report it, either to the office’s internal affairs or to the state attorney general’s office.

Woods said he would want to hire someone from outside the county to serve as a professional standards unit and “aggressively investigate” all complaints. If an employee needs to be terminated, he would, and then submit that person’s name to the state Commission on Peace Officers’ Standards and Training, which would determine if that person could work in law enforcement again.

All three candidates said they would support the creation of an LGBTQ liaison position.

The full forum video can be found online by searching YouTube for “Lawrence Board of Realtors.”

— Editor’s note: The YouTube video and link in this article were updated at 3:45 p.m. Friday.