In city survey, about half of respondents support a ban on disposable plastic bags in Lawrence 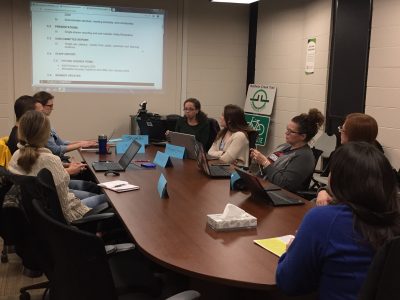 Lawrence-Douglas County Sustainability Director Jasmin Moore, corner right, presents results from a public survey about disposable bags to the Sustainability Advisory Board as part of its meeting Dec. 11, 2019.

Just over half of respondents to a city survey about potential ordinances regarding disposable plastic and paper bags indicated they favored banning plastic bags, a city advisory panel learned Wednesday.

Lawrence-Douglas County Sustainability Director Jasmin Moore presented results from the survey to the Sustainability Advisory Board as part of its regular meeting. Moore said more than 600 people completed the survey and that the results, along with some demographic data provided by respondents, would be forwarded to the Lawrence City Commission.

“In general, this is good information to have so the City Commission can be aware of at least what 600-plus people feel about this issue,” Moore said.

As part of the public feedback process, the city also collected comments from residents via email and at public meetings. Moore said those comments would be provided to the commission along with the survey results.

The board originally recommended that the city charge a 16-cent fee for single-use plastic and paper bags, but it later updated that recommendation to indicate it would also support a ban, as the Journal-World reported. Originally, the board wanted the city to collect the proceeds from the fee, but it determined that option was not feasible due to legal issues and that if a fee would be charged it would be retained by the business.

Board members Michael Steinle and Rachel Krause said the board ought to support a policy that reduces overall resource use the most. Krause said the board’s research had determined that two methods in particular would have the greatest impact: a fee on both kinds of single-use bags, or a ban on plastic and a fee on paper.

“My concern about simply a ban on plastic is that’s simply going to shift consumption, and I don’t think that’s going to actually end up being a better result,” Krause said. “We’ll get a different result, but not a better one.”

Moore said that the topic will go to the City Commission for discussion sometime in January.

• Nov. 22 — Lawrence residents share opinions on proposals to ban or charge for plastic and paper bags