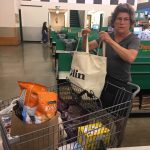 Robin Byer brought along her own reusable canvas bags to grocery shop at Checkers Foods on Friday, June 28, 2019. However, she purchased so many groceries she also needed to use the store's bags. Lawrence's Sustainability Advisory Board is recommending a 16 cent fee for all single-use paper and plastic bags in stores.

“It’s so hard to remember all the time,” she said about bringing the bags from her car into the store. “There is a learning curve for everything.”

Byer was one of several Lawrence grocery shoppers the Journal-World spoke with Friday regarding their thoughts on the recent recommendation by Lawrence’s Sustainability Advisory Board for a city ordinance to impose a 16-cent fee for each single-use plastic and paper bag used at local stores.

While Byer had brought her own bags, she had purchased so many groceries that she ran out of space. She packed the rest of the groceries in the store’s currently free paper bags.

As Ron Kraus was loading up his groceries in single-use bags at Checkers, he said he understood why the city needed to begin charging for the bags to help the environment. He thought it might force more shoppers to begin bringing their own reusable bags. 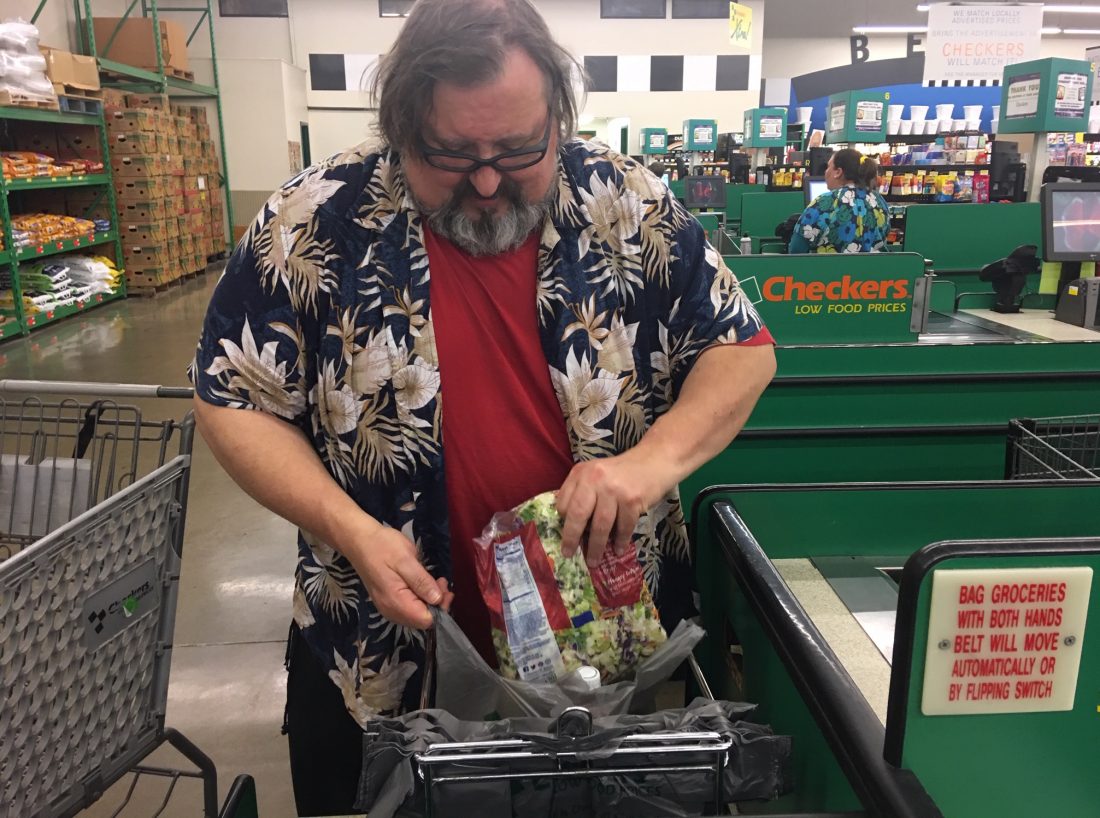 Ron Kraus packs his groceries into a single-use plastic bag at Checkers Foods, 2300 Louisiana St., June 28, 2019. Lawrence’s Sustainability Advisory Board is recommending a 16 cent fee for all single-use paper and plastic bags.

If the city does begin charging 16 cents, Kraus said he would be more inclined to get reusable bags.

Generally, he uses four plastic bags for his weekly trip to the grocery store, which would tack on 64 cents to his grocery bill.

At another checkout lane, Joni Fornelli was packing her groceries into a single brown paper bag. Usually she brings her own bags, except when she wants a paper bag to line a trash can. 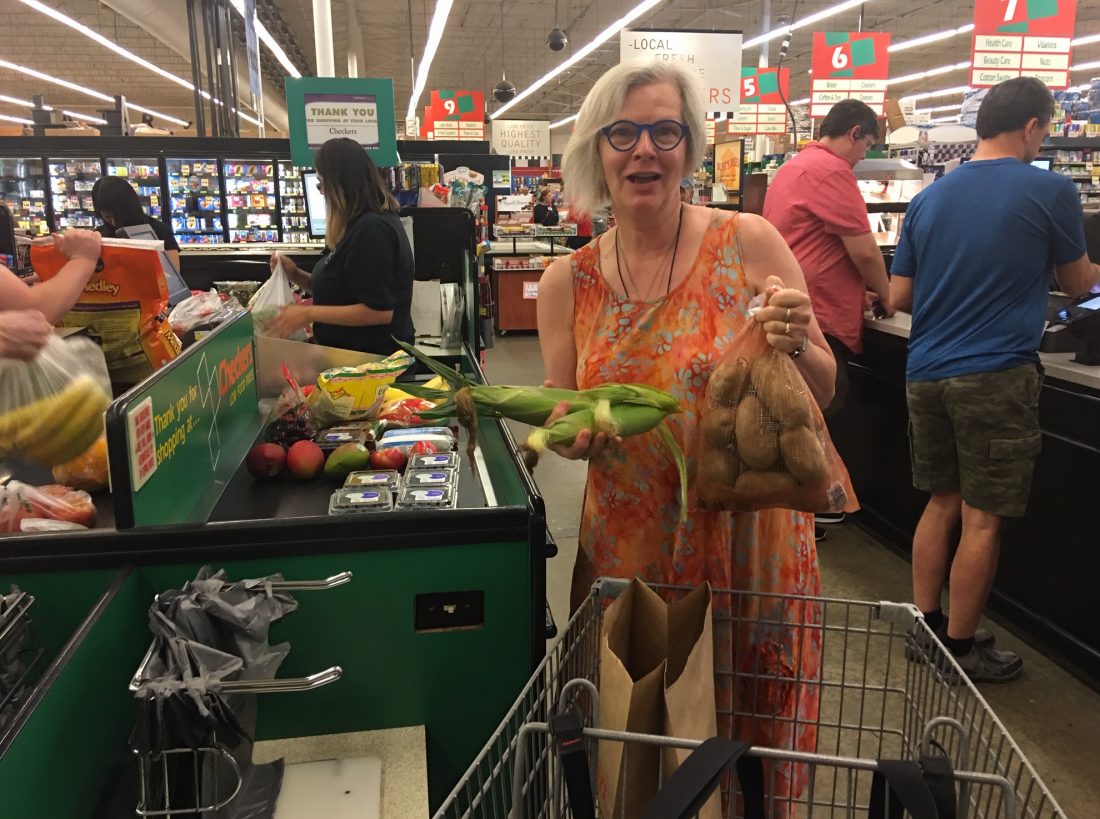 Joni Fornelli packs her groceries into a single brown paper bag at Checkers Foods, 2300 Louisiana St. Lawrence’s Sustainability Advisory Board is recommending a 16 cent fee for all single-use paper and plastic bags in stores.

However, she said she would be happy to just rely on reusable bags instead.

“Sixteen cents is a great incentive,” Fornelli said. “Every choice we make has an effect on the planet. In 2050 there will be more plastic bags in the ocean than fish.”

Outside of Checkers, at 2300 Louisiana St., Breanne Russell, of Ozawkie, was recycling at the big bins in the parking lot. She wasn’t a fan of adding a 16-cent charge to plastic or paper bags. 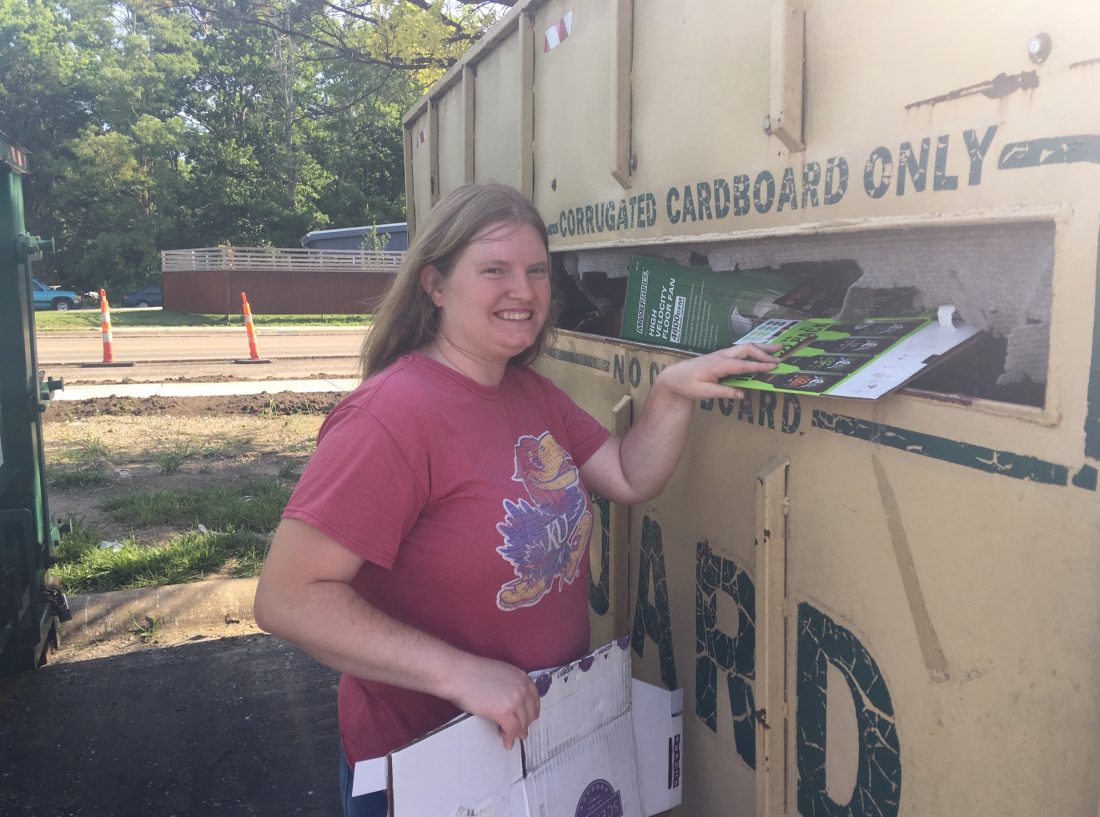 Breanne Russell, Ozawkie, recycles at the big pins in the parking lot at Checkers Foods, 2300 Louisiana St. She said a 16 cent charge to use single-use plastic or paper bags in stores in Lawrence was too high.

“That’s really high. Maybe it should be 5 cents?” Russell said. “It’s always in my head to buy reusable bags and leave them in my car. I have so many plastic bags. We use them for doggie bags.”

Karyl Graves was loading up plastic bags of groceries in the back of her SUV in the Checkers parking lot. She has multiple uses for single-use bags.

“I use them for trash and storing things,” Graves said.

She would prefer the 16-cent fee to an outright ban on single-use plastic and paper, but she didn’t like the idea of another charge being added to her expenses.

“Every time we turn around we are being taxed,” Graves said.

Charles Jones was leaving The Merc, 901 Iowa St., with no shopping bags. He was carrying his purchases in both hands.

“We have to do something about caring for our planet,” Jones said. Then he added, “The real truth is my wife gets mad if I bring home bags.”

“Many shoppers use boxes from our box corral, and there are folks who use reusable bags,” Hamlin said. “It’s still a choice.”

He said the store didn’t want its customers to feel pressured toward the reusable bags.

“It’s not a judgment thing,” Hamlin said. “We applaud the choice to be more mindful, but we don’t force it.”

The store uses clear plastic bags for produce and paper for everything else. It also sells multi-use bags and market baskets.

Jaime Nickel had forgotten her reusable bags and ended up putting her groceries in recycled boxes from the box corral at the front of The Merc. The idea of being charged 16 cents for a grocery bag didn’t bother her.

“We have been in states where all bags are banned and people just become accustomed to it,” Nickel said.

At Dillons’ corporate offices, in Hutchinson, Sheila Lowrie, corporate affairs manager, said Dillons stores were on board with the growing concerns regarding single-use plastic bags and had a plan to phase out plastic bags in favor of reusable options by 2025 throughout the Kroger companies.

“It’s a bold move and a positive step ahead,” Lowrie said. “We also know this transition to reusable bags requires education and reminders to encourage consumers to adopt a new way to shop.”

A representative with Hy-Vee corporate offices said the company was monitoring the discussion with the Sustainability Advisory Board. Its stores had locations in the lobbies for recycling plastics from any retailers, said Tina Potthoff, senior vice president of communications. The company is working on initiatives to expand the selection and sales of reusable bags in its stores to encourage customers to use fewer single-use plastic bags. Potthoff added that Hy-Vee worked closely with a company that recycles the plastic into benches and playground equipment.

The Sustainability Advisory Board voted last summer to make the issue of single-use plastics one of its priorities.

The Journal-World has reported that based on national estimates of per-capita plastic bag use, it’s estimated that Lawrence residents use at least 30 million plastic shopping bags annually. In addition to the waste associated with the bags themselves, bags that end up in streams, rivers and oceans cause pollution and threaten wildlife.

Revenue from the bag fee would be allocated to address the business costs associated with the policy; to support local environmental education and initiatives; and to support programming for low-income Lawrence residents, according to the Sustainability Advisory Board’s recommendation.

The board plans to consider the recommendation for the bag fee at a special meeting at 5 p.m. Tuesday in the Flory Building at the Douglas County Fairgrounds, 2120 Harper St.

After the board votes on the recommendation, it will be forwarded to the Lawrence City Commission for possible action.