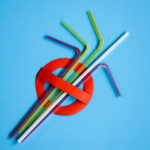 A local committee is doing research on a potential ban on plastic straws, bags and other kinds of disposable plastic items in Lawrence.

A local committee considering a city ordinance to reduce the amount of disposable plastic products used in Lawrence is coordinating outside research and focus groups to inform its decision.

The city’s Sustainability Advisory Board voted in July to make the issue of single-use plastics one of its priorities. Lawrence-Douglas County Sustainability Director Jasmin Moore said after that decision, there was a lot of public interest and some concerns.

“A lot of people have made contact and expressed interest in being a part of that conversation,” said Moore, who is the board’s staff liaison. “And so the group intends to make sure that different types of stakeholders are included in that process.”

A committee was formed this summer to consider a potential ban and other ways to reduce the use of single-use plastics, and Moore said the committee chair, Michael Steinle, will be recruiting members of the public for focus groups that address different concerns and considerations. She said some of the topics addressed will be the business, environmental, social and equity impacts of a ban, and that stakeholders in each of those areas would be asked for their input.

In addition to considering a ban, Moore has that said the committee will consider strategies such as fees for single-use plastics and an incentive program for businesses that move away from single-use plastics. As far as which plastics will be discouraged, Moore said that right now the primary conversation has been about plastics that cannot be processed by the city’s single-stream recycling system, including plastic bags of any sort, straws and plastic to-go food containers.

Moore said the committee has also engaged with a group of graduate students at the University of Kansas School of Public Affairs & Administration to do research on a potential city policy related to plastics. She said the researchers will look into the impact of different kinds of disposable plastics, the effectiveness of existing policies and the impact such policies can have on business, industry and others.

Moore also said that as the KU research progresses, it could identify more groups of stakeholders that the committee would want to talk to.

“The goal is to really present realistic and effective recommendations,” Moore said. “And so, the group is conscious about not wanting to just put a policy out there that is not realistic to implement or would be harmful in any way to different constituencies.”

The committee will also be answering a list of questions that the board uses to approach potential policies related to sustainability, including data regarding the current local conditions, models of best practices, financial implications and impacts on residents. Moore said the committee will be working with environmental groups to determine the local environmental impact of disposable plastics.