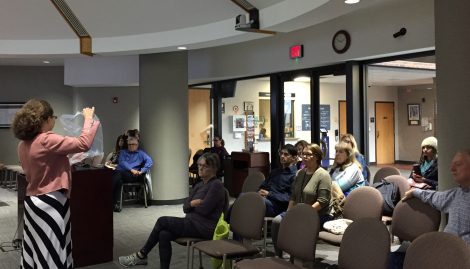 Lawrence-Douglas County Sustainability Director Jasmin Moore holds up a plastic bag during a meeting Friday, Nov. 22, 2019, to gather public input about proposals to ban or charge a fee for plastic and paper disposable bags.

At a meeting to gather public input on proposals regarding single-use bags, city officials heard concerns about both the environment and the effect a ban or fee on bags could have on businesses.

About 20 people attended a community meeting at City Hall Friday morning, and another meeting was scheduled for 5 p.m. Friday at the Union Pacific Depot, 402 N. Second St. Opinions were mixed as to whether the city should ban or charge a fee for single-use plastic and paper bags, and some said they would prefer that the city be able to retain that fee to help provide reusable bags and other programming, as the Sustainability Advisory Board originally proposed.

Lawrence-Douglas County Sustainability Director Jasmin Moore showed attendees several different single-use plastic bags, saying that there has not yet been detailed discussions about what types of bags a ban or fee would apply to. She said the board generally said the ban or fee should apply to retail or commercial businesses.

“The specifics of that will need to be laid out, so that we know exactly what that means,” Moore said. “Does it mean the newspaper? Does it mean when you take your food to go at a restaurant? Does it mean just grocery stores? Those details will have to be determined.”

The board originally recommended that the city charge a 16-cent fee for single-use plastic and paper bags, but later updated that recommendation to indicate it would also support a ban, as the Journal-World recently reported. The board originally proposed that the city collect the proceeds from the fee but determined that option was not feasible and that if a fee would be charged it would be retained by the business.

Lawrence resident Dan Cady said he thought people should be free to decide what they wanted to do. He said that before the city began its recycling program, he already chose to recycle using a private company, and that he’d prefer to make those choices himself.

Cady said he thought people should be allowed to use plastic bags, which he said were convenient for shoppers and businesses. He voiced concern that banning plastic bags could mean people working for plastic bag companies could lose their jobs, including jobs in Kansas. He also said some studies have shown that people didn’t usually wash their reusable bags and that such bags could serve as a breeding ground for food-borne bacteria.

Lawrence resident Terri Wilke said good reasons existed to discourage use of both single-use paper and plastic bags and that the solution was to carry reusable bags to the store. She noted that both plastic and paper bags require natural resources to create and that plastic bags in particular take many years to decompose.

“They are a pollution problem,” Wilke said. “They’re made from petroleum, a finite resource that causes pollution in its extraction, and when they are trash they don’t break down; they clog water systems, they float around in the air.”

Other attendees shared similar concerns, with one woman, Marilyn Pilkey, saying she had already sewn hundreds of reusable cloth bags that she gives away and she would be willing to donate her time to help create bags for people who need them if the city were to approve a ban or fee.

Lawrence resident Adam Ritchie, who was formerly a member of the board, said he was in favor of a fee. Lawrence would be the first city in Kansas to ban single-use bags, and Ritchie voiced concern that the Legislature could decide to bar cities from imposing such bans. He also said he would like to see the city find a way to collect the fee so it could be used to support sustainability efforts.

Lawrence resident Brian Sloop said he was opposed to making businesses charge a fee for single-use bags. Sloop said charging for bags would slow down the checkout process and that it makes merchants the “bad guys.” He said if the fee created animosity, it would be the merchant’s relationship with the customer that suffered.

The Lawrence City Commission has indicated it is interested in either a fee or a ban on single-use bags. Moore told attendees that all their comments would be collected and made available to the City Commission when the issue comes before that body.

Those unable to attend either public meeting can fill out an online survey, which is available on the Lawrence Listens website, lawrenceks.org/lawrence-listens. Residents can also send any comments via email to sustainability@lawrenceks.org.