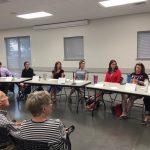 Lawrence's Sustainability Advisory Board meets Tuesday, July 2, 2019, at the Douglas County Fairgrounds to discuss a plan to impose a 16-cent fee for disposable plastic and paper bags used at local stores.

A proposal to impose a 16-cent fee for each disposable plastic or paper bag used at local stores will soon be headed to the Lawrence City Commission.

The city’s Sustainability Advisory Board advanced the recommendation Tuesday night during a special meeting at the Douglas County Fairgrounds, with about 30 members of the public in attendance.

The proposal would apply to all single-use plastic and paper bags except those used for raw meat, seafood and bulk items such as fruits, vegetables and nuts, the Journal-World has previously reported. The fee would cover the cost of administering the policy, but it would also be used to support local environmental initiatives and programming for low-income residents, including offering access to reusable bags.

The proposal would also require retailers who offer single-use bags to display an educational flyer, provided by the city, explaining the rationale behind the bag fee.

Board member Rachel Krause, an associate professor in KU’s School of Public Affairs and Administration, said the 16-cent amount was based on three studies that attempted to calculate the social and environmental cost of disposable bags. She and fellow committee members stressed that the initiative isn’t about increasing the city’s revenue but about helping the environment.

“The odd charge of 16 cents may catch people’s attention and open the door to educational opportunities,” board member Michael Steinle said, adding that his family of four uses around 27 single-use bags a week.

When asked by the Journal-World why paper bags were included in the proposal, Steinle said paper bags were a poor use of resources and there was a limit to the recyclability of paper.

Several Lawrence residents at the meeting thought the recommendation didn’t go far enough and instead called for a total ban on single-use bags. Others said time was of the essence to protect the environment from pollution and urged the city to act quickly to put the fee in place.

Not everyone was happy with the proposal, however. Jim Lewis, the owner of Checkers Foods, said he was afraid that low-income shoppers at his store might not be able to afford the fee. He also told the board that his store’s bags were made of 25% reusable material and had a message printed on them that asked shoppers to reuse them or return them to the store.

“Why were plastic bags first introduced? To save trees,” Lewis said.

With the Sustainability Advisory Board’s approval, the proposal will now be forwarded to the City Commission, which will make the ultimate decision on whether to impose a fee.