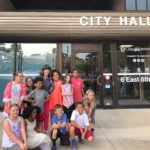 After learning about the effect of plastic bags on the environment and animals, students from Lauren Mitchell’s fourth-grade class at Kennedy Elementary School called up local leaders about their idea for a local ban. Ultimately, a group of the students gave a presentation to the City Commission at its last meeting.

The students’ class project focused on the amount of plastic pollution in the ocean and how it kills and sickens sea animals. A group of the students later told the Journal-World that although there is a lot of plastic pollution that makes its way into the ocean, either directly or through rivers and sewers, their main goal was plastic bags because of how frequently people use them.

“Because there are so many, it’s not one or two hundred plastic bags, it’s like millions,” said Justyss Smith. Justyss’ classmates, Willow Osburn and Zeb Brinson, added that people can use paper or reusable bags, or that plastic bags could cost 10 cents instead of being free.

Dozens of cities in the United States have banned or otherwise restricted the use of disposable plastic shopping bags. Plastic bag bans also have opponents that argue governments should not be enacting such restrictions on businesses.

City leaders, specifically Vice Mayor Lisa Larsen and Commissioners Jennifer Ananda and Matthew Herbert, said that a ban or restriction on plastic bags is at least worth a discussion.

Herbert said he is not sure where he stands at this point, but that he was surprised the commission has not taken up the topic previously and that he would certainly entertain the conversation.

“I think that there is absolute merit in the argument made by Kennedy Elementary School (students) and everyone else, but I think there’s also some merit in the opposition that says this is a personal choice that people have,” Herbert said.

Disposable plastic grocery bags were introduced in the United States about 40 years ago, and some reports estimate that Americans throw away billions of plastic grocery bags each year. There are bins for used plastic bags at some local grocery stores, including Hy-Vee and Dillons, but the city’s single-stream recycling service does not accept plastic bags because they clog equipment.

In explaining how the project began, Mitchell said some of the students were upset after watching a video about the effects of plastic pollution, including the danger it poses to aquatic animals. She said the next day, some of the students brought up the topic again and asked if there was something they could do. The students then began Project Plastic, which included a research group, poster group and a government outreach group, ultimately gaining them an invitation to City Hall.

Larsen, who noted she was very impressed with the activism of the students, said in a message to the Journal-World that any conversation about environmental stewardship is welcome and needed. Larsen did not specify whether she would support a ban.

The main focus of Ananda’s election campaign last year was sustainability, and Ananda said she thinks a plastic bag ban or other restrictions absolutely deserve a look from the commission. She said how such restrictions would be implemented would be a key consideration, and that she was open to discussing alternatives such as requiring biodegradable plastics or small charges for bags, as well as ways to phase in changes in order to make the transition easier for businesses.

Ananda said the students’ presentation covered all the reasons why she thinks plastic bags should be restricted.

“I think that the fourth-graders spelled out very clearly the impact that plastic bags have, not only on our community, through litter and causing our landfill to fill up more quickly, but also by clogging the world,” Ananda said.

Herbert said he personally thinks it’s really important to use reusable bags, but that he is not sure what the city’s role should be. He said the smoking ban in city parks provides some level of precedent for a plastic bag ban, but that the smoking ban is different because secondhand smoke has a direct effect on other residents. He said it is hard to argue that plastic bags have such a direct effect.

“I’m an avid reusable bag user myself, but I don’t know where the city should fall in terms of taking a forcible action like that, as opposed to just making people aware of the consequences of those choices that we make,” Herbert said.

Cities that have banned or restricted plastic bags include Boston, Chicago and Seattle, according to the National Conference of State Legislatures. California has enacted the only statewide restrictions, banning large retail stores from using single-use plastic bags and establishing a 10-cent minimum charge for recycled paper bags, reusable plastic bags and compostable bags at certain locations. Several states, such as Missouri, Indiana and Florida, have passed laws to stop local governments from banning plastic bags.

Dillons, which has four grocery stores in Lawrence, is not in favor of a ban. Dillons spokeswoman Sheila Lowrie told the Journal-World in an emailed statement that Dillons prefers to offer a choice to its customers regarding bag options, which include reusable bags, plastic and paper. Lowrie also said Dillons recycles the shrink wrap used in product delivery and has plastic barrels in the lobby of all its stores where customers can deposit used plastic bags for recycling.

Ananda said although she understands some may be opposed to a ban or other restrictions, if it is feasible for the city to do something to mitigate the environmental impacts of plastic bags, then the city would be remiss to not consider it.

“I understand that it’s an inconvenience, but it’s going to be a bigger inconvenience in the future when it’s impacting our ocean life, our food availability and our environment,” Ananda said. “Our task is not just to think about the here and now, but to also think about our future generations and how they will be impacted by the decisions that we make today.”

Whatever the outcome may be, Mitchell said she is proud of her students. She said it was awesome to see how engaged they were with the project, which she said provided her a way to teach them how to use their voices.

“I think we need to make kids feel like they can have a voice, and that they should have a say in how things are run,” Mitchell said.