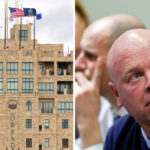 The developer of Lawrence’s Oread hotel and his bookkeeper could face up to 15 years in prison for an alleged tax scheme to defraud the city.

Thomas S. Fritzel, 52, and Keela Lam, 46, were indicted Wednesday on federal charges of scheming to collect more than $400,000 in fraudulent tax refunds from the City of Lawrence, according to a news release from the U.S. attorney’s office.

Fritzel and Lam, both of Lawrence, are each charged with one count of conspiracy to defraud the city and one count of interstate transportation of stolen funds. Also named as defendants are companies controlled by Fritzel, including Oread Construction LC, Oread Wholesale LC, Oread Inn LC and R6 LC. Fritzel and others are also facing separate federal charges, carrying up to 12 years in prison, related to alleged improper disposal of asbestos for a project at the former Alvamar Country Club.

When reached by the Journal-World, Fritzel said he didn’t know anything about the federal charges. When subsequently told that he and Lam had been charged with one count of conspiracy to defraud the city and one count of interstate transportation of stolen funds, Fritzel declined to comment, repeating that, “right now,” he didn’t know anything about the indictment and that he would need to find out more. Attorneys who have previously represented Fritzel did not immediately respond to voice messages left by the Journal-World late Wednesday afternoon.

The indictment alleges that in 2008, Fritzel signed an agreement with the City of Lawrence to develop the Oread Hotel in Lawrence, a seven-story hotel with restaurants, bars and a gift shop.

The city set up a Tax Increment Financing District and a Transportation Development District around the hotel and agreed to reimburse Fritzel for his development costs. The funds to pay Fritzel were to come from property tax and sales taxes collected inside the redevelopment district.

The indictment alleges that Fritzel and Lam conspired to defraud the city by seeking reimbursement for hundreds of transactions that were not generated within the redevelopment district. The indictment alleges the defendants fraudulently sought refunds for taxes paid on furniture and appliances, work on houses Fritzel owned in Lawrence and Colorado, landscaping materials, party tent rentals, car batteries, equipment for a car wash and other items.

A separate indictment alleges that Fritzel and others violated the requirements of the Clean Air Act for disposal of asbestos related to the Alvamar Country Club project.

According to the federal Environmental Protection Agency’s website, asbestos is a fibrous material often used as insulation and as a fire retardant. Exposure to the material can increase the risk of lung disease, which could take years to develop. The major adverse health effects connected to exposure to asbestos are lung cancer, mesothelioma and asbestosis, according to the EPA.

If convicted on all charges from both indictments, Fritzel faces up to 27 years in prison and more than $1 million in fines.

Fritzel and the City of Lawrence reached a settlement in a civil suit in 2017 regarding the tax fraud allegations. The settlement involved Fritzel entities paying the city $650,000 in damages. However, the city is still obligated to provide millions of dollars in incentives to The Oread project. According to the settlement, the hotel is still eligible to receive $8.5 million in tax refunds to reimburse the project for infrastructure expenses, and the city has the right to audit and must approve management positions at The Oread.

When asked whether he had any comment regarding the latest developments, City Manager Tom Markus said he didn’t feel it was appropriate to comment on the federal charges and that any communication should come from the U.S. attorney’s office. Regarding The Oread hotel’s ongoing incentives agreement with the city, Markus said he does think the city’s interests are adequately protected.

“I would say that we’ve strengthened those matters significantly, and I think that we have an agreement there that was designed to protect the city going forward,” Markus said.

The Journal-World began investigating allegations in 2015 that improper sales tax activity was occurring inside the special taxing district that had been created for The Oread hotel.

The newspaper received a tip that a company called Oread Wholesale LC was using a business address of 1200 Oread Ave., which is the same address as the hotel. The allegations centered on claims that Oread Wholesale, a Fritzel-controlled entity, was improperly booking sales as being made at The Oread address.

The newspaper asked the City of Lawrence for several documents related to sales tax matters at The Oread and described the allegations against the Fritzel entities. State law prohibited the city from releasing the sales tax documents, but the allegations spurred the city to hire an outside auditor to review the matter. That audit ultimately resulted in the City of Lawrence taking action against the hotel development group, which ended with the 2017 settlement. The settlement, however, did not prohibit federal prosecutors from reviewing the matter for criminal charges.

In addition to The Oread deal, Fritzel also has multiple partnerships with Kansas Athletics. The Rock Chalk Park sports complex that houses KU’s track and field stadium, soccer field and softball facilities is owned by a for-profit company controlled by Fritzel. KU leases the facilities from the Fritzel entity as part of a public-private partnership that also involved more than $12 million in financial incentives from the City of Lawrence.

Have a tip or story idea?

• Recent news about the City of Lawrence

● May 10, 2017 — Judge officially dismisses city’s lawsuit against The Oread in wake of settlement

● March 6, 2017 — After 10 hours of mediation and executive session, no public update in city’s lawsuit against The Oread hotel

● Jan. 6, 2016 — City mum on action against Oread Inn, waiting on last deadline to comply with demands