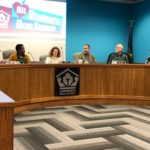 Lawrence school board members listen to a report from Board President Jessica Beeson, second from left, at their meeting on Monday, Jan. 14, 2019 at district offices, 110 McDonald Drive. The others, left to right, are Superintendent Anthony Lewis; board Vice President Melissa Johnson; and board members Jill Fincher, GR Gordon-Ross, Rick Ingram, Kelly Jones and Shannon Kimball.

Three of four incumbent members of the Lawrence school board whose terms are expiring will not run for reelection this year.

The four-year terms of Board President Jessica Beeson and board members Jill Fincher, Rick Ingram and Shannon Kimball will end in January. Kimball, the only incumbent who filed for reelection, is seeking her third term.

Reached via email May 23, Beeson told the Journal-World that she wasn’t running again but that it had been a great four years.

“I’ve enjoyed serving the district and making it stronger for all of our kids,” Beeson wrote. “I’m excited we have such a fabulous pool of candidates to join the board and continue moving the district forward.”

Ingram told the Journal-World via email on June 1, two days prior to Monday’s filing deadline, that he had been “in the process of making a decision” but that he would not run again.

“After 8 years I think it is really important that we get some new perspectives on the board,” he said via email.

Fincher did not respond to an email inquiry from the Journal-World, but she did not file for reelection.

The four candidates seeking their first terms on the school board are Carole Cadue-Blackwood, Thea Perry, Paula Smith and Erica Hill. A primary election would only have been necessary if 12 or more candidates had filed for the four seats.

Seven at-large Lawrence school board members serve four-year terms and receive no salary. The terms of the three other incumbents — Melissa Johnson, Kelly Jones and GR Gordon-Ross — expire in 2021.

More information about voting, including where to go to vote and how to request a mail-in ballot, is available on the Douglas County clerk’s Voting and Elections website at douglascountyelections.com.