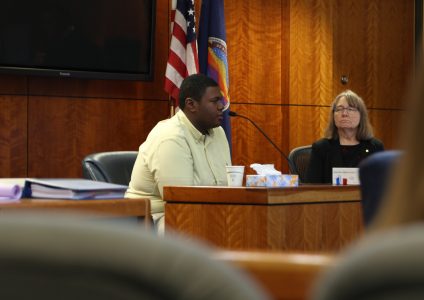 Jordan K. Ross, center, of Topeka, testifies during his trial in Douglas County District Court on Friday, Nov. 1, 2019. Ross is accused of raping a 15-year-old Lawrence girl at a house party in August 2017. The woman on the right is the court reporter.

A Topeka man accused of rape testified in Douglas County District Court on Friday that he never had sex with the alleged victim.

Instead, Jordan K. Ross said, the girl manually stimulated him to the point of ejaculation.

However, Ross’ testimony did not match up with the version of events he provided in previous evidence admitted to the court. In fact, prosecutor Alice Walker told the jury during her closing arguments that it was the third different story Ross had provided.

Ross, now 22, is accused of raping the 15-year-old girl at a Lawrence house party in August 2017, when he was 19. He is standing trial on a charge of rape by force or fear in connection with the alleged incident. In the alternative, he is charged with aggravated indecent liberties with a child.

Walker argued that Ross was inconsistent when remembering the incident, and when pressed on the details of his story, he struggled to answer directly, or he provided more contradictions.

“We now have a third statement from the defendant about what happened,” Walker said, referring to testimony Ross provided Friday. “Even in his testimonies there were inconsistencies in what he was saying.”

Earlier in the trial, the jury listened to two recordings of Ross discussing the incident. In the first recording, he told the alleged victim on the phone that nothing happened between them and they did not have sex. In the second recording, he told police investigators about a month after the house party that “sex happened” and the girl was a willing participant.

But in court on Friday, explaining a third version of events, Ross said he went into a bedroom at the house party and found the girl on the bed kissing other people. He then entered the room and the other people left except for the girl and him, which then resulted in her manually stimulating him. He said he ejaculated on to her underwear.

He also said the information he told police was not accurate, saying he felt “under pressure” when they began asking about the incident. However, Walker noted that Ross was the first person to mention rape when they began talking to him.

Although Ross said during his testimony he did not know the girl was accusing him of rape, he told the police that he “didn’t need a rape charge” when they asked to speak to him about an “incident in Lawrence.” 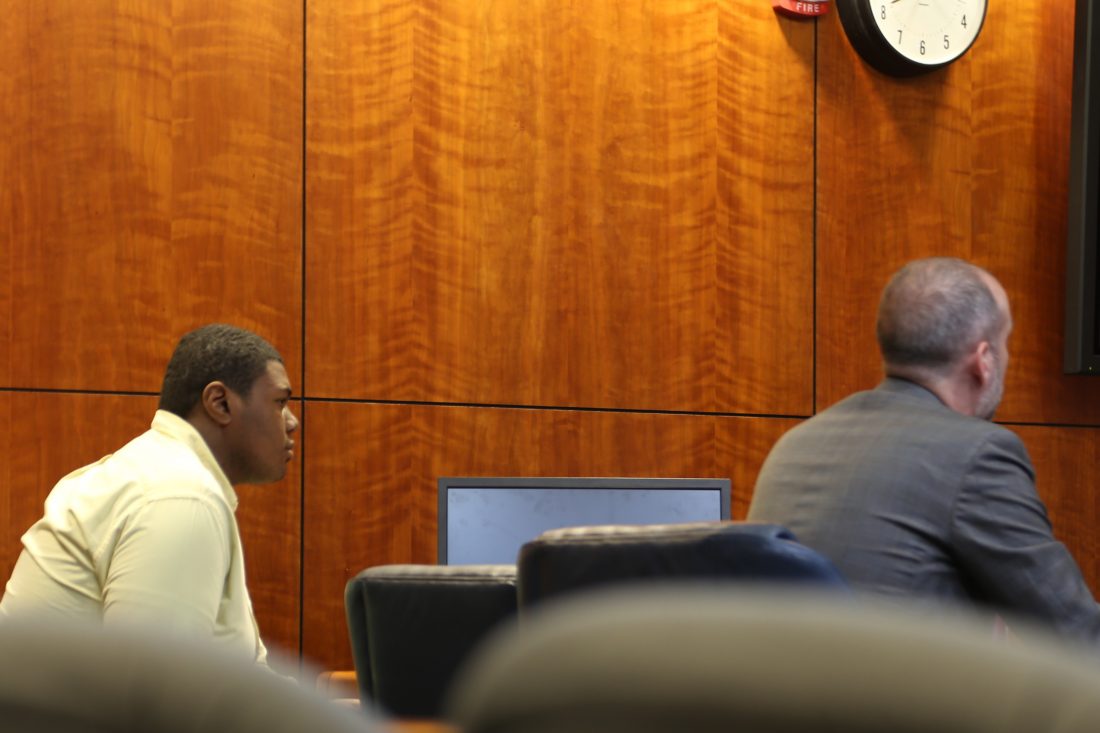 Jordan K. Ross, left, sits in Douglas County District Court with his attorney Cooper Overstreet, right, on Friday, Nov. 1, 2019. Ross is facing a trial for a charge of rape in connection to an incident that occurred at a Lawrence house party in August 2017.

Walker said during her closing arguments that Ross’s continued inconsistencies are in contrast to the testiomony and evidence provided by the alleged victim, who told police, a sexual assault examiner at the hosptial and the jury the same story every time.

The girl previously testified that she went up to the room with friends to hang out but woke up in the bed to a dark room and Ross on top of her. She said she told Ross no, but he continued by pulling down her pants and then raping her. She said she was crying and screaming and could hear people banging on the door to check on her.

In the defense’s closing argument, Sarah Swain, an attorney for Ross, asked the jury to consider Occam’s Razor, meaning the simplest explanation for the incident is likely the correct one. Swain argued the simplest explanation of the circumstances in the case is that Ross never had sex with the girl but she had caused him to ejaculate on her underwear.

Additionally, noting the Kansas Bureau of Investigation did not test evidence swabs of the girl’s vagina, Swain said that investigators did not collect enough evidence to prove beyond a reasonable doubt that Ross had sex with the girl.

Swain said the burden of proof in the case lies with the state prosecutor, and because the KBI did not test swabs from the girl’s body that were collected during the sexual assault exam at the hospital, the state does not have sufficient evidence.

“Where is the evidence that the state has produced that my client’s penis was ever in the vagina of the girl?” Swain said, suggesting there wasn’t any.

After closing arguments, the jury began deliberating at 5:05 p.m. Friday. The jury adjourned around 5:25 p.m. without issuing a verdict and will resume deliberations Monday morning.

Earlier during the trial on Friday, a self-employed scientist, testifying as a defense witness, said that the KBI should have tested DNA samples from more items than it did for the case.

Stephanie Beine said she reviewed the KBI’s methods and analysis of items collected from the alleged victim. Beine said the KBI should have tested vaginal swabs from the girl, which were available, to see if any of Ross’ DNA could be found there.

“That would have been great information to have,” Beine said.

Beine’s testimony continued a theme by Ross’ attorneys, who have argued that investigators in the case did not collect enough information.

On Thursday, KBI analyst Jena Sparling testified that she had tested semen that was found in underwear the girl was wearing at the party in 2017. The DNA of the semen came back as a “match” for Ross, meaning it is virtually impossible to be from anyone else.

Cooper Overstreet, Ross’ other attorney, repeatedly asked Beine about her review of the KBI’s DNA analysis. Beine said the KBI should have tested the vaginal swabs while also testing all of the different areas of semen found in the underwear. Beine also said it was possible Ross’ semen could have been transferred to the girl’s underwear without the two having sex.

Sparling said Thursday that she stopped testing after finding the match to Ross because it was KBI policy to not test further after making a connection between the alleged victim and the suspect.

During cross-examination, Walker questioned Beine’s credentials, noting that she is self-employed and gave herself the title of senior forensic scientist. Beine said she was self-employed but that her title came from her position prior to starting her own company. She said she has worked in forensic science since 1999, after she received a bachelor’s degree in chemistry.

Additionally, Beine said she found the KBI’s DNA analysis of the semen found on the underwear to be accurate.

The defense also entered video showing the alleged victim dancing with a boy who lived at the home during the party. 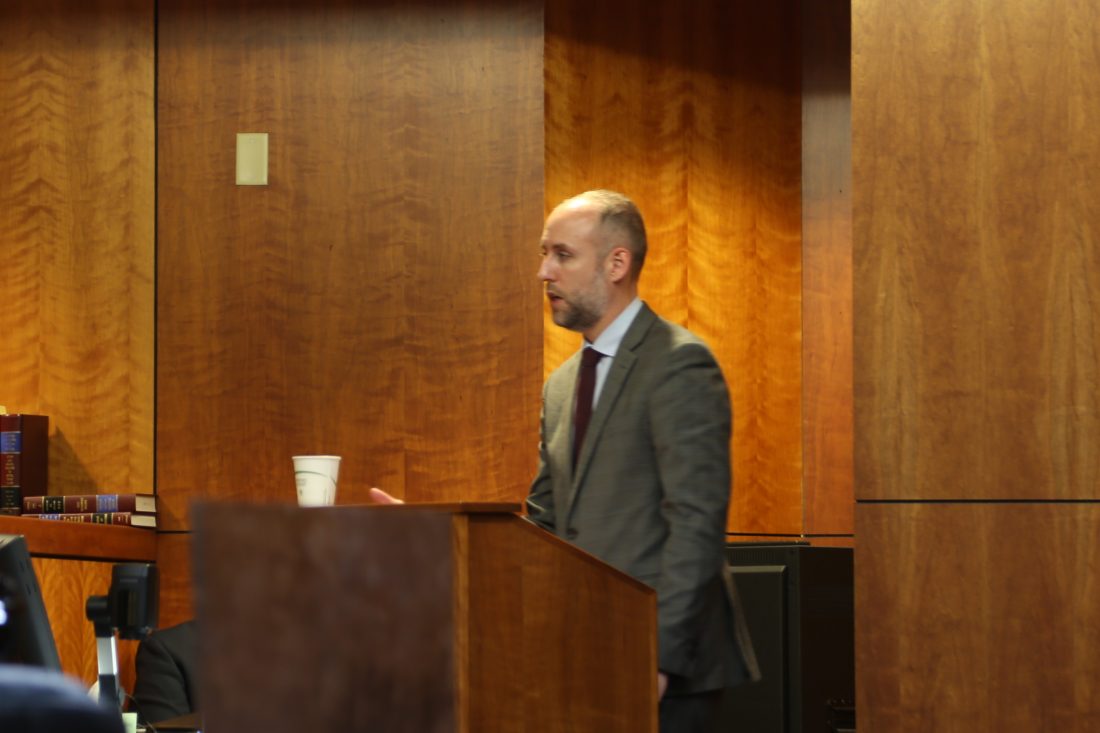 Attorney Cooper Overstreet questions Stephanie Beine, a self-employed forensic scientist, about her review of the Kansas Bureau of Investigation’s forensic analysis of items collected in a Lawrence rape case during a trial in Douglas County District Court of Friday, Nov. 1, 2019.

When asked by the defense when she next saw the alleged victim, the witness initially said she didn’t see her until after the alleged incident, but stopped herself and then said she saw her “for a split second” outside the house in Ross’ truck, sitting on Ross.

Bishop later testified that she met with the girl for about an hour, and she never mentioned seeing Ross and the girl in the truck.

Also when asked about leaving the party, the witness said she left for about 45 minutes and then returned. When pressed on when she could have seen Ross and the girl in his truck, the girl testified that she saw it when she was trying to leave. However, she previously said she went outside and saw them in the truck and then went back inside.

Another witness who was at the party testified he saw the alleged victim in Ross’ truck, sitting on Ross’ lap. However, he said he only saw their silhouettes and could not tell what they were doing.

On Tuesday, the accuser recounted the incident, testifying that she had used alcohol and marijuana at the party and that she had awakened to Ross on top of her trying to take her pants off. She said Ross flipped her over, held her down and began to rape her.

The girl, who is 17 now, said she did not kiss or flirt with Ross prior to the alleged rape.

The prosecution has shown photos of marks on the girl’s collarbone and chest that appeared to be bruises. The defense argued the marks were not bruises, but hickeys.