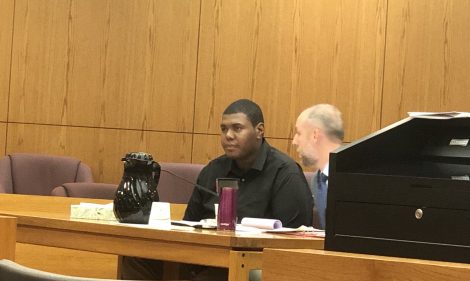 A teenage girl who said she was raped at a Lawrence house party in 2017 recounted the incident in detail during a trial in Douglas County District Court on Tuesday.

The girl, who was 15 at the time and about to start her sophomore year of high school, said she attended the party with a friend and Jordan K. Ross, who was 19 at the time. Although the girl said she enjoyed herself drinking alcohol and smoking marijuana, the night turned tragic because Ross ended up raping her in a dark bedroom at the party, she said.

“I was asking him to stop and where my friends were at and asking if I could leave,” the girl said, fighting back tears as she recounted the incident. “He wouldn’t let me.”

Ross, who is now 22, is facing a jury trial for a charge of rape by force or fear in connection to the alleged August 2017 incident. In the alternative, he is charged with aggravated indecent liberties with a child.

The weeklong trial began Monday, but the girl provided the first testimony in the case Tuesday after the court spent a day and a half for jury selection and hearing opening statements from prosecutor Alice Walker and Ross’ attorney, Cooper Overstreet.

The girl, who is now 17, said after she drank alcohol and smoked marijuana with friends, she went to a bedroom in the house with some female friends. But the next thing she remembers is waking up on the bed in that room, which was then dark, with Ross trying to take her pants off.

When she realized what was happening she said she tried to tell Ross to stop and help find her friends.

“He was telling me it was going to be OK and I was confused as to what was happening,” she said.

Ross continued, she said, eventually taking her pants off, flipping her over on her stomach and raping her. She said she told Ross to stop and he pushed her head down into the bed telling her to be quiet.

“I just remember starting to cry and scream,” she said.

People at the party began banging on the door. They let the girl out of the bedroom and a friend took her to a bathroom in the house. She said her friends tried to find her clothes and help her calm down because she was crying and vomiting.

Eventually she left the house party and stayed the night at a friend’s house. Two days after the incident, the girl attended her first day of school for her sophomore year. After the school day, she told her mother what occurred at the party and went to the hospital for a sexual assault exam.

The girl said she had not taken a shower between the incident and when she went to the hospital, where she was examined for DNA. She also provided the examiners with the clothes she wore the night of the party.

After the exam, she went to the police to tell them what happened, the girl said. The police asked her to call Ross and record the conversation, which is expected to be entered as evidence.

The court finished for the day before hearing the recording on Tuesday. The girl is expected to continue her testimony when the trial resumes Wednesday morning.

In her opening statements, Walker told the jury that evidence in the trial will show that Ross had sex with the girl without her consent, and that will be corroborated by DNA evidence from her clothes, including Ross’ seminal fluid.

However, Overstreet told the jury that they can expect to hear from witnesses at the party who were intoxicated and cannot accurately remember what occurred, and the evidence will show Ross never had sex with the girl.

Overstreet acknowledged that witness testimony will say Ross raped the girl, but he said the physical evidence — such as the girl not reporting any bruises or other physical harm in the exam — will not support their testimony.

“The physical evidence will not corroborate what the witnesses say,” Overstreet said. “You’ll find these things won’t add up.”