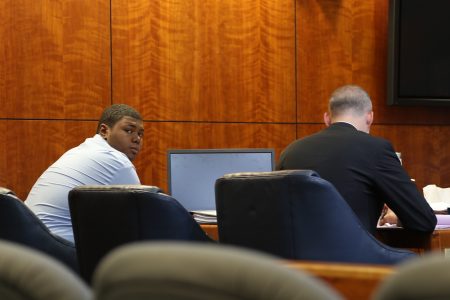 Jordan K. Ross, left, looks around the courtroom during his trial in Douglas County District Court on Thursday, Oct. 31, 2019. Ross, now 22, is accused of raping a 15-year-old girl during a Lawrence house party in August 2017.

The DNA of a Topeka man accused of raping a Lawrence teen was found in the alleged victim’s underwear when tested by the Kansas Bureau of Investigation, according to testimony during trial Thursday in Douglas County District Court.

Jena Sparling, a DNA analyst for KBI, said seminal fluid that was collected from the 15-year-old girl’s underwear, included a DNA “match” to the defendant, Jordan K. Ross. Sparling said it is virtually impossible that the analyzed DNA belonged to anyone else.

Ross, 22, is accused of raping the girl at a Lawrence house party in August 2017, when he was 19. He is facing a jury trial for a charge of rape by force or fear in connection with the alleged incident. In the alternative, he is charged with aggravated indecent liberties with a child.

Sparling testified in the trial Thursday afternoon, explaining how she tested the clothes of the girl to find any evidence. She told the jury she was instructed to find DNA belonging to Ross because of allegations of rape.

The clothes were provided to the KBI by the Lawrence Police Department, which collected them from the girl when she reported the incident to the police a few days after the party.

Along with the underwear, Sparling said she was given a pair of jeans and swabs from a sexual assault exam of the girl. However, Sparling said she did not test those items because KBI policy says she should no longer test any items when a connection is made between the alleged victim and suspect.

“We got the probative information so we didn’t test any further,” Sparling said.

When questioned by Cooper Overstreet, one of Ross’ defense attorneys, Sparling said she does not make judgments on how DNA ends up somewhere, so she could not say how or why Ross’ semen was in the girl’s underwear.

Earlier in the trial proceeding Thursday morning, Sarah Swain, another attorney for Ross, questioned whether the lead investigator in the case collected all the evidence available in the incident. 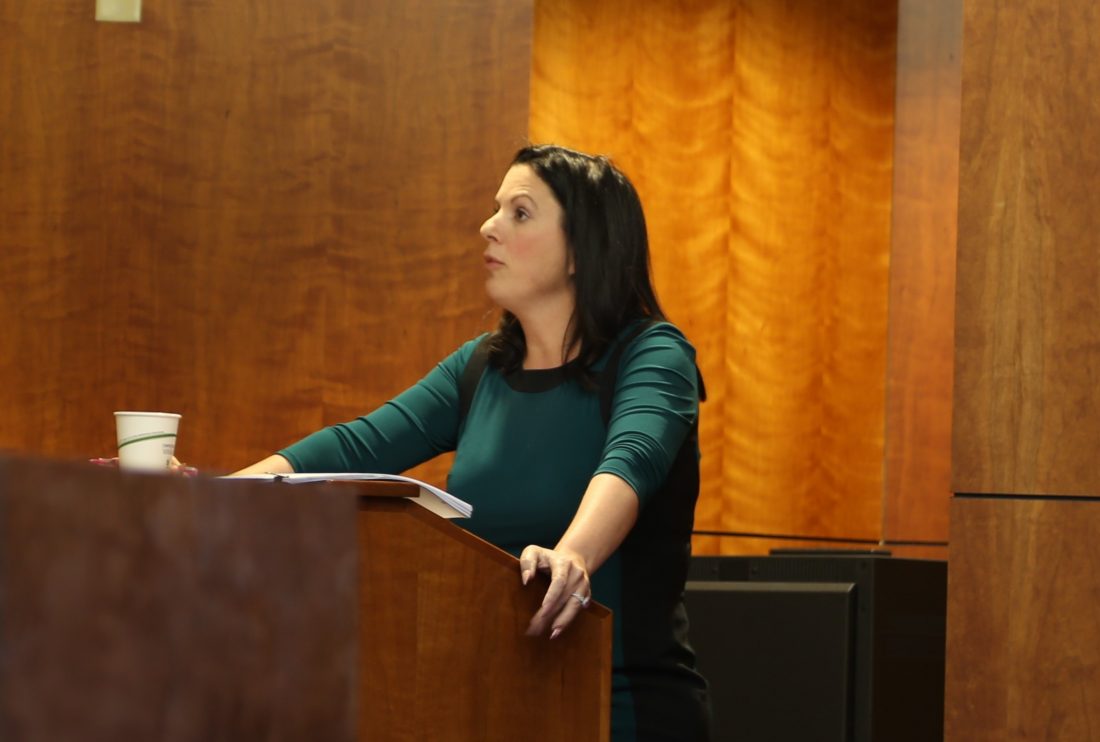 Swain asked Lindsay Bishop, an officer for the Lawrence Police Department, why she didn’t have Ross submit to a suspect examination for sexual assault. The exam is similar to a sexual assault examination that a victim can take at the hospital and attempts to collect similar information, Swain said.

Bishop said she did not pursue a suspect sexual assault exam for Ross because the incident was reported to the police days after it occurred. She said that kind of exam was usually only conducted when the suspect was found during the incident.

“In my years of doing this, I’ve only seen a suspect examination done when we find the suspect raping the child,” said Bishop, who has investigated juvenile crimes for the police department for about three years and served as an investigator for the Kansas Department for Children and Families prior to her police career.

Bishop said she did not obtain any messages from the social media app because she did not believe any messages on it would be relevant to the case. She said the girl reported to police that they were only acquaintances and Bishop had no reason to believe otherwise.

Earlier in the trial, the girl, who is now 17, testified that she did not have a prior relationship with Ross and she did not flirt with him or plan to have sex with him.

Bishop also added that any conversation between them, including flirting, does not determine whether a crime had taken place at the house party.

As a witness for the defense, an 18-year-old woman told the jury she was in a romantic relationship with the alleged victim for about two years, beginning in July 2017. The woman said she and the girl were dating for about a month when she went to the party where the incident occurred.

When Swain questioned the alleged victim on Tuesday about attending the party, she asked if her girlfriend was mad at her for going because boys would be at the party. The girl said she and her girlfriend did not argue about it and she was not mad she attended the party.

When asked the same question on Thursday, the woman also said she and the alleged victim did not argue about the party. But Swain asked again, suggesting the woman told investigators that she and the girl argued over her attending the party. The woman again said they never argued over it.

The woman also told the jury she did not hear from the girl about the party until she called her around 4 a.m. the next day. She said the girl did not say anything of substance but sounded hysterical.

The trial will resume Friday morning.