In audio recording, defendant in Lawrence rape trial tells police he had sex with teen girl 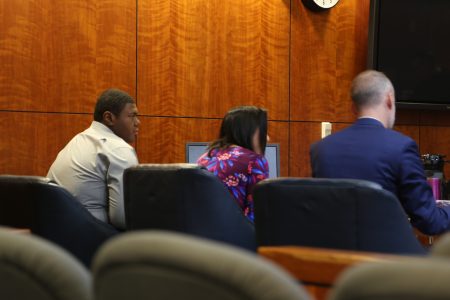 Jordan K. Ross, 22, left, sits with his attorneys, Sarah Swain and Cooper Overstreet, during his trial in Douglas County District Court on Wednesday, Oct. 30, 2019. Ross is charged with rape for an alleged incident with a 15-year-old girl at a Lawrence house party in August 2017.

A Topeka man accused of raping a Lawrence teenager admitted to police that he had sex with the girl during an August 2017 house party, the jury heard in a recorded interview Wednesday in Douglas County District Court.

But what Jordan K. Ross said in the interview, which was admitted as evidence in his trial, appears to contradict what he said in other admitted evidence, including a recorded phone call with the alleged victim.

Ross, who is now 22 and was 19 at the time of the incident, is facing a jury trial for a charge of rape by force or fear in connection with the alleged rape. In the alternative, he is charged with aggravated indecent liberties with a child.

Ross’ statement to police about having sexual intercourse with the girl, who was 15 at the time, contradicts what he told the girl on a recorded phone call, which was also admitted as evidence earlier in the trial on Wednesday.

While speaking to the girl about a week after the incident, which the girl recorded with the help of the police, Ross repeatedly told her “nothing happened” and that they did not have sex.

But Ross told police they did have sex, early in the 46-minute recorded interview.

“We had intercourse,” Ross said on the recording, noting he thought the girl, who was 15 at the time, was actually 18.

Ross also appeared to contradict himself during the interview with police about what sex positions the two engaged in during the incident. In the recording, Ross told the police that he and the girl used “two or three” positions, including her getting on top of him and “riding” him. They then switched to a different position, where he was behind her and she was on the bed.

The officers asked what Ross did when the two were finished and Ross said he didn’t know. When asked if he helped the girl put her clothes on, Ross told the police he couldn’t help her put her pants on because they were still around her ankles.

One of the officers, Josh Leitner of the Lawrence Police Department, said Ross’ account didn’t make sense, because it’s impossible for the girl to still have her jeans on around her ankles and “ride” him in the first position Ross described.

Ross then said the girl took her pants off for the first position but put them back on before they moved to the second position. He said they were putting their clothes on but she said she wanted to continue, which is why her pants were back on her ankles when they finished having sex.

He also told the police that the girl straddled him and kissed him in his truck before they entered the party, but a friend of the girl, who is also Ross’ family member, had testified earlier on Wednesday that all three of them went into the party together. She did not mention Ross and the girl kissing in the truck.

Recounting his version of events on the audio recording, Ross said the only noise the girl made during the incident was moaning and saying “yes.” The girl, however, said during her testimony on Tuesday and Wednesday that she was crying, screaming and asking him to stop.

Ross has not yet testified, and it’s unclear whether he will do so.

Earlier Wednesday in the trial proceedings, the friend said that she saw the girl and Ross leave the bedroom after the incident at the party. The friend said she witnessed Ross following the girl out of the room and saying he may have ejaculated into the girl.

The friend told the jury that she was reluctantly testifying, but she shared her memory of arriving at the party with the girl and Ross. She said that during the party she and some friends, including the alleged victim, went upstairs to a bedroom to hang out.

The friend said the others eventually left, but the girl stayed in the room alone. When the friend returned to the room, the door was locked and she couldn’t get in. She said she knocked on the door and asked if the girl was OK. Shortly afterward, she said, the girl came out of the room crying. 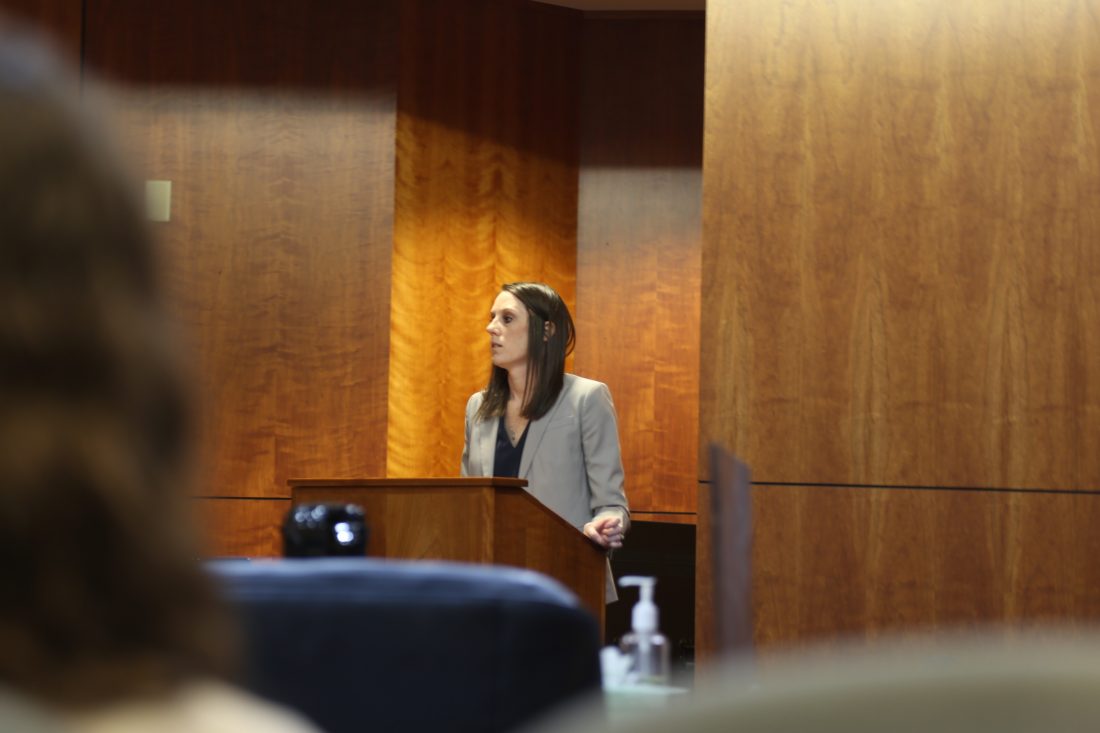 Prior to her friend taking the stand, the alleged victim continued her testimony, which began on Tuesday.

Prosecutor Alice Walker also showed photos of marks on the girl’s collarbone and chest that appeared to be bruises. The girl said the marks were not on her body before the party.

However, one of Ross’ defense attorneys, Sarah Swain, asked the girl if it was possible the marks were hickeys rather than bruises. Swain suggested the girl was kissing Ross in his truck before entering the party and the hickeys could have come from that incident.

The girl, who is 17 now, said she did not kiss or flirt with Ross prior to the incident. Additionally, the friend testified that she, Ross and the alleged victim had all entered the party together.

On Tuesday, the girl recounted the incident, testifying that she had used alcohol and marijuana at the party and that she had awakened in a dark bedroom to Ross on top of her trying to take her pants off. She said Ross flipped her over, held her down and began to rape her.