‘All I know is her name’: Ottawa resident injured in tornado rescued by stranger 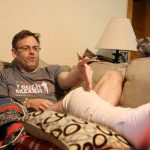 Terry Seymour indicates where surgeons inserted a titanium rod into his right leg while recovering on Friday, May 31, 2019 in his home.

Driving home to Ottawa despite a tornado warning Tuesday afternoon, Terry Seymour pulled to the side of Kansas Highway 10 when visibility dropped to less than 10 feet in the rain.

“I figured I would try to get as close to home as I could before having to pull over,” Seymour said. “Everything hit the fan.”

Seymour was caught in the devastating EF-4 tornado on the South Lawrence Trafficway. His leg was broken when his Jeep rolled over him and he had no reception to call 911. As he was stranded on the roadway, a person with the first name of Tracy came to his aid.

“All I know is her name,” Seymour said. “I just lay outside in the rain and she stayed with me and comforted me.”

Seymour’s Tuesday afternoon was not going well in Eudora. After spilling hot sauce on his pants and sitting through a long appointment, Seymour, an insurance agent, texted his wife that he was going to race home.

“I honestly just wanted to get home,” Seymour said.

When the winds around his Jeep started to pick up, Seymour tried to leave the vehicle to take cover in the ditch beside the road.

“The wind ripped (the car door) out of my hand and folded it all the way back to the hood of my car and took my glasses with it,” Seymour said. “As soon as I stepped out, the winds just whipped me around like a ragdoll.”

Prone on the ground and with the tornado above him, Seymour crawled back toward his Jeep to take cover next to the wheel. Then the car went airborne.

“I watched it lift up off the ground, tumble over my head and land on my leg,” Seymour said.

Seymour knew his right leg was broken and tried to call 911, but his phone had no reception. He lay on the roadway for some time, drenched by the rain. Tracy arrived shortly after and was able to get through to 911. She asked if Seymour could get into her car, but Seymour was afraid of damaging his leg further.

“It was the right thing to do,” Seymour said. “She just did a decent thing to stick around and help somebody who needed it.” 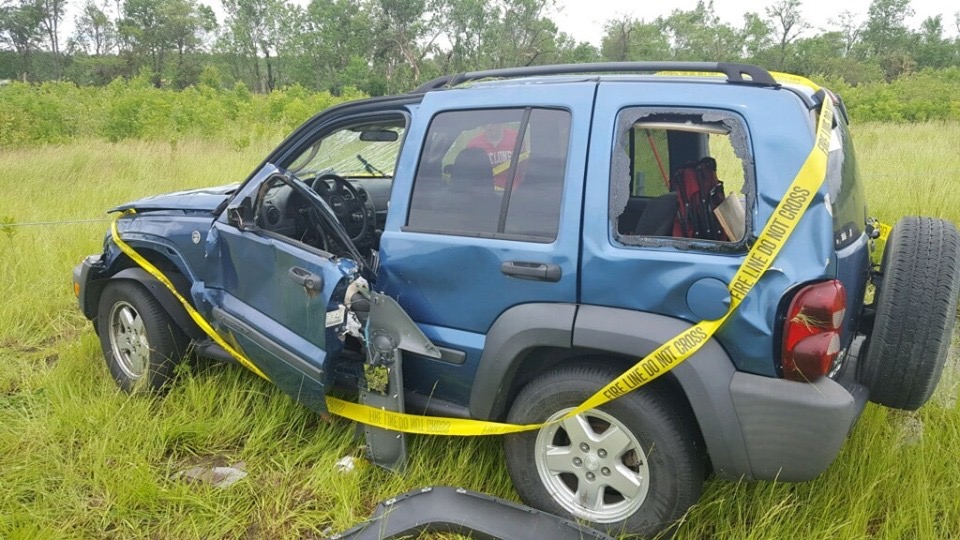 Terry Seymour’s Jeep, pictured Wednesday, was tossed by 170 mph winds off Kansas Highway 10 during a tornado on Tuesday, May 21.

Tracy stayed with Seymour, talking with and comforting him, until emergency medical technicians arrived at the scene. Seymour was taken to Lawrence Memorial Hospital, where he had a titanium rod surgically inserted to stabilize his leg. He is now healing at home.

Rosa Seymour, Terry’s wife, said the family has received an outpouring of support. She said life would be harder with Terry’s injury, as he could not go back to work anytime soon. Terry said he could do some work over the phone and had other means of getting around.

“Lucky for me, my son is 15 and has his learner’s permit,” Terry said. “He’ll be able to shuttle me around.”

Rosa said she could not thank Tracy enough for staying with her incapacitated husband.

“She was there for him when I couldn’t be,” Rosa said. “The idea of going through this world without him … I don’t want to think that way.”

More coverage of the tornado aftermath

• June 1 — ‘All I know is her name’: Ottawa resident injured in tornado rescued by stranger

• May 31 — ‘It was like walking through a nightmare’: Eudora woman, 88, survives tornado that wiped out home of over 40 years

• May 31 — Photo gallery: Aerial tour of tornado devastation near Lawrence, Eudora and Linwood

• May 30 — Governor views 30-plus miles of Kansas tornado damage

• May 29 — Tornado news and notes: Pendletons clean up heavy damage on farm east of Lawrence

• May 29 — Tornado news and notes: When sirens sound, some businesses lock up — know where to seek shelter