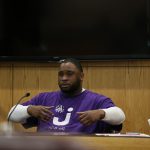 A motorist who was shot by police after a traffic stop turned violent has received 12 months of probation for battering an officer.

Lawrence resident Akira S. Lewis pleaded no contest Thursday in Douglas County District Court to battery against a law enforcement officer. Lewis was sentenced to 12 months of probation, required to take anger management classes, and must pay court costs and other fees, among other conditions.

The incident occurred on May 29, 2018, in the 100 block of West Sixth Street, at the north end of downtown, after Officer Ian McCann pulled Lewis over for a seat belt violation as part of a seat belt campaign. In police dashcam video, Lewis, who is black, contends he was racially profiled, refuses to provide McCann his license and registration and demands that a supervisor be called. McCann attempts to physically remove Lewis from the car and Lewis subsequently strikes and body slams McCann. Another officer, Brindley Blood, shoots Lewis within seconds after the physical altercation begins. Blood told investigators later that she meant to use her Taser, not her gun.

Lewis was charged with battery against a law enforcement officer, interference with law enforcement and driving without proof of insurance, all misdemeanors, and failure to wear a seat belt, a traffic infraction.

Before accepting Lewis’ no contest plea on the battery charge, Judge James George informed him that battery on a law enforcement officer carried a maximum penalty of 12 months in jail and a maximum fine of $2,500 and that he did not have to follow the penalties called for in the plea agreement.

The plea agreement calls for Lewis to serve 12 months of supervised probation and no jail time. As part of his probation, Lewis must take anger management classes; maintain full-time employment or student status; have no contact with McCann or his family; and consume no alcohol or illegal drugs, subject to testing by his probation officer. Under the plea agreement, the other misdemeanor and traffic charges against Lewis will be dismissed.

Prosecuting attorney Aubrey Sample requested that George grant the conditions of the proposed plea agreement, which she said were worked out among the parties. She said the plea agreement took into account the wishes of McCann, who supported it. Sample noted that McCann was present in the courtroom, but said he did not wish to speak.

Lewis’ defense attorney, Shaye Downing, also said she agreed with the conditions of the plea agreement. That Lewis was shot during the altercation was not mentioned, but Downing said there were “lots of circumstances” related to the incident. When proceedings began, Downing also asked the judge’s permission for Lewis to remain seated because of a medical condition.

George said that he thought the parties had reached a reasonable plea agreement and agreed with the terms of Lewis’ probation. When asked by George if he wished to say anything, Lewis responded, “No, sir.” Under the plea agreement, Lewis must also pay $158 of court costs and a $60 probation fee.

Blood was also charged in relation to the incident, but Judge Peggy Kittel dismissed those charges in March, as the Journal-World previously reported. Prosecutors had alleged that Blood acted recklessly when she shot Lewis despite “extensive” police training. Kittel disagreed, saying Blood made a mistake and may have been negligent but evidence at the preliminary hearing did not support the felony of reckless aggravated battery.