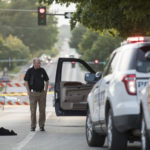 A traffic stop that ended with a black man being shot by police in downtown Lawrence began when an officer pulled him over for a seat-belt violation, initiated as part of a national seat-belt enforcement campaign, according to the outside agency investigating the incident.

The man was taken into custody at the scene and remained hospitalized in stable condition Wednesday, according to the Johnson County Sheriff’s Office, which is handling an investigation into Tuesday’s incident involving two Lawrence Police Department officers.

Those two officers have been placed on administrative leave, per department policy, while the investigation is pending, according to the sheriff’s office.

Investigators are not releasing names, ages or other additional information about the man who was shot or the officers involved at this time, Johnson County Sheriff’s Lt. Paul Nonnast said.

Lawrence police referred questions about the incident to the Johnson County Sheriff’s Office, which shared some of what its investigation into the incident has revealed so far, in a news release issued on Wednesday.

About 5 p.m. Tuesday, a Lawrence police officer assigned to the special seat-belt enforcement initiative saw a seat-belt violation and conducted a traffic stop in the 100 block of West Sixth Street, according to the release.

“The driver was contacted and the reason for the stop was explained,” the release said.

Shortly after the stop, a second officer arrived.

“Once the additional officer arrived, the driver, who was uncooperative, was lawfully detained and repeatedly instructed to exit the vehicle but failed to comply,” the release said. “The driver resisted arrest and a struggle ensued.”

During the incident, one officer was “battered” and knocked to the ground, where the physical struggle continued, according to the release. While the driver continued to batter the officer, the backup officer fired a single shot, striking the driver.

The driver was taken into custody, and officers rendered first aid until medical personnel arrived on scene.

Nonnast on Wednesday declined to answer additional questions that were not explained in the news release. Those include: at what point the officer ordered the driver out of the car and why, how the incident escalated into an altercation and more about when and why the second officer arrived at what began as a seat-belt stop.

In a brief statement about an hour after the incident, Lawrence police Capt. Anthony Brixus said that a knife had been recovered from the scene but that it was not clear at that point whether it was involved in the incident.

Nonnast on Wednesday also declined to answer more questions about whether weapons other than the firing officer’s gun were involved, including the knife.

Nonnast said the Johnson County Sheriff’s Office expected to release updates but did not have a firm timeline for when those would occur.

Johnson County detectives ask anyone with information about the incident to call them at 785-843-0250.

“The Johnson County Sheriff’s Office and the Lawrence Police Department ask for calm as we work diligently to determine the facts of the case,” the news release said.

The Douglas County District Attorney’s Office is monitoring the law enforcement investigation and expects to receive a report when it is completed, that office said in a news release Wednesday.

The DA’s office was notified about the officer-involved shooting about 5:45 p.m. Tuesday, and two senior attorneys went to view the scene at about 10 p.m., according to the release.

The spot where the traffic stop and shooting occurred was in the westbound lanes of Sixth Street between Vermont and Massachusetts streets, next to Robinson Park.

In the preliminary information shared Tuesday evening, Brixius said that an officer had pulled over a vehicle, there was an altercation and the officer called for assistance, in distress. A second officer also responded to the scene. At least one of the officers fired a weapon, hitting the man who was struggling with the officer.

A Journal-World reporter at the scene minutes after the shooting saw a black man lying in the street next to the black SUV that had been stopped. First responders loaded the man onto a gurney and into an ambulance.

A witness told the newspaper that the incident unfolded right in front of him as he was stalled in traffic on Sixth Street. He said that at that time, there already were two patrol vehicles on the scene, but he did not see obvious signs of a struggle.

He said he saw a police officer standing next to the open driver’s side door of the SUV, speaking to the person inside. Suddenly, he said, the driver jumped out of the SUV “with both fists swinging at the officer,” and the two went to the ground right in front of the witness’s car.

Within seconds, a second officer ran from the direction of the second patrol vehicle, reached to her belt and fired, the witness said.

Johnson County Sheriff’s Office investigators began arriving about 7:30 p.m. to conduct their investigation at the scene, including taking photos and placing evidence markers around the SUV.

Along with law enforcement agencies nationwide, the Lawrence Police Department and the Douglas County Sheriff’s Office both announced that they were participating in the “Click It or Ticket” national seat-belt enforcement campaign May 21 through June 3, timed to run through Memorial Day weekend.

Their amped-up enforcement of seat-belt laws is supported by grant money from the Kansas Department of Transportation.

Kansas law says anyone in the front seat has to wear a seat belt, and law enforcement can pull over a vehicle for that reason alone, according to a Kansas Highway Patrol summary. The same is true for children an officer sees unrestrained in a car, in violation of state law.