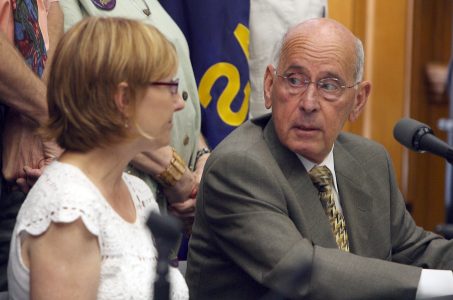 For Lawrence resident Laura Green, years of advocacy for progressive marijuana laws began with one event.

“I originally became aware of the harm that was being done to people through a family member who got cancer in the ’80s and was recommended to use marijuana, but then didn’t have a way to get it,” Green said. “And my family are not criminals, so we wanted to follow the law.”

After that experience came another. A friend of Green’s, Nancy Hadley, ended up serving six months in federal prison after being convicted of misdemeanor charges for growing marijuana in rural Douglas County. Green, who led the push for changes to the city’s marijuana possession penalties, emphasized she is not an advocate for marijuana use, but rather an advocate against criminal penalties for using marijuana. She said convictions for marijuana possession affect people’s lives and livelihoods for years to come, especially if they are felony convictions.

“There’s a lot of harm that’s caused by a simple marijuana arrest or a simple marijuana ticket,” Green said. “And that’s another unintended consequence of the drug war, is that then people get excluded from public housing, jobs; all kinds of things happen to you when you get a felony. And you didn’t harm anyone, you didn’t steal anything.”

Green’s advocacy for changes to the city ordinance is only her latest effort. Green worked with former Kansas Attorney General Robert Stephan in 2007 to advocate for medical marijuana at the state level and in 2005 advocated for the creation of the original city marijuana ordinance, as the Journal-World reported at the time. Green wanted such charges to be handled at the municipal level in part so that marijuana convictions would not disqualify people from receiving federal financial aid.

However, Green said in recent years she started hearing from a lot of people that the city’s ordinance was costing those charged with possession hundreds of dollars in fines and other expenses. Several residents expressed concern to the commission that those fines were especially burdensome for those with low income, and they also noted national statistics that indicate people of color are more likely than white people to be charged with marijuana possession even though they are less likely to be users.

“When we look at the cost to the individual who receives the ticket for marijuana under the previous ordinance, it could run into the hundreds, almost a thousand dollars, for what really is just a minor conviction in our county court,” Green said. “So we just thought that it was out of line with the offense.”

Under the old ordinance, people charged with possession of both marijuana and drug paraphernalia paid a minimum $200 fine for possession, a minimum $200 fine for paraphernalia, $63 in court costs and up to $150 for a drug evaluation. If the person received a diversion, they would pay an additional $130 for diversion and potentially more if the company that did the drug evaluation recommended substance abuse treatment.

In March, the Lawrence City Commission moved forward with changes that decreased the local fine for possessing small amounts of marijuana to $1. The changes apply to people 18 and over who are convicted of possessing 32 grams or less of marijuana. Changes to marijuana possession penalties made by the commission only apply to first and second convictions because third offenses are felonies under state law and therefore cannot be processed in municipal court.

Those caught in possession of marijuana are still charged, unless they qualify for diversion, and the charge will still be on their record. Because of the severity of a third offense, commissioners opted to leave the drug evaluation requirement for the second offense.

Regarding fears of unintended consequences of the city working to partially decriminalize marijuana, Green said many of those fears are not supported by data. She said even states that legalized recreational marijuana, such as Colorado, have not found that it has opened up a “Pandora’s box” of problems. She said, for instance, that Colorado has not seen an increase in use among youth.

A state report shows that youth rates of marijuana use have not changed in Colorado, which legalized marijuana in 2014, and adult use has increased only slightly. Overall marijuana crimes have not increased, though there is more organized crime associated with marijuana.

More specifically, the Colorado Division of Criminal Justice published a report on the impacts of marijuana legalization last year. Youth surveys show the percentage of kids ages 12 to 17 who reported using marijuana was about 9% in the 2015-2016 school year, the lowest it’s been since the 2007-2008 school year. Adult use of marijuana did increase from 2014 to 2017, from 13.4% to 15.5%.

The report indicates that although the quantity of cases filed for serious marijuana-related crimes has remained consistent with pre-legalization levels, organized crime cases have generally increased since 2008. Specifically, there were 31 organized crime case filings in 2012 and 119 in 2017.

Green said it seems the tide is also turning locally, and she’s found people are much more willing to consider changes now than when she first proposed the idea of a local ordinance.

“I will say that when I first brought the ordinance up, people were not as willing to discuss it as they are now,” Green said. “And now people say to me, ‘Oh, it’s about time,’ or ‘Oh, we need to legalize it.’ And even 10 years ago people were saying, ‘No, we can’t do that.'”

The conversation about how marijuana possession is handled at the city level will likely continue. Green said she plans to request data from the first six months of the new ordinance in the coming weeks. She said she’d like to look at how many people are being charged with possession of marijuana now that the fine has been lowered and whether those people are also being charged with possession of drug paraphernalia, which still carries the heavier $200 fine.