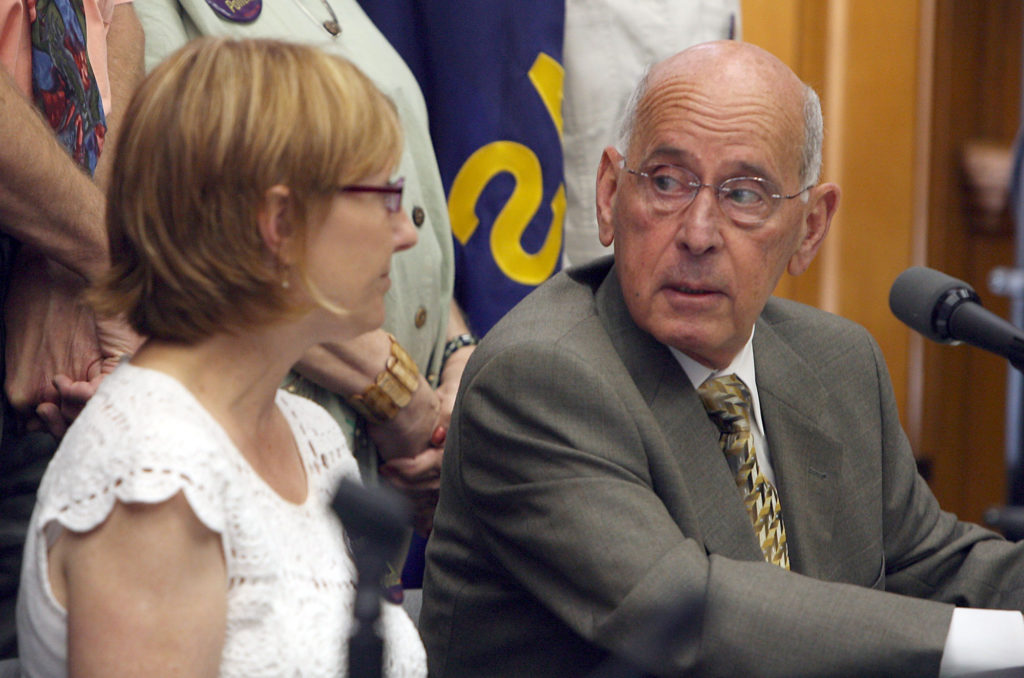 Former Kansas Attorney General Robert Stephan, right, looks at Laura Green, director of the Kansas Compassionate Care Coalition, during a news conference Friday at the Statehouse in Topeka. The group is calling for the legalization of medical marijuana by the Kansas Legislature.

Topeka ? The push to legalize medical marijuana got a big lift Friday when former Attorney General Bob Stephan announced his support and urged Kansans to get behind the effort.

“The state should not pre-empt the role of the physicians when it comes to deciding what is best for ill Kansans,” said Stephan, a cancer survivor and the longest serving attorney general in state history.

But lawmakers said there was little chance of legalizing medical marijuana, at least in the 2008 legislative session that starts in January.

The Kansas Medical Society has taken no stand on the issue, but the Kansas State Nurses Association plans to consider a resolution in October for the legal use of therapeutic marijuana.

“On behalf of registered nurses statewide, we believe that this is a relevant and timely health care issue that warrants discussion,” KSNA President Ellen Carson said.

At a news conference with the Kansas Compassionate Care Coalition, Stephan recounted his own fight with cancer, and thousands of visits with other cancer victims.

Stopping to gather his emotions, Stephan said marijuana should be available to people who are suffering pain that cannot be alleviated by other treatments.

“When it comes to marijuana, it is treated like some voodoo medicine that should not be recommended by physicians. I find this to be absurd,” Stephan said.

Stephan served as attorney general from 1979 until 1995. In response to questions, he said he never used marijuana.

The Kansas Compassionate Care Coalition, which has 400 members in chapters in Wichita and Lawrence, seeks to have Kansas join 12 other states in passing legislation that allows physicians to recommend the use of marijuana for medical purposes.

Stephan and the coalition said marijuana can relieve pain and nausea for patients with cancer and other conditions, such as AIDS, glaucoma and anxiety disorders.

But Jerry Slaughter, executive director of the Kansas Medical Society, said his concern would be the legal protection of physicians because marijuana is an illegal drug under both state and federal law.

Slaughter said there are probably doctors on both sides of the issue.

“There is a growing debate about pain management,” he said.

He also said it would be difficult to control the cultivation and distribution of marijuana, and that he believed physicians have adequate medicines to treat pain.

State Sen. Phil Journey, R-Haysville, said he opposed it too, but was willing to consider it.

Journey said he doubted such a proposal would be approved by the Legislature, but that Stephan’s backing gave the issue more traction.