If a newly formed group gets its way, marijuana will become a low priority for Lawrence police.

Getting busted for pot would be similar to getting a speeding ticket. And, marijuana-possession cases would be resolved in a streamlined fashion in city court.

The changes, which are supported by the city’s mayor, have been proposed by a group called the Drug Policy Forum of Kansas, which formed in May and has an office at 941 Ky.

Last week, the group’s executive director, Laura Green, wrote a letter to city commissioners asking them to consider writing a marijuana and drug paraphernalia ordinance into the city code. The commission is expected to discuss the issue at its Sept. 6 meeting.

“We’re not proposing legalization,” the 44-year-old Green said Tuesday. “I’m just asking them to consider making it part of the city code. … Part of what I’m asking them to do is to make possession of marijuana a low priority. Don’t seek it out. Don’t go looking for it as if it’s the Holy Grail.”

Unlike other Kansas cities – including Wichita, Topeka and Olathe – Lawrence has no city ordinances covering marijuana. That means the cases must be handled in District Court instead of the more informal, streamlined city court. 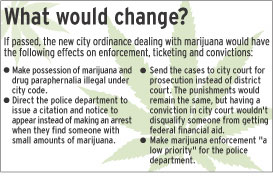 In Green’s view, cases involving small amounts of marijuana and drug paraphernalia should be handled with a citation and notice to appear in city court, not an arrest. Penalties in city court would be similar to those already being handed down in District Court, she said: a combination of diversion, treatment, probation and a maximum fine of $2,500 or a year in jail.

Cases involving second-time possession – a felony under Kansas law – would still be handled in District Court.

Green argues the change would save state tax dollars required to investigate and prosecute marijuana cases in District Court.

“We have so many hands out at the state budget level that we have to be very careful about where we put those resources,” she said.

And, Green said, shifting the prosecutions to city court would keep students from being disqualified for federal financial aid under the terms of a 1998 federal law.

“I don’t want to see a young person denied the opportunity to go to college because they made a mistake,” she said.

Dist. Atty. Charles Branson, whose office now handles all marijuana cases in Douglas County, said he’s not in a position to tell police what their priorities should be. But he likes the idea of sending marijuana-possession cases to city court.

“The District Court system is here, in my opinion, for more serious cases,” he said. “There’s a lot of savings, I think, in being able to have a city court be able to do these things.”

No detailed figures were available Tuesday, but Branson estimated the move would reduce his caseload by two or three cases per week.

Mayor Boog Highberger said he was generally supportive of Green’s ideas, in large part because of the issues involving student financial aid.

Under the 1998 Higher Education Act, Green said, students are disqualified for financial aid if they have a drug conviction in state or federal court. According to Green’s figures, more than 160,500 students nationwide have been found ineligible for financial aid because of the law.

“It wouldn’t bar a student from getting financial aid,” Highberger said. “That’s appropriate because I think that would be a pretty harsh penalty for getting caught with a little pot.”

When told that KU officials had previously said that it seemed very few of their students were affected by the law, Highberger said: “How do they really know? How many students aren’t applying at all because they know they won’t get anything?”

Highberger also said he supports the idea of making it a lower enforcement priority for police.

“I don’t think vigorously prosecuting people for small amounts of marijuana is a very good use of our limited resources,” he said.

Commissioner Mike Amyx said he wasn’t sure whether he supported the changes and was awaiting more information and input from other leaders. Amyx said he wouldn’t consider anything that would lessen penalties for marijuana use.

“I would never think of doing that,” he said.

“I don’t think those are my feelings at all. It is a crime, and that is what we do. We carry out laws. … It is not something where you pass a law and then just wink at it,” he said.

Green said the Drug Policy Forum of Kansas was filing its official papers to become a nonprofit corporation. Green and attorney Bob Eye are co-founders of the group.

The effort to draft a city law comes on the heels of a similar, successful ballot initiative in Columbia, Mo. The city prosecutor in Columbia began a practice of deferring prosecution on first-time marijuana offenses. If the person stays out of trouble for a year, the case never is filed.

Lawrence City Prosecutor Jerry Little said handling the cases in city court would simplify things. For example, in District Court, prosecutors routinely request $400 lab tests from the state to verify a suspect substance is marijuana. In city court, Little said, prosecutors likely would skip that step unless there’s a dispute about what the substance is.

But Little said there are still unresolved questions about how a marijuana ordinance would work, such as what amounts of the drug would be considered for “personal use” instead of for sale.