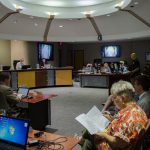 A Lawrence resident speaks during public comment at the Lawrence City Commission's meeting on Tuesday, July 2, 2019, at City Hall.

City leaders expressed interest Tuesday in putting a cap on the number of whole-home Airbnbs and other short-term rentals that can be operated by a single owner.

As part of its meeting Tuesday, the Lawrence City Commission voted 3-2, with commissioners Stuart Boley and Leslie Soden opposing, to have city staff draft changes to existing regulations that would establish a licensing process for all short-term rentals, including whole-home rentals where the property owner lives elsewhere. The license program would allow all types of short-term rentals by right citywide, but would allow the licenses to be revoked for just cause. The commission also directed staff to investigate a potential provision to limit how many whole-home short-term rentals one individual can operate.

One option the commission considered was to ban whole-home rentals from most residential areas, but the majority of commissioners said they did not want an outright ban. Mayor Lisa Larsen said she didn’t want to completely shut whole-home rentals out, but wanted instead to get more information and look at different ways to manage them.

“We’ve got to either get more information or we need to look at this in a different way,” Larsen said. “But I don’t think the options completely address some of the issues that we have been discussing.”

Commissioners considered the revisions to the short-term rental program after they suspended a component of the program this spring due to concerns about how it operated. Creating a cap on the number of whole-home rentals one owner can operate was not one of the potential changes presented by city staff, but was brought up by commissioners as a way to address the affordable housing and neighborhood concerns.

Boley and Soden both said they were interested in the option to ban whole-home short-term rentals in residential areas.

Under the current regulation process, someone who wants to operate a whole-home rental must apply for a special use permit, which notifies neighbors of the application. Neighbors can then file a protest petition. If the petition is successful, the permit can only be approved if four of the five city commissioners vote in favor of it. If the commission decides to grant the permit, it runs with the land and could remain in place permanently, even when ownership of the property changes. In the memo, city staffers say they’ve heard concerns about the process from all involved and that the special use permit process may not be the best process to use for whole-home rentals.

In other business, the commission voted 4-1, with Soden opposing, to defer the construction of the 13th Street bicycle boulevard until 2020 and move forward with the 21st Street bicycle boulevard this year, but to consider less expensive options for its construction. The commission previously approved design funding for both boulevards, with the expectation that they would both be constructed this year, but made the changes because of a $250,000 overage in the overall project’s budget.