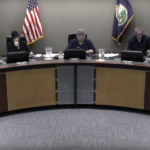 Lawrence city commissioners discuss whether a property should be granted an Airbnb permit at their meeting on March 5, 2019, at City Hall.

City leaders have denied an Overland Park couple a permit to use a house in Lawrence as an Airbnb short-term rental property, citing a protest petition from neighbors and other factors.

The Lawrence City Commission voted 4-1, with Commissioner Matthew Herbert opposing, to deny the permit as part of its meeting this week.

In explaining her vote, Mayor Lisa Larsen cited both the protest petition and the incompatibility of an Airbnb property with the surrounding neighborhood.

“I do want to see these short-term rentals be successful in neighborhoods where it does seem appropriate,” Larsen said. “And I have a hard time with this neighborhood because what I’m seeing is there’s not a lot of rentals already around here and we’ve got a neighborhood that has signed off on a successful petition, and I think neighborhoods should have a right to have some say in what goes into their neighborhood.”

Specifically, in addition to the petition, the commission denied the permit for the property, at 921 Holiday Drive, on the basis of neighborhood compatibility, affordable housing issues and safety, including the lack of sidewalks in the neighborhood.

The property owner of the house on Holiday Drive is Bingham Investment LLC, and Ron and Carlie Bingham, of Overland Park, were both present at the meeting. The Binghams said they had invested a lot of money to fix up the house, had house rules against parties and hired a local host in Lawrence to help oversee the short-term rental.

The special use permit for Holiday Drive is the first permit with a protest petition and the first permit that the commission had denied. Herbert said he thought the commission’s decision could have unintended consequences. He said he thought the denial could make people less willing to apply for a permit, and that people would instead operate without one.

“I’ll be interested to see what effect that has on people’s willingness to go through the system properly, as Mr. and Mrs. Bingham have done, versus the alternative of flying under the radar — being one of 235 people currently listed on Airbnb,” Herbert said.

The Binghams purchased the house last year, and Ron Bingham said they made $100,000 of repairs, hiring local contractors to replace the windows, roof, HVAC system, and make safety repairs and interior improvements.

“When we got the house, the siding was falling off the house, the windows were leaking, the pipes were freezing in the house,” Bingham said. “It was needing just a lot of repairs, and we took it on.”

The Airbnb advertisement for the Holiday Drive property, which has five bedrooms, indicates the house could accommodate up to nine guests and would cost $400 per night. Conditions of the proposed permit included that the property would remain residential in appearance, comply with the neighborhood’s occupancy maximum of three unrelated adults — no limit if all the occupants are related — and not exceed four guest rooms. The Lawrence-Douglas County Metropolitan Planning Commission voted unanimously earlier this year to recommend that the permit be approved.

Neighbors submitted a protest petition to the permit, which meant that it would have to have been approved by a supermajority of the commission, or at least four commissioners. Sharon Ellenbecker, the neighbor who circulated the petition, said that having an Airbnb in the neighborhood took away what would otherwise be an affordable house and added traffic and people unfamiliar to the neighborhood. She said that was a particular problem because the neighborhood does not have sidewalks, and kids headed to school, bicyclists and people walking their dogs use the streets to walk.

“To me, nine people occupying a house from out of town presents a safety factor for our children,” Ellenbecker said.

Another neighbor, Timothy Buzzell, likened the property to having a “residential hotel” in the neighborhood, but with less oversight than a hotel. He said the transient populations in neighborhoods detracted from the neighborhood character, decreased safety and created noise.